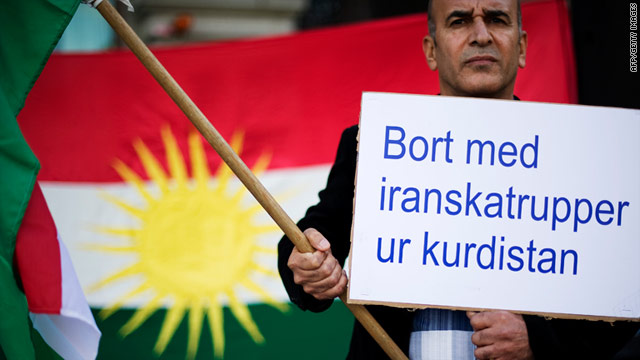 A Kurdish man holds a banner reading 'Iranian troops out of Kurdistan' during a protest in Sweden on September 3, 2011.
STORY HIGHLIGHTS
RELATED TOPICS

(CNN) -- Iranian forces have launched a fresh offensive against Kurdish rebels, with a senior military commander telling a state-run news agency Saturday that 30 rebels were killed or injured in the operation.

Col. Hamid Ahmad, with the Iran's elite Revolutionary Guards corps, told the official Islamic Republic News Agency that the effort began Friday afternoon in the northwest part of the Middle Eastern nation in an area bordering Iraq. He described the mission as ongoing.

"The major operation against (Party of Free Life of Kurdistan, or PJAK) agents in the northwest borders will continue until the purification of the region from terrorists," Ahmad said.

It was not clear in the state-run news agency report whether the rebels crossed from Iraq into Iran.

Iranian forces have repeatedly shelled the border area between Iran and Iraq's autonomous Kurdish region, targeting Kurdish rebels who say they want their own independent country.

Blaming PJAK for violating a ceasefire, Ahmad said that two Kurds who were protecting the group's members had been killed in the latest offensive.

Revolutionary Guard troops also "killed, injured and arrested tens of terrorists" and destroyed a rebel camp near the city of Sardasht, the news agency reported.

Sardasht is a predominately Kurdish town that sits on the Iran-Iraq border.

The military operation includes about 5,000 Iranian troops in the northwest part of the country, and comes two months after Iranian forces reportedly captured "several teams of PJAK (members) who intended to infiltrate Iran to stage terrorist operations," claims IRNA.

Like Turkey and Iraq, Iranian forces have had repeated battles with ethnic Kurdish fighters. The PJAK group is part of an alliance of Kurdish rebel groups that includes the Kurdistan Workers' Party, or PKK, which conducts attacks against Turkey from northern Iraq.

This group is considered a terror group by the United States, though the IRNA report claims that Iranian officials repeatedly have complained such Kurdish rebels are being supported by Washington.