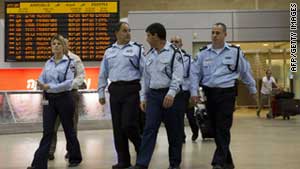 Istanbul (CNN) -- Relations between once strategic allies Israel and Turkey continued to deteriorate Monday as both countries exchanged allegations that their nationals were targeted for intrusive and overly extreme security screening at each other's main international airports.

Some 40 Israelis who landed in Istanbul's Ataturk airport Monday morning were individually questioned by Turkish authorities according to Israeli Foreign Ministry spokeswoman Ilana Stein. She said it was the first time such an incident had occurred with Israelis nationals flying into Turkey.

Another Foreign Ministry official, Yigal Palmor told CNN that Israel was still looking into the incident and seeking clarification as to who gave the instructions for the Israeli passengers to undergo enhanced screening.

Speaking to Israeli news portal Ynet one of the detained Israeli passengers said they were asked a series of questions about their travel and instructed to open their bags and show the contents of their computers.

"They apparently got an order to detain us, one by one. Everyone was in shock; we didn't know what they were going to do to us. Obviously this was done intentionally in order to create an unpleasant feeling" one of the unidentified passengers told Ynet.

Another passenger described Turkish authorities specifically identifying Israelis for screening: "As soon as they saw an Israeli, they told him to move on to questioning. All the Israelis were together and they accumulated the passports in one file... I have never seen them behaving in such disrespect."

A Turkish Foreign Ministry official, speaking on condition of anonymity following diplomatic protocol, would not respond directly to the charges that Israeli passengers were specifically targeted for increased scrutiny, but he pointed out that Turkish passengers leaving Israel were subjected to more intense screening the day before in Tel Aviv's international airport.

"Turkish passengers on the Turkish Airlines flight from Tel Aviv were searched in an unusual manner... and complaints were filed," the Turkish official told CNN. "On the return of the flight to Istanbul it seems Turkish police have just kept and delayed some passengers for passport control, no questioning," he added.

"They were scrutinized in a different matter I guess. In a different manner than the usual," the Turkish official told CNN, but he denied that there was some kind of "tit-for-tat" treatment of passengers taking place.

In report published Monday in the semi-official Anatolian Agency members of a group of Turkish tourists claimed they were forced to undergo additional security screening at Israel's Ben Gurion airport on Sunday as they were preparing to leave Israel.

One male Turkish passenger identified by the last name "Teke" described being asked a series of detailed personal questions followed by a forced strip search in a special security room.

"They forced me to undo my trousers. While I was getting out angrily, I saw that they were taking some Turkish women in these rooms the same way. This made us even more upset. They only did this to the Turks. They only took Turks to the special rooms," Teke told Anatolian.

Eyup Ensar Ugur, the guide for a Turkish tourist group told CNN Israeli airport security singled out Turkish passengers shortly after they checked in their bags at Ben Gurion airport.

"It was mostly psychological. Their search was very detailed right down to a pack of tissues. They were taking out even dirty clothes as they opened suitcases," Ugur said. "They took us in special rooms for a body search... the situation lasted at least three hours. It was very unnecessary. It was as if they received an order to delay the process, to bother the people."

Palmor could not comment on the allegations telling CNN that other than media reports Israel had received no official complaint from either the Turkish government or Turkish citizens. Complaints about excessive security screening and profiling at Israel's Ben Gurion airport are common and have lead to a number of high profile controversies involving foreigners and Palestinians travelling in and out of Israel.

The respective airport incidents come on the heels of Ankara's announcement Friday, that it would expel the Israeli ambassador and other high-ranking diplomats stationed in Turkey within a matter of days. Turkey downgraded relations following Israel's refusal to apologize for the killing of eight Turks and one Turkish-American during an Israeli assault on the Turkish flagged ship Mavi Marmara in 2010. The ship had sailed for Gaza carrying supplies and pro-Palestinian activists seeking to break the Israeli maritime blockade of Gaza.

The blockade was imposed, according to the Israeli military, to prevent the smuggling of weapons to the Hamas-ruled coastal enclave.

A United Nations investigation into the violent maritime event found that the Israeli blockade of Gaza was a "legitimate security measure" in compliance with international law, but it said that Israel had used "excessive and unreasonable" force in the takeover of the ship. Israel insists that its soldiers acted in self-defence after being assaulted by the Turkish activists.

Istanbul is a popular transit hub for many Israelis traveling to and from Israel. Turkish Airlines flies daily flights between Istanbul's Ataturk Airport and Israel's Ben Gurion Airport in Tel Aviv.