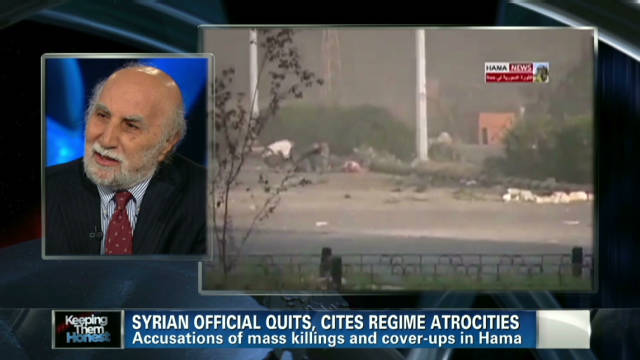 Istanbul (CNN) -- A deadly hail of bullets struck Syrian refugees, as they tried to flee across the border to Turkey on Monday, killing one man and wounding another, the Turkish government said Tuesday.

"Yesterday there was a bunch of people trying to cross the border to Turkey," said a Turkish Foreign Ministry official, speaking on condition of anonymity according to diplomatic protocol. "While one of the groups tried to pass, there were shots fired from the Syrian side, I assume from the Syrian soldiers... two people were shot, one died on the Syrian side of the border, and (his body) was also carried with a wounded guy to the Turkish side."

A video emerging on YouTube showed an apparently dead man lying on the floor with blood leaking from his head. Off camera, a man says in Arabic, "They shot him, the snipers." The video identified the victim as Abdul Salam Hasoon.

The description of the incident and the name of the victim were both confirmed by the London-based Syrian Observatory for Human Rights.

"He was killed by snipers from the Syrian side, while he was crossing the border," wrote the Observatory's Mousab Azzawi in an e-mail to CNN.

According to the Turkish Foreign Ministry, at least 330 Syrians fled on Monday through an old border checkpoint at the Turkish village of Belengoz.

Several Turkish residents living in the nearby Turkish border village of Guvecci told CNN they heard gunfire from the direction of Belengoz on Monday.

The Turkish diplomat said the wounded refugee was rushed to treatment and is now in stable condition in a Turkish hospital.

Throughout the uprising and subsequent government crackdown in Syria, more than seventeen thousand Syrians have fled across the border to Turkey, according to statistics published by the Turkish disaster and management directorate.

A growing number of exiled activists have operated out of Turkey, which has also hosted a number of opposition meetings and conferences.

In a separate online video emerging from Syria, a group of uniformed men identifying themselves as defecting soldiers claimed responsibility for a deadly attack on fellow Syrian security forces on Monday.

Flanked by 11 men in army uniforms holding Kalashnikov rifles, a man identified himself in the video as Lieutenant Zahir Abdul Karim Fraiter of the 7th Division of the Syrian armed forces.

"I have seen with my own eyes the massacres committed by the corrupt regime," Fraiter said.

Fraiter then claimed responsibility for killing security forces and pro-government shabiha militia-men near the town of Maharda.

On Sunday, the Syrian state news agency SANA reported that six army officers and three "civilian employees" were killed after an "armed terrorist group set an ambush at the crossroads of Salhab-Khatab near the town of Maharda... opening fire with machine guns at a military bus conveying a number of officers."

In the video, Fraiter said the attack on government forces in Maharda was retaliation for a military operation against the village of Maarat Hirma and the killing of a political activist named Abdul Samad Issa.

CNN cannot independently verify these claims, because the Syrian government has repeatedly denied requests for journalists to report inside Syria.