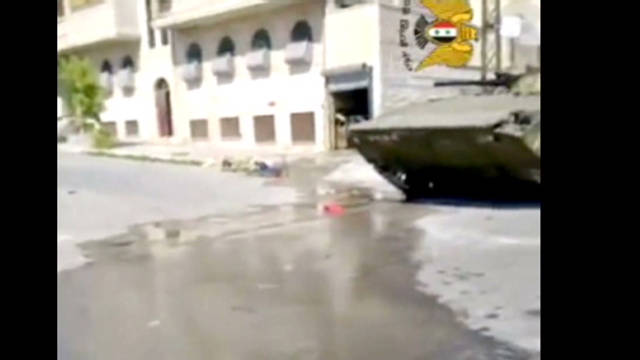 (CNN) -- Activists in Syria say 27 people were killed during demonstrations Wednesday, at least 20 of them in the city of Homs, where tanks and heavy gunfire were reported.

The military presence in Homs is increasing, according to activists with the Local Coordination Committees (LCC). They say 18 trucks loaded with soldiers arrived in the city Wednesday.

Dozens of people were injured in Homs, some seriously, and gunfire continued in some neighborhoods late Wednesday, the London-based Syrian Observatory for Human Rights said.

All landline telephones have been cut off in Homs, according to the group.

Meanwhile, two people were killed Wednesday in the city of Sarmeen, in Idlib province, and another person in the city of Hama, the opposition group said.

Demonstrations also took place in other cities around Syria Wednesday, according to the LCC. The group said anti-government protesters were out in Deir Ezzor, Bokamal, Dara, Aleppo and the suburbs of Damascus.

CNN cannot independently verify the claims because the government has repeatedly denied requests for journalists to report inside Syria.

Meanwhile, the secretary general of the Arab League will visit Damascus after all, according to the official SANA news agency.

But Assistant Secretary General Bin Hili told SANA that Al Araby spoke with Syrian representatives by phone and they agreed to set the visit for Saturday.

The meeting is intended to convey concerns over the killing of protesters.

Protesters have demanded an end to President Bashar al-Assad's regime for months despite violent crackdowns by security forces.

Wednesday's attacks follow a bloody crackdown a day earlier that killed at least 10 people nationwide, including in Homs, according to the Syrian Observatory for Human Rights.

Residents in the city of Aleppo joined the anti-government protests Tuesday after a local well-known scholar died.

The official cause of Ibrahim Salqini's death was a heart attack, according to government-run SANA, but activists questioned the circumstances of his death.

The scholar had signed a document, which CNN has obtained, condemning government violence against religious sites. Other heads of mosques nationwide signed the same document.

Thousands attended his funeral, with some mourners chanting "better death than humiliation," according to an activist and the Local Coordination Committees of Syria.

Syrian security forces fired when protesters reached the cemetery, and several people were injured and many detained, according to the activist.

Officials do not usually comment on opposition allegations concerning the killing or wounding of protesters.

Pressure has mounted on the regime as international leaders demand an end to the attacks on protesters.

Last week, the European Union announced a ban on oil imports from Syria. The EU is a top market for Syrian oil, and the move likely will have a detrimental impact on the embattled regime's oil revenues.

The United Nations has reported more than 2,200 people killed in Syria since February, including more than 350 people after security forces stepped up operations against demonstrators during the Muslim holy month of Ramadan.

The Arab League last week publicly called for restraint and an end to the violence in Syria.

Syria on Monday granted the International Committee of the Red Cross access to a detention facility for the first time since unrest broke out in the country, the committee's president said.