Gadhafi: Nowhere to be found but heard loud and clear 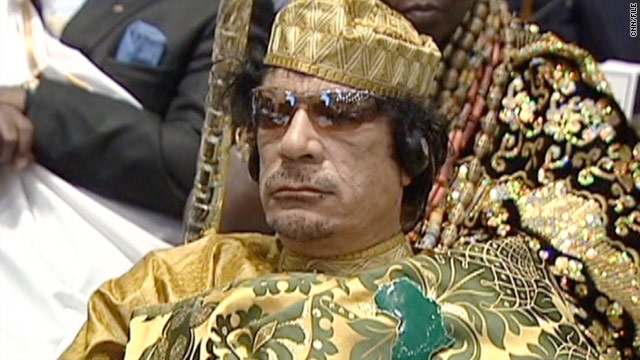 (CNN) -- Moammar Gadhafi no longer has his Tripoli compound or his vast power apparatus. He is a fallen leader, a fugitive wanted by the world's eminent criminal court.

And yet, he still has a voice.

It goes out loud and clear to the entire world thanks to Al-Rai, a privately owned Syrian-based television station that has, in recent weeks, taken over for Libyan state media in fulfilling a role as Gadhafi's mouthpiece.

This week, Gadhafi insisted again he will stay in Libya in an audio message broadcast on Al-Rai. CNN is unable to verify the authenticity of the message.

"NATO will be defeated by force because its financial ability is not enough to proceed with the shelling," Gadhafi said. "They claimed I left to Niger so they can weaken you and destroy your morale."

So why is Al-Rai such a strong supporter of Gadhafi and his son Saif al-Islam Gadhafi, who has also taken to its airwaves?

For starters, Al-Rai is not in the vein of commercial networks such as Al-Arabiya, Al Jazeera or even CNN, said Arab television expert Joe Khalil. It's a blip in the regional plethora of channels: about 500 of them that serve up news and entertainment to the Arab world.

Al-Rai portrays itself as a channel of resistance. Its owner, Mishaan al-Jaburi, was a Saddam Hussein loyalist, and Al-Rai's predecessor, Al-Zawraa TV, became infamous for its 24-hour footage of attacks on U.S. forces in Iraq.

With Al-Rai, the resistance is to NATO and its air bombing campaign in Libya, Khalil said.

"This is the kind of channel that gains from being a platform," said Khalil, an assistant professor of communications at Northwestern University in Qatar.

It has also gained from other channels picking up Al-Rai and rebroadcasting the Gadhafi messages, Khalil said.

Al-Jaburi defected to Syria before the Iraq war in 2003, according to his former assistant, who requested to remain unnamed for security reasons.

He returned to Iraq after Hussein fell and joined a reconciliation council but was implicated in a corruption case involving millions of dollars, and he was suspected of funding the Iraqi insurgency.

He fled Iraq again, this time for Libya, under the protection of Gadhafi.

Indicted in Iraq in 2005, al-Jaburi remains a fugitive with a pending 30-year sentence issued in absentia, said the former assistant.

He eventually made his way to back to Syria, where he started Al-Zawraa, said Mahmoud Al Zeibaq, a Syrian dissident living in Cairo and a former Al-Rai program manager.

Al-Zawraa went off the air in 2007. Arab governments banned it from regional satellites.

But al-Jaburi reinvented himself with Al-Rai, registered under his Syrian wife's name and operating out of a modest office in Damascus. The station broadcasts from a studio in al-Jaburi's house, Al Zeibaq said.

Khalil said there have been reports of Gadhafi sponsoring Al-Rai. Gadhafi has been known to buy up media to polish his image. He maintained close ties with a Lebanese station once sanctions on Libya were lifted, Khalil said.

From the very start of the Libyan uprising, Al-Jaburi declared support for Gadhafi in his weekly show, claiming that the Libyan leader was part of the bloc of countries and forces confronting U.S. ambitions in the Middle East, said Yotam Feldner, director of MEMRI TV, a research organization that specializes in Middle Eastern media.

After the fall of Tripoli, Gadhafi's audio messages surfaced on Al-Rai.

Al-Jaburi said "the hero Gadhafi" broadcasts his messages from a van equipped with satellite transmission equipment that can operate anywhere in Libya.

"I sent a crew to Tripoli at the beginning of the attack to cover the events, and we trained the Libyans on how to use it after our own experience with the Iraqi resistance, which was never detected by the American forces," al-Jaburi said.

But some said that it's not about ideology at all and that al-Jaburi sees only dollar signs in front of him.

"The likes of Mishaan al-Jaburi don't care about viewership," said Safwat El Alem, a professor in political media at Cairo University. "They only care about their pockets after they convince those leaders to finance their operations."

The Syrian regime also has the power to shut down Al-Rai, but Feldner said that it's probably safe to assume that Bashar al-Assad, the embattled Syrian president, has an interest in curtailing the successes of the Libyan revolt.

Whatever the future, for now, the channel is up and running. And though no one seems to know the exact whereabouts of Gadhafi, his voice is loud and clear -- on Al-Rai.