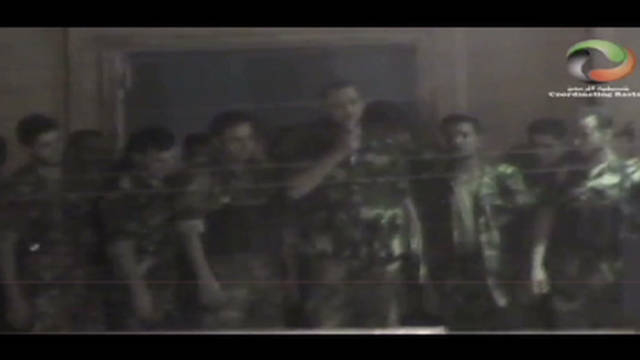 Istanbul, Turkey (CNN) -- The column of military vehicles rolled into the village of Ibleen shortly after dawn on Thursday. Residents said artillery fire and machine gun fire followed soon after.

The troops left a path of destruction in their wake.

A video distributed on the internet by opposition activists shows several burned-out cars, the charred carcass of a motorcycle and a torched pick-up truck. Empty bullet casings litter the ground outside a home that has clearly been ransacked. A thick trail of blood leads from a discarded plastic sandal up a set of crude earthen stairs.

The target of the raid, residents said, were a group of at least eleven soldiers who had taken shelter in Ibleen after defecting from the Syrian army.

"This is the village of Hussein Harmoush," said a resident who only gave his first name Yousuf, to protect himself from government retribution. He was referring to a Syrian army officer who defected months ago and began broadcasting video statements denouncing the Syrian government, before eventually fleeing to neighboring Turkey.

In a phone call with CNN, Yousuf said at least five defector soldiers were killed in the Ibleen raid.

Those casualty figures were roughly corroborated by the London-based Syrian Observatory for Human Rights. The Observatory's director, Rami Abdul Rahman, told CNN the army deserters had been taking shelter in Harmoush's brother's house in Ibleen.

Residents said after destroying the village, security forces arrested at least a dozen people, including children.

"Their age is not more than 10 years," Yousuf sobbed into the phone, speaking of at least five children he said were captured. "We are asking all humans to stop this bloodshed against my people."

CNN cannot independently confirm these reports. The Syrian government has repeatedly refused foreign journalists permission to report inside the country.

CNN has interviewed a number of defector soldiers since the uprising first erupted last March, including one young conscripted sniper who fled Syria to Istanbul after defying orders to fire on unarmed opposition protesters.

In recent weeks, there has been a marked increase in reports emerging from Syria of security forces pursuing and targeting communities that have sheltered soldiers who have broken with the Damascus regime.

Opposition groups claim this week's military offensive into the central city of Homs also was triggered by the defection of soldiers there.

A video purportedly filmed in Homs shows about a dozen uniformed soldiers standing on a balcony, addressing a crowd of hundreds of cheering supporters on the street below. They issue defiant challenges against the government in Damascus.

"We exist for you people, and God willing we will protect you against the tyrant," said a uniformed man who was identified as an officer from Dair El Zor. "We will do that for you because you proved how brave you are and you can protest in a peaceful way and stand in front of the tank without any fear."

It is impossible to tell how many troops have abandoned their posts in recent months. An army captain who deserted and fled to Turkey told CNN there have been thousands of defections and they have been large enough to affect the unity of the army.

But Syria expert Andrew Tabler, author of the book "In the Lion's Den: An Eyewitness Account of Washington's Battle with Syria," said it was too early to say the military was on the verge of collapsing.

"These defections in Homs, they are significant. But are they going to change the reality on the ground? No." Tabler said.

"The question is what will these cases cause other units to do in a similar situation? Could it spread?"

Another development in the five-and-a-half month uprising includes increasingly frequent reports of soldiers who have defected turning their weapons on their former comrades-in-arms.

In a separate online video released earlier this week, a group of uniformed men identifying themselves as defecting soldiers claimed responsibility for a deadly ambush against a bus carrying Syrian troops in the town of Maharda. Syria's state news agency reported six soldiers and three civilians were killed in the bus attack.

Flanked by 11 men in army uniforms holding Kalashnikov rifles, a man identified himself in the video as Lieutenant Zahir Abdul Karim Fraiter of the 7th Division of the Syrian armed forces.

"I have seen with my own eyes the massacres committed by the corrupt regime," Fraiter said.

Fraiter then claimed responsibility for killing security forces and pro-government shabiha militiamen near the town of Maharda. In his statement, he referred to allegations against the regime made by one of the highest-ranking government officials to have publicly broken with the regime.

Last week the attorney general of the city of Hama, Adnan Bakkour, condemned the government of President Bashar al-Assad in a video statement released over the internet. He accused the regime of torturing and killing opposition members and burying hundreds of victims in mass graves.

Opposition activists tell CNN that Bakkour has since escaped to neighboring Turkey. The Syrian government, however, accused "armed terrorists" of kidnapping the judge and forcing him to make false accusations. CNN has so far been unable to independently confirm Bakkour's whereabouts.

What is remarkable, analysts point out, is that so few high-ranking regime officials have defected, after more than five months of defiant protests followed by a crackdown that the United Nations says has claimed more than 2,200 lives.

"Everyone's scared. And the opposition has not put a coherent plan for what happens next," said Tabler, author of "In the Lion's Den."

"They can't jump from the Assad regime ship to another ship unless the other one exists."