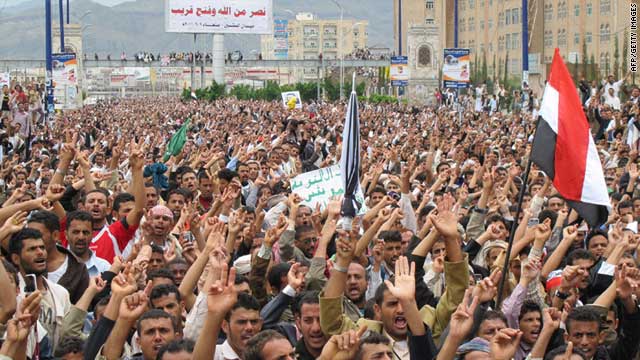 Sanaa, Yemen (CNN) -- More than a million anti-government youth gathered for protests in virtually all of Yemen's provinces, witnesses said Friday, a day the protesters dubbed "Friday of victory from God."

The largest protest was in Taiz, where more than 500,000 went into Freedom Square, numerous eyewitnesses estimated.

"We will not stop marching and protesting. We feel that victory for the Yemeni revolution is near, and our patience will pay off very soon," said Mansoor al-Mukbili, a youth protester in Sanaa, the nation's capital.

He said the regime is gasping its last breath and the protesters will continue seeking peaceful change and denounce any sort of violence.

Fuad Himyari, the head of prayers in Sanaa's Change Square, called on youth protesters to stand firm, saying the battle against the oppressive regime is coming to an end.

Pro-government protests were also witnessed in the capital as President Ali Abdullah Saleh's followers continue to gather, though in small numbers.

More than 50,000 supporters showed up in Sabeen Square, 2 kilometers from the Presidential Palace. Pro-Saleh chants were repeated for more than two hours.

"Saleh, Saleh, we will defend you and support you," his supporters repeated.

Protests demanding the ouster of Saleh have been going on for eight months. The ruling General People's Congress has been continuously urging dialogue.

"In the end the only way to solve the Yemeni crisis is through dialogue. We call opposition forces to the dialogue table," said Hasan al-Lawzi, the information minister.

Abdu al-Ganadi, the deputy information minister, advised the opposition that Yemen is not Egypt and Tunisia, and that no one side will be able to solve the current crisis.

"We need to work together to rid the country from the political stalemate," he said.

Opposition parties insist they will not be involved in any dialogue with the Saleh regime.

"The Gulf power transfer proposal was on the table for months and Saleh refused to sign it," said Ahmed Bahri, head of the political circle for the opposition Haq party. "He was guaranteed immunity and we cannot guarantee he will get it in the end."

The proposal was put forward in May by the Gulf Cooperation Council, made up of six nations on the Arabian Peninsula. Saleh had initially indicated he would go along with it, but then refused to sign.

In the southern Abyan province, government forces are gaining ground in the fight against suspected al Qaeda militants.

The government said troops succeeded Thursday night in taking over al-Kod, a strategic town in the outskirts of Zinjibar, the capital of the province.

The armed militants fled the town and are regrouping as government forces attempt to enter Zinjibar, officials said.