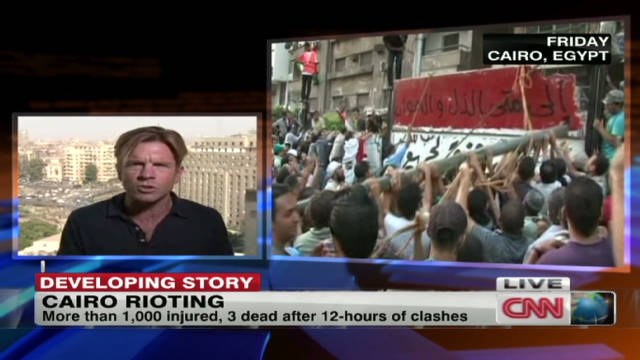 Cairo (CNN) -- An angry crowd lingering near the Israeli embassy in Cairo after an attack on the building a day earlier turned on journalists reporting the incident Saturday, accusing at least one of being an Israeli spy.

As a CNN crew filmed the embassy from across the street, another crew from American public television -- led by Egyptian television producer Dina Amer -- approached the building.

The crew's Russian cameraman was preparing to film the embassy when a woman in the crowd began hurling insults at the TV team, Amer said.

"There was this older lady who decided to follow me and rally people against me," Amer recalled.

"She said 'you're a spy working with the Americans.' Then they swarmed me and I was a target."

A growing crowd surrounded Amer and her colleagues, as they tried to leave the scene.

Mohamed Fadel Fahmy, a producer working for CNN, rushed to help escort Amer through the angry crowd. But suddenly the two reporters were pinned against the railing of an overpass by young men who were accusing Amer of being an Israeli spy.

Yelling "I'm Egyptian," Fahmy managed to pull Amer another 10 meters down the road, until the pressure from the mob overwhelmed the pair.

Amer screamed as she and Fahmy were knocked to the ground and the crowd started to trample them.

Other CNN journalists tried to reach in to help, but were pushed back by a wall of angry men.

Fahmy lay on top of Amer, shielding her with his body.

"I was thinking, how powerless I was because there was no police to save us," Fahmy said. "I was worried that they were going to rape her."

At that moment, a student bystander named Mohammed el Banna called out to the journalists and pointed out a nearby car.

Somehow, Fahmy managed to carry Amer to the open door of the public television crew's car, where two of her female colleagues were waiting just a few feet away.

The mob pounded on the windows and tried to reach into the vehicle as the panicked reporters fumbled and struggled to get behind the steering wheel.

When Margaret Warner, a correspondent with the PBS program "Newshour" managed to get the vehicle moving away from the crowd, men threw stones at the departing vehicle.

Amer had few words to describe the terrifying ordeal.

"They were animals," she said.

Other Egyptian journalists told CNN they were also attacked Saturday while trying to report near the Israeli embassy.

Ahmed Aleiba, a correspondent with Egyptian state television, said he was pursued by civilians and soldiers.

"I had to run because obviously they were targeting journalists," Aleiba said in a phone call with CNN. "They attacked two other TV crews."

"I was in the car getting ready to film. A soldier knocked on the window with his stick and said 'if you don't leave by midnight your car will be destroyed,"" said Farah Saafan, a video journalist with the English-language newspaper Daily News Egypt.

Journalists have been targeted before in Cairo.

On February 2, dozens of journalists of different nationalities were beaten and pursued around the city while trying to report on pro-Mubarak demonstrations. The day descended into one of brutal street violence, as pro-regime supporters backed by men on horses and camels attacked opposition demonstrators on what became known as the "Battle of the Camel."

On Saturday, as some journalists ran for their lives from the Israeli Embassy, the interim government was holding crisis talks with Egypt's ruling military council and top intelligence chief.

Application of the law had lapsed since the overthrow of Mubarak, according to a senior official in the National Security Directorate, who spoke to CNN on condition of anonymity.

One of the five measures announced after Saturday's crisis talks calls on authorities to make "media and political powers accountable for inciting security lapses."

"It's obvious that there is some sort of plan leading to military rule in this country," warned Egyptian state TV's Aleiba. "The next step will be martial law."