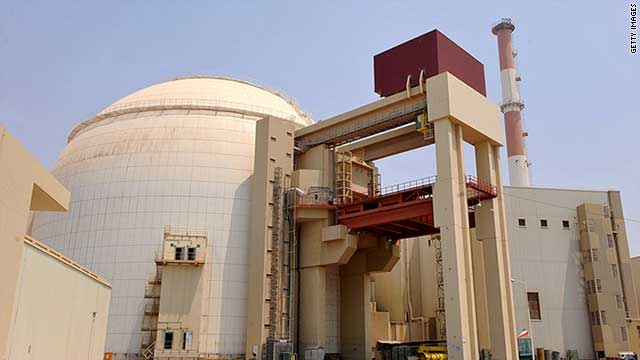 The Bushehr nuclear plant was connected to the national energy grid on September 3, the country's Atomic Energy Organization announced the following day.

Russian Energy Minister Sergei Shmatko, whose country helped build Bushehr and who appeared with Salehi, said the plant was built to international standards and under the supervision of the International Atomic Energy Agency, according to Press TV.

Days before the plant was connected to the grid, the IAEA cited increasing concerns that Iran may be developing nuclear weapons.

The United Nations nuclear watchdog said in a report that Iran continues to defy U.N. resolutions aimed at curbing its nuclear program.

Iran denies that it aims to build nuclear weapons.

The Bushehr plant -- which is civilian, not military -- joined the national grid with a capacity of 60 megawatts, the Atomic Energy Organization of Iran said on its website September 4.

The plant is expected to produce 1,000 megawatts of electricity when fully operational, about 2.5 percent of Iran's current electricity consumption, according to the IAEA.

Iran began the Bushehr plant in 1975, before the revolution that created the current Islamic republic.

The IAEA lists no other nuclear plants under construction in the region, though several other Middle Eastern countries have taken steps toward nuclear power.