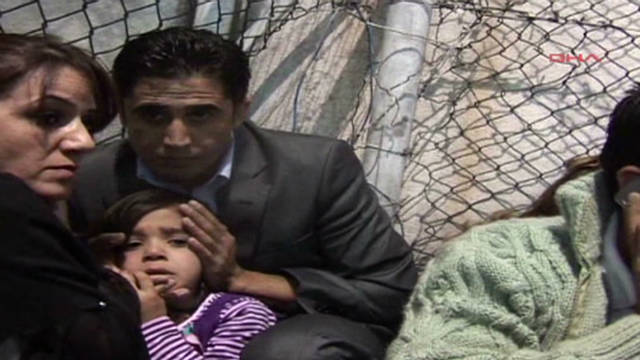 Istanbul, Turkey (CNN) -- Seven people were killed in a series of clashes between police and suspected Kurdish militants in southeastern Turkey that sent guests at a wedding party scrambling for cover, an official said Monday.

The fighting started Sunday night when suspected militants attacked four locations in the town of Semdinli, an official from the governor's office in Hakkari province told CNN.

The attacks targeted the local police and military headquarters, a mountain commando unit and residences of military personnel, said the official, who asked to remain anonymous because he was not authorized to speak with the media.

A wedding celebration nearby was caught in the crossfire. As heavy gunfire and explosions rang out, guests cried and screamed, a video from Dogan News Agency shows. Women and children in colorful dresses ran away from the dance floor, scrambling to take cover. The bride and groom also fled.

Some wedding guests were wounded, the official from the governor's office said.

One soldier, one police officer, three civilians and two suspected militants were killed during the clashes, the official said. Six security forces and six civilians were injured during the firefight, he said.

The bloody, 26-year war between guerrilla fighters from the Kurdistan Workers Party (PKK) and the Turkish state has escalated over the last month.

The Kurdish separatist movement has claimed responsibility for a series of deadly attacks throughout the summer that have claimed the lives of more than a dozen Turkish soldiers.

In August, the Turkish military retaliated, launching a wave of airstrikes and artillery barrages across the border against suspected PKK camps in the mountains of northern Iraq.

The Turkish armed forces claimed to have killed more than 100 rebels in the cross-border attacks.

Turkey has been fighting against the PKK since 1984. More than 30,000 people, mostly ethnic Kurds, have been killed in the conflict.