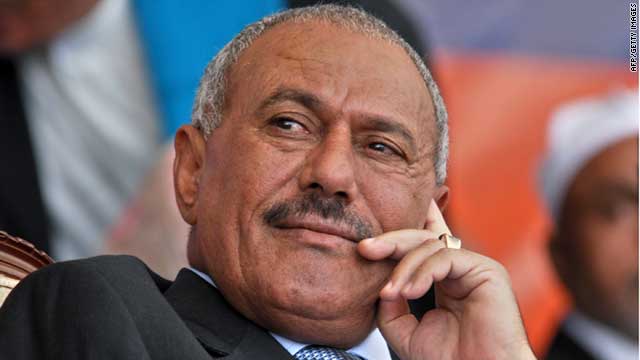 Vice President Abd Rabo Mansou Hadi has "the constitutional authority to conduct a dialogue with the signatories of the initiative made by the countries of the Gulf Cooperation Council for the Arab Gulf States," Saleh said in a presidential decree published by Saba.

The president, who has been in Saudi Arabia recuperating from a bomb attack for more than three months, said he was acting "to reach a political solution to the current political crisis and in order to preserve Yemen's unity, security and stability."

The decree gives Hadi authority to sign the proposal, which would result in early presidential elections intended to ensure a peaceful transfer of power.

The move, however, was not welcomed by opposition parties. Those groups have ignored Saleh's call for dialogue and urged the nation's youths to peacefully escalate their pressure on the regime until it falls.

Mohammed Qahtan, spokesman for the opposition coalition group, Joint Meeting Parties, called on the young people not to comply with the regime's tactics, which he said are intended to weaken their position.

"Any call for dialogue before Saleh signs the GCC proposal comes in an effort by the regime to stall more time for Saleh in power," Qahtan said.

He added, "The Yemeni revolution will continue to go forward."

The JMP announced last week that the GCC proposal was no longer an option, since Saleh had had his chance to sign it but refused.

"The GCC proposal was on the table for Saleh to sign months ago," said Mohammed Basendowah, the president of the opposition national council.

Sultan Barakani, the head of ruling party bloc in parliament, said that the ruling General People's Congress is sticking with the GCC power transfer proposal.

"Opposition forces are not keeping their word and are not willing to come to the dialogue table. We call them to dialogue but they insist on having the crisis continue," Barakani said.

The GCC proposal is for Saleh to transfer his executive powers to Hadi within 30 days. Saleh would then formally resign.

In exchange, Saleh, his family members and close aides would be granted immunity against all potential prosecution.

The proposal was put forward in May by the six nations on the Arabian Peninsula that make up the council. Saleh had initially indicated he would go along with it, but then refused to sign.

A Yemeni government official briefed on the negotiations but not authorized to speak to the news media said the decree has been in the works for the past week and is not a stalling tactic.

"The entire leadership of the ruling party were working together on this, but pressure was also coming from the GCC, the U.S., the EU and the U.N. envoy to come up with a solution to the political impasse in Yemen," the official said.

"This is definitely Saleh saying to the vice president: You negotiate, you sign, and with regional and international supervision, we'll hold early elections. These are clear one, two, three steps. It's not just Saleh saying to negotiate -- that would be stalling."

He said the decree makes it appear that Saleh plans to finish his medical treatment abroad.

Protests demanding Saleh's ouster have been going on for eight months. The General People's Congress has been continuously urging dialogue.