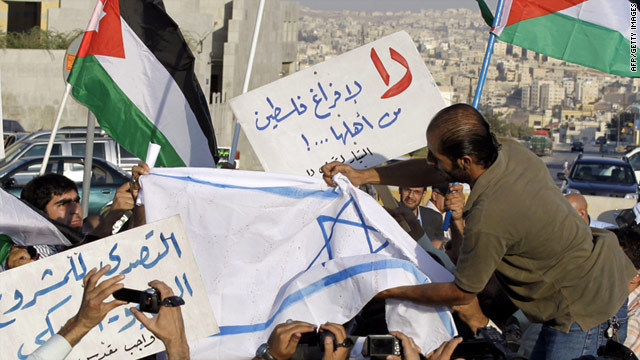 Demonstrators outside the US embassy in Amman on September 14 protest against the US policies in the Middle East.
STORY HIGHLIGHTS
RELATED TOPICS

Jerusalem (CNN) -- The Israeli Embassy in Amman on Thursday sent home all but a skeleton staff due to security considerations, an Israeli Foreign Ministry official told CNN.

The official, who asked not to be identified in keeping with diplomatic protocol, said the staffers typically travel from Amman to Israel every Friday and Saturday. They were sent home a day early this week after last week's ransacking of the Israeli Embassy in Cairo by protesters and plans for anti-Israel protests this week in Amman.

The turnout for Thursday's demonstration in the Jordanian capital, however, was small.

The full embassy staff is expected to return Sunday to work in Amman.

Anti-Israel demonstrations have been taking place in Amman for the past several weeks. One group, called "Million Man March to Close the Israeli Embassy in Jordan," has more than 3,000 members on its Facebook page. The group's motto is: "No Zionist embassy on Jordanian land."

The main group calling for the protests seems to be an organization called Jamee al-Kalouti, or JAK. Dozens of its members have protested at the embassy every Thursday for years to denounce Jordan's ties with Israel. The group calls for the expulsion of the ambassador and annulment of the 1994 peace treaty that established diplomatic relations between Jordan and Israel.

Eyewitnesses reported that security was increased around the already-fortified embassy in the western part of Amman in anticipation of the protest.

More than half of Jordan's 6.5 million residents are of Palestinian origin.

In Cairo on September 9, an estimated 3,000 Egyptian protesters tore down a wall surrounding the building that houses the Israeli Embassy there and entered its offices, tossing papers bearing Hebrew writing from the windows and into the streets.

An Egyptian commander at the embassy told CNN that security personnel were ordered to avoid confrontations with protesters, who cheered the embassy's demolition and chanted calls for the ouster of Israel's ambassador to Egypt. However, the Egyptian Health Ministry told the state-sponsored Al-Ahram newspaper that three people were killed and more than 1,000 injured in clashes between security forces and demonstrators. Amnesty International said 130 people were arrested.

Egypt's military leaders promised the following day to re-establish order. Officials reactivated the country's emergency law, according to Mohamed Hegazy, spokesman for the prime minister. The government also vowed to try those responsible for the attack on the Israeli Embassy, which pushed Israel to withdraw its diplomatic personnel from Egypt, Hegazy said.

Amnesty International warned of the consequences of the expanded emergency law, calling it "the greatest erosion of human rights since the resignation of President Hosni Mubarak earlier this year."

Egyptians have been angry about the killing last month of five Egyptian police officers by Israeli soldiers when Israel went after militants who had attacked civilians near the Israeli-Egyptian border.

Since the revolution that ousted Mubarak in February, many Egyptians have taken to the streets to call for the end of diplomatic relations with the Jewish state.

After the incident, Israeli Prime Minister Benjamin Netanyahu said Israel will stick to its 1979 peace agreement with Egypt.