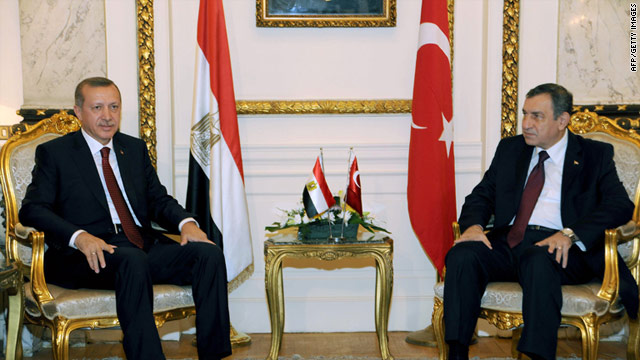 Istanbul (CNN) -- Syrian activists are denouncing the Turkish government in the wake of the Syrian regime's announcement that it has a deserted army officer in custody.

News of his detention by Syria comes amid persistent international consternation with that country's regime for its fierce crackdown on anti-government protesters, a six-month outpouring that has resulted in more than 2,600 deaths.

Omar al-Muqdad, a prominent Syrian opposition activist who is now in exile in Turkey applying for refugee status, said the Turks handed al-Harmoush over to the Syrian secret police.

"The Turkish government is directly responsible for Harmoush's destiny, because Harmoush was a refugee on their territory. They have to be honest about him. ...under international rules, any country that receives him has to protect him," al-Muqdad said.

Al-Harmoush had called on all Syrian soldiers to defect and mobilize against al-Assad. Eventually he fled Syria to Turkey.

Two weeks ago, al-Muqdad called CNN in a panic, saying al-Harmoush had gone missing from the refugee camp in Turkey where he'd been living. At the time, he suspected Syrian security agents had kidnapped the defecting officer.

"I talked to him on the morning of August 29th," al-Muqdad said.

"He said 'I have a meeting with a Turkish security man. When I finish I will call you.' I waited for three days and didn't hear from him. Then after that we discovered that the security man took him and didn't send him back to the camp. They sent him to Syria directly. The Turks made a trick with Harmoush. They caught him in Turkey and sent him to Syria."

The Syrian Arab News Agency said Syrian TV broadcast an interview or what it called a "confession from al-Harmoush" on Thursday night.

Al-Harmoush said he defected because of bloody incidents, but he was not ordered to open fire on civilians.

He said opposition members, including members of the Muslim Brotherhood, contacted him while he was in Turkey. He discussed talk of weapons and money. He said he didn't get the kind of support he was promised. The interview didn't indicate how he returned to Syria.

Another Syrian activist, Omar Idilbi of the Local Coordination Committees of Syria, said that from what Syrian TV is showing, there are signs that al-Harmoush has been tortured.

CNN has previously asked the Turkish Foreign Ministry about al-Harmoush, but Turkish diplomats said they were not familiar with his case.

One official who requested anonymity told CNN the government "on principle" never hands over people who came to Turkey on humanitarian grounds.

There are more than 7,600 Syrian refugees in six Turkish refugee camps and there is daily traffic back and forth across the borders.

In Egypt, the first stop on the Turkish delegation's trip, Syrian activists tried to confront Erdgoan about al-Harmoush. When Erdogan emerged from the headquarters of the Arab League in Cairo on Tuesday, a crowd of angry Syrian activists stood outside the gates chanting "Erdogan coward" and "Erdogan, where is Harmoush?"

Erdogan waved to the crowd, apparently not understanding the question. But one Syrian activist cornered a senior Turkish official next to the government motorcade and demanded to know al-Harmoush's whereabouts.

The Turkish official had no idea what he was talking about. Turkey is critical to the Syrian opposition movement. Dissidents have fled to Turkey to escape the ongoing government crackdown in Syria and have been holding opposition meetings in Turkish cities.

On Thursday, a Syrian opposition council is announcing its creation in Istanbul, the latest in a number of groups claiming to represent the opposition in Syria and abroad.

But now, with Syria announcing it has al-Harmoush in custody, opposition activists said they feel betrayed by the Turkish government.

"I can't trust the Turks any more. They are hypocrites," said al-Muqdad.

"There are a lot of questions that the Syrian government and the Turkish government should answer," said Idilbi, who is based in Beirut, Lebanon.

The importance of al-Harmoush to the Syrian regime became evident September 8, when opposition activists and residents inside Syria called CNN to report Syrian security forces had attacked the village of Ibleen, where al-Harmoush's brother Mohammed lived.

According to the London-based Syrian Observatory for Human Rights, a number of Syrian army defectors had taken shelter in Ibleen while awaiting the chance to smuggle themselves across the nearby border to Turkey.

Video filmed of the aftermath of the Syrian government raid showed blood-spattered houses, burned-out cars and trucks, and a ransacked home.

At least five people were killed in the raid, including al-Harmoush's brother. His corpse was shown in another video released by opposition activists. Thousands of people attended his funeral.

Syria's state news agency claimed responsibility for the raid on Ibleen, saying Syrian security forces had killed a number of "armed terrorists" who had been residing there.

Violence continued Thursday. The Syrian Observatory for Human Rights said security forces killed one person and wounded five others in the Damascus countryside. A volunteer Red Crescent medic who was wounded in the western city of Homs last week has died of his injuries at a Lebanese hospital, the group said.

Last month, al-Assad told the U.N. secretary general that military operations in the country had been halted. The regime has indicated that it wanted to end the fighting and foster stability.

"These promises have been broken promises," Ban said said Thursday.

CNN's Yesim Comert and Tracy Doueiry contributed to this report