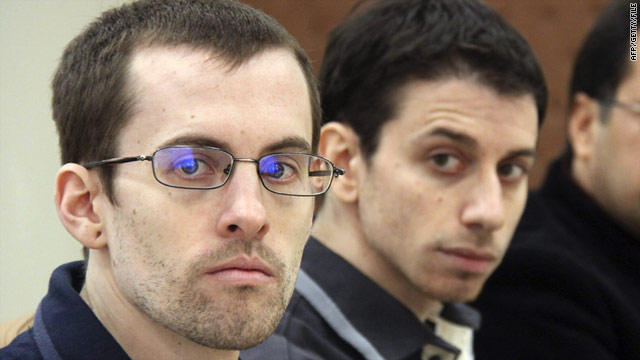 U.S. hikers Shane Bauer (L) and Josh Fattal (shown in February) are reportedly near to being released from prison.
STORY HIGHLIGHTS
RELATED TOPICS

Tehran, Iran (CNN) -- A lawyer for two American hikers jailed in Iran for more than two years said Iranian authorities were close to signing documents that could result in their release from Tehran's Evin prison.

Masoud Shafiee, attorney for Josh Fattal and Shane Bauer, told CNN that he was "very hopeful" they might be released Saturday.

The lawyer raised hopes Tuesday that the pair could soon be freed after their bail was paid.

Shafiee said Saturday he had spoken to a judge in the case who had explained that two judges' signatures were needed on documents to show that bail had been posted.

He said the judge told him the court would call him as soon as a second judge signed the documents.

Shafiee would then need to go to the court to see the signed documents and himself sign a paper to that effect, he said, "and then hopefully the release procedure will begin."

Shafiee said he would not know for sure the amount of the bail or who paid it until he sees the signed document.

Asked if the release might happen Saturday, he replied: "Anything is possible. I am very hopeful that it will be today."

Iran's foreign minister, Ali Akbar Salehi, told the semi-official Fars News Agency that "the judiciary has the last word regarding the release of the two U.S. hikers. Based on reports, the judiciary is about to reduce their punishment."

Salehi also asked the United States to show goodwill by releasing Iranians who are in U.S. prisons, according to Fars.

"We hope that this affair ends with happiness for both the families of the Iranians in U.S. prisons, as well as those of the two American nationals," he said, according to Fars.

The two men and a third hiker, Sarah Shourd, were seized in July 2009, while hiking in the Kurdish region of northern Iraq, after apparently straying into Iran across an unmarked border.

Iranian authorities arrested them, claiming they were spies and had entered the country illegally. Shourd, who is Bauer's fiancee, was released last year for medical reasons, although authorities said her case remains open.

Iranian President Mahmoud Ahmadinejad told NBC's Today show this week that the pair will be released on humanitarian grounds "in a couple of days."

Ahmadinejad is slated to travel to New York for the U.N. General Assembly on Monday, the semi-official Mehr News Agency reported. He is expected to give a speech, meet with several other presidents and with Iranians living in the United States.

Afterwards, Mehr reported, Ahmadinejad will travel to Venezuela along with that country's president, Hugo Chavez.