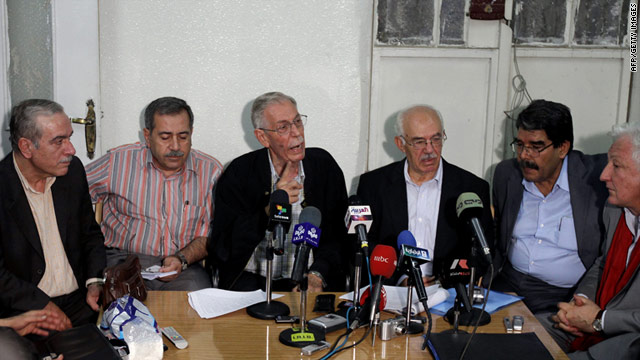 Members of the National Coordinating Committee for Democratic Change hold a press conference in Damascus on Sunday. They called for the continuation of popular protests to overthrow the "tyrannical" regime in power in Syria.
STORY HIGHLIGHTS

(CNN) -- At least four people were killed across Syria on Sunday, the Local Coordination Committees reported, as violence between protesters and Syrian security forces continued unabated.

The LCC, an opposition activist group that organizes and documents anti-government demonstrations, said that two people were killed in Idlib and one person each in Daraa and Homs.

Among the dead was an 11-year-old child, who had been wounded in the head by gunfire, the LCC reported.

CNN could not independently confirm the claims.

The government claims its security forces are battling terrorists, intent on targeting civilians and fomenting unrest.

At least 2,978 people have been killed in Syria since mid-March, according to the LCC.

The U.N. Office of the High Commissioner for Human Rights has put the death toll at around 2,600.

Also Sunday, a video surfaced on YouTube, showing five men dressed in military uniforms, sitting in chairs and on a couch. In the video, the men -- who identify themselves as belonging to the Khaled Bin Walid Brigade -- condemn the arrest of Lt. Col. Hussein al-Harmoush.

Three months after he first appeared in an Internet video -- in uniform, denouncing his government and calling on fellow soldiers to rebel -- al-Harmoush was back on television last week, this time in a televised confession on Syrian state TV.

"We urge international human rights groups to immediately intervene," one of the men in the Sunday video read from a statement.

CNN could not independently confirm the authenticity of the video.

On Saturday, a demonstration was held at the funeral of a Syrian Arab Red Crescent volunteer, who died from his wounds Friday almost one week after being injured attempting to transport an injured protester in Homs, said the humanitarian organization.

Two other volunteers were injured in the same incident, according to the International Committee of the Red Cross, which called on those involved in the violence in Syria to respect and protect medical personnel.