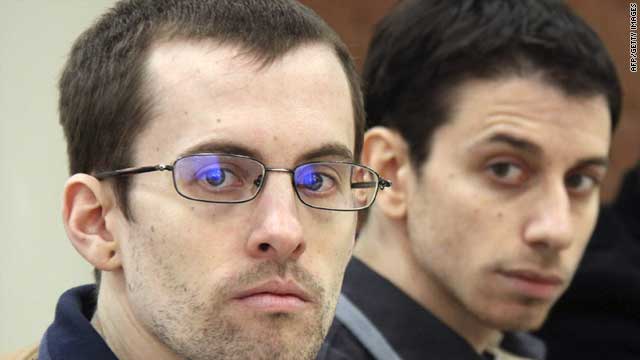 U.S. hikers Shane Bauer (L) and Josh Fattal (shown in February) were taken into custody along the Iran-Iraq border in July 2009.
STORY HIGHLIGHTS

(CNN) -- A prominent group of Muslim American and Christian leaders are scheduled to return to Washington Monday, following a six day visit to Iran where top government and clerical officials indicated to them that two American hikers would be released.

"Our goal has been to foster interfaith ties, build a system of understanding and ask the Iranian leadership to show compassion and mercy for the American hikers by allowing them to come home," said Nihad Awad, national executive director of the Council on American Islamic Relations (CAIR) who went to Tehran last week as part of a religious delegation.

"The delegation was informed by the Iranian authorities that its work prior to this trip and during its current stay in Iran was very helpful and important in the decision to release the hikers," according to a CAIR statement released Sunday. Awad told CNN the delegation traveled to Tehran at the invitation of President Mahmoud Ahmadinejad.

The appeal for the release of Shane Bauer and Josh Fattal began with a series of personal letters addressed to Ahmadinejad and other Iranian leaders in September 2010, CAIR spokesman Ibrahim Hooper said.

In May, boxing legend Muhammad Ali joined more than a dozen prominent Muslim American and various interfaith leaders -- including CAIR -- at a news conference in Washington to publicly ask for the release of the two hikers.

Their appeal to the Supreme Leader of the Islamic Republic of Iran, Ayatollah Sayyid Ali Khameni, was endorsed by the group, which has maintained a dialogue with clerical leaders in Iran, said Awad.

Last week, Awad and three other members of the delegation, boarded a flight to Tehran with a stop in Istanbul, Turkey.

Their visit this week included meetings with Iranian religious scholars and leaders in the holy city of Qom and a meeting on Saturday with Ahmadinejad, said Awad.

"We can only hope the two men are freed soon on humanitarian grounds and that our visit fosters a better dialogue between Iranian and American leaders of faith," he said.

The delegation was granted permission by government officials to visit Baur and Fattal in prison on Sunday but their request was postponed, said Awad.

The delegation also met with family members of Iranian citizens held in the United States adding that government officials there emphasized the need to work more effectively at "securing the freedom of Iranians in American jails," Awad said.

The two men, along a third hiker, Sarah Shourd, were arrested and taken into custody along the Iran-Iraq border in July 2009 and charged with espionage. Bauer and Fattal, both 29, were tried and sentenced last month to three years each for illegal entry into Iran and five years each for spying for the United States.

The Americans say they accidentally crossed into Iran when they veered off a dirt road while hiking near a sight seeing venture in the Kurdish region of northern Iraq. They have denied the charges and appealed the sentence while serving time in Tehran's Evin prison. Ms. Shourd, was released last year on humanitarian grounds.