All you need to know to be a Davos delegate 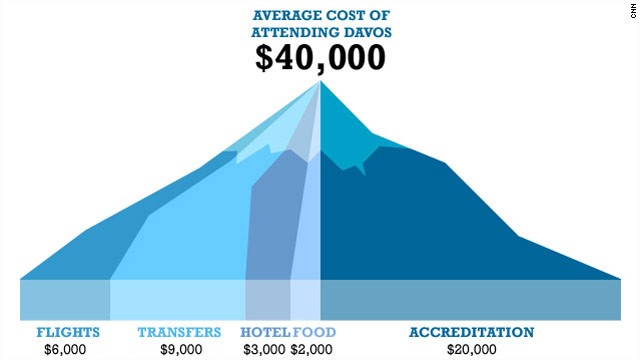 The World Economic Forum is strictly by invitation only, with 2,600 participants representing over 100 countries. The roll call includes CEOs and representatives from the world's biggest corporations; politicians and heads of state from the G20 and other key countries; technology innovators; social entrepreneurs; philanthropists and media companies.

Davos: What to expect

However these special invitations -- or white badges -- are not free for everyone. Unless you're an anchor for one of the many broadcasters covering the event; an academic; a faith leader; a Young Global Leader (young people with great potential selected by the WEF from all fields of business); a social entrepreneur; or from an NGO, the average cost to a business to send each delegate is close to a whopping $20,000.

Getting to this small ski resort, nestled in a picturesque valley high up in the Swiss Alps 150 km south-west of Zurich, is not for the budget traveler. For a delegate arriving from New York this week flying business class, the price comes in at between $4,200 and $5,300.

The alternative would be a limousine which would cost 650 Swiss Francs ($689) for a one-way trip. However corporate CEOs may choose to come by helicopter, which costs around $9,500 for a return flight.

Finding accommodation in Davos during the week of the World Economic Forum is not easy, with a limited number of large hotels. Predictably tariffs reflect the resulting demand/supply imbalance, with a room in a modest three-star hotel coming in at around 500 Swiss Francs ($530) per night.

Those with a considerably bigger budget often choose to rent out whole apartments or chalets. A chalet sleeping up to ten people for the week can command as much as 60,000 Swiss Francs ($63,600) - though catering might just be included.