Part of complete coverage on
Election Center
SHARE THIS 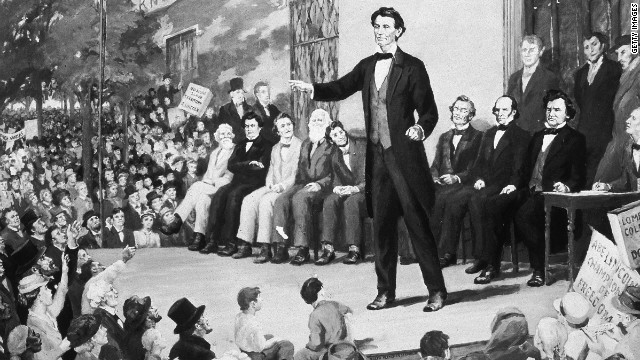 Editor's note: John Avlon is a CNN contributor and senior political columnist for Newsweek and The Daily Beast. He is co-editor of the new book "Deadline Artists: America's Greatest Newspaper Columns."

(CNN) -- The debates this presidential primary season have been less like Lincoln-Douglas than former heavyweight champ Buster Douglas -- punch-drunk pugilism, providing entertainment and some great upsets along the way.

But for all the excitement of the fights, there is a civic cost to the radioactive rhetoric that gets thrown out to excite the conservative crowds.

It's not just that the most irresponsible candidates can play to the base and get a boost in the polls, while more sober-minded candidates like Jon Huntsman fail to get attention. The real damage is to the process of running for president itself. Because when low blows get rewarded, the incentive to try to emulate Lincoln -- holding yourself to a higher standard -- is diminished. And one barometer of this atmospheric shift is in the increasingly overheated rhetoric by candidates attacking the current president. This serial disrespect ends up unintentionally diminishing the office of president itself.

Look, I know that politics is a full-contact sport: Elbows get thrown and egos get bruised. But ask yourself if Ronald Reagan ever called Jimmy Carter a socialist or a communist on the stump. Sure, there were deep philosophical and policy disagreements between them, and Carter was called a failed president many times. But there was a lingering respect for the office that retained an essential bit of dignity. It was only the far-right fringe who indulged in the kind of rhetoric we now hear routinely from presidential candidates.

For example, Newt Gingrich gained steam early in the primary process by accusing President Obama of having a "Kenyan anti-Colonial mindset," and invoking the specter of a "Obama's secular socialist machine." As a highly compensated historian, Newt should have known better than to say that Obama is the "most radical president in American history." But then accuracy -- or even aiming in the general vicinity of the truth -- isn't the point.

Rick Santorum raised eyebrows this past weekend for saying Obama wants to impose a "phony theology" on America. Santorum has since tried to clarify that he was not trying to raise doubts about the president's religion and I'll take him at his word. Likewise, when Santorum compares GOP primary voters to members of the "greatest generation" called to act against the rise of Nazi Germany, I'll assume that Santorum isn't intentionally comparing the president to Hitler.

But a month ago, when a Santorum supporter accused Obama of being "an avowed Muslim" who "constantly says that our Constitution is passé" and "has no legal right to be calling himself president" -- Santorum did nothing to correct her.

Instead, he told CNN: "I don't feel it's my obligation every time someone says something I don't agree with to contradict them."

But I think standing up for the truth in the face of unhinged hate is part of a potential president's job. So did John McCain.

Four years ago, at the height of the general election, when a supporter called then-candidate Obama an "Arab," McCain corrected her. He said, "No, ma'am. He's a decent family man ... (a) citizen that I just happen to have disagreements with on fundamental issues." That's the voice of a loyal opposition, putting patriotism above partisanship.

Even the sober-minded Mitt Romney has gotten into the hyper-partisan pandering game lately. Maybe he's trying to compensate for a lack of enthusiasm on the far-right with red meat rhetoric, but the effect is desperate.

For example, when Mitt was barnstorming through Florida, a standard part of his stump speech was this: "Sometimes I think we have a president who doesn't understand America." This line was straight out of the "Alien in the White House" playbook, a riff that reinforced the worst impulses of some in the audience, as one woman at a Romney rally named Katheryn Sarka eagerly reaffirmed when I asked her what she thought of the line: "Obama doesn't understand America. He follows George Soros. Obama is against our Constitution and our democracy."

After his big Nevada win, this line of Mitt's scripted victory speech stood out: "President Obama demonizes and denigrates almost every sector of our economy." Romney knows this isn't true, but he's been convinced that it works and he seems to be willing to say whatever it takes to make the sale.

Here's what's most troubling about this trend: It doesn't seem remarkable anymore. For the candidates and many in the press, it is just the new normal, the cost of doing business. The overheated rhetoric simply reflects the conversation that's been going on at the grassroots for a long time.

Like a frog in a slowly boiling pot of water, we don't realize that the heat is killing us until it is too late -- except that the casualty here is the quality of our civic debate and the bonds that are bigger than partisan politics.

It's naïve to think it will stop when Mr. Obama is no longer president, whether that is in one year or five. Because the next Republican president will inherit the political atmosphere that's been created and find that it is almost impossible to unite the nation absent a crisis. Some Democratic activists will no doubt take a tactical page from recent conservative successes. This cycle of incitement -- where extremes inflame and empower each other -- will make our politics more of an ideological bloodsport and less about actually solving problems.

Perspective is the thing we have least of in our politics these days. But perspective is what the presidency is all about -- rising above divisions and distractions to make long-term decisions in the national interest. By pouring gasoline on an already inflammatory political environment, the GOP presidential candidates not only diminish themselves, they diminish the process of running for president, and make it less likely that they would succeed in uniting the nation if they actually won the office.

The opinions expressed in this commentary are solely those of John Avlon.