London (CNN) -- Jurre Hermans, the 11-year-old Dutch boy who entered the £250,000 ($400,000) Wolfson Economics Prize with a pizza-based plan for saving the eurozone, did so because he had an idea and the winnings sounded "very attractive," he told CNN.

Jurre received a €100 ($131) gift voucher and special mention when the prize shortlist was announced Tuesday for his detailed entry -- including a picture, below -- showing how debt can be exchanged for slices of pizza.

Exiting the euro: As easy as pizza?

The competition was launched in October by Simon Wolfson, the man behind British retail chain Next, to try and find ways to deal with a collapse of the euro -- the currency tying together 17 European countries. The euro has been under intense pressure since Greece was forced to take a bail-out from its eurozone peers and the International Monetary Fund almost two years ago.

Through his father Julius, Jurre told CNN he had an idea to solve the euro crisis and also thought the prize money sounded "attractive."

Jurre, the youngest entrant to the prize, proposed Greece should leave the euro, with the Greek people slotting their funds into a bank "exchange machine" and getting drachma -- the Greek currency before the country joined the euro in 2001 -- back.

Jurre noted the "clever part" of his idea was that the Greek people would not want to change their euros for drachma, because they know the currency would depreciate. However, if they hide their euros, Jurre said they should be slapped with severe financial penalties.

Wolfson: Why Europe needs to think about a euro collapse

Jurre wrote: "In this way I ensure that all Greeks bring their euros to a greek bank and so the greek government can pay back all the debts. I hope my idea helps you!!!!"

Julius Hermans said he was proud his son thought about the world's problems and came up with solutions.

However, Jurre told CNN he plans to be a zoo director rather than an economist, because he loves animals. He also wants the euro to continue.

A list of the Wolfson finalists and their plans can be found here. The winner will be announced on July 5. 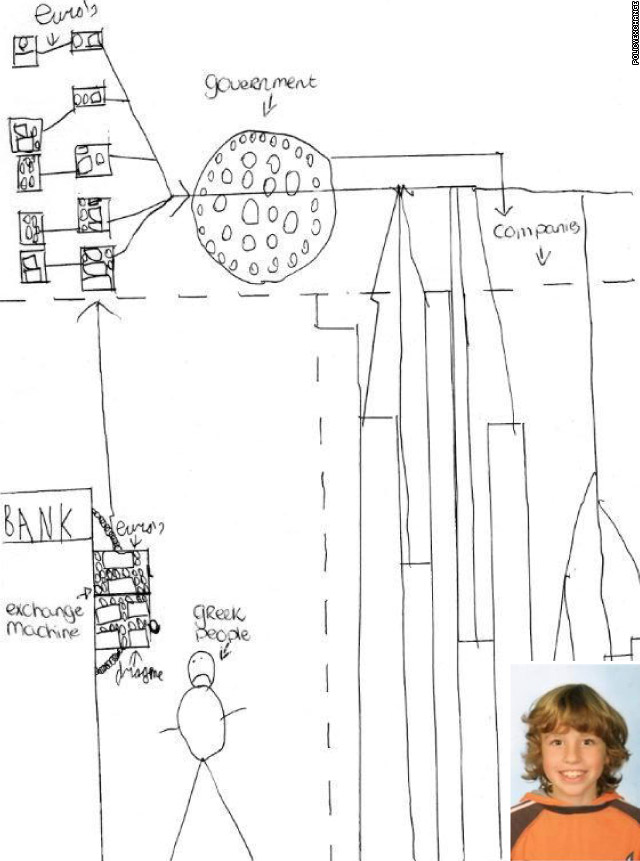