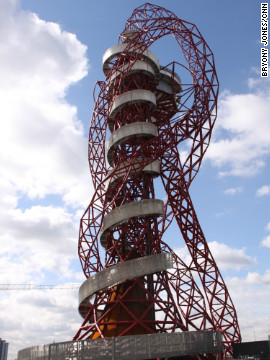 The Orbit Tower at London's Olympic Park was unveiled by the city's mayor Boris Johnson. 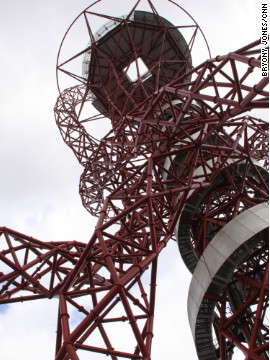 Johnson claimed the swirling, bright red sculpture, was "more complex" than the Eiffel Tower, and "endlessly rewarding" for the viewer. 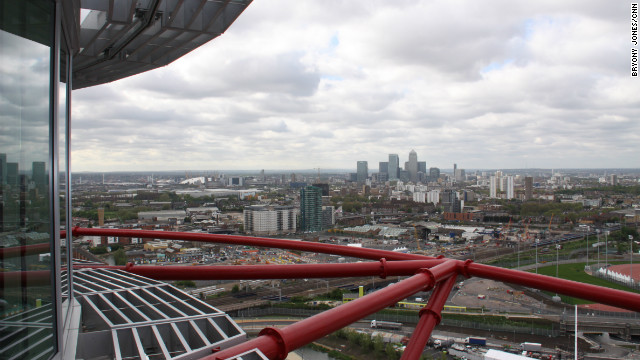 Visitors will climb 455 steps -- or ride one of two elevators -- to two observation platforms. 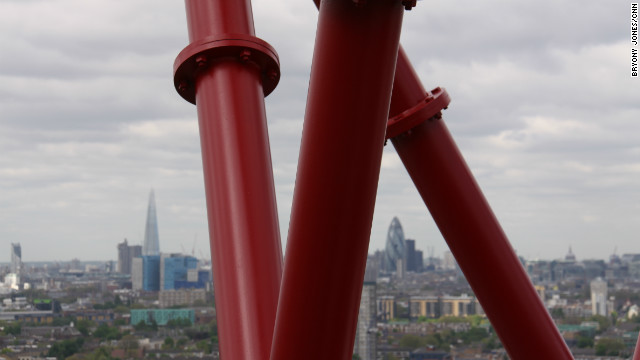 Some of London's most famous landmarks, including the Shard, the Gherkin and St Paul's Cathedral, can be spotted from the top. 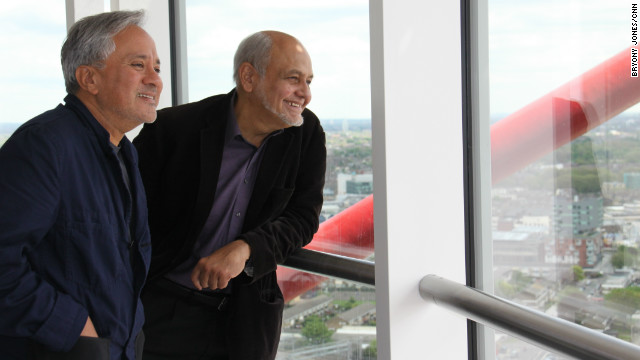 The sculpture was the brainchild of artist Anish Kapoor and designer Cecil Balmond. 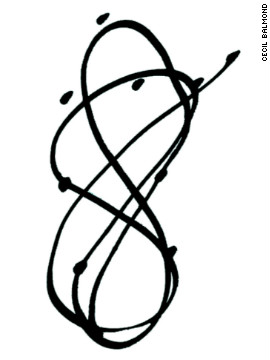 Cecil Balmond's original sketch for the Orbit Tower shows how the design has evolved over the past three years. 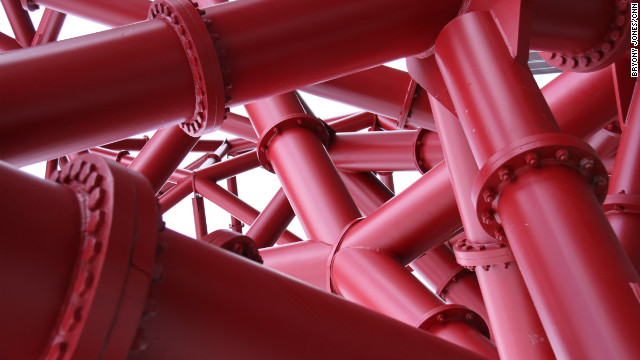 Anish Kapoor said he chose red -- a color that features in much of his work -- to make sure the sculpture stood out among the grey and white Olympic venues. 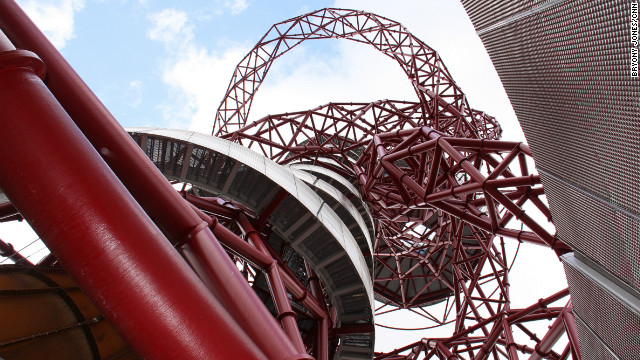 The swirling, swooping design has been compared to everything from a hubble-bubble pipe to a rollercoaster. 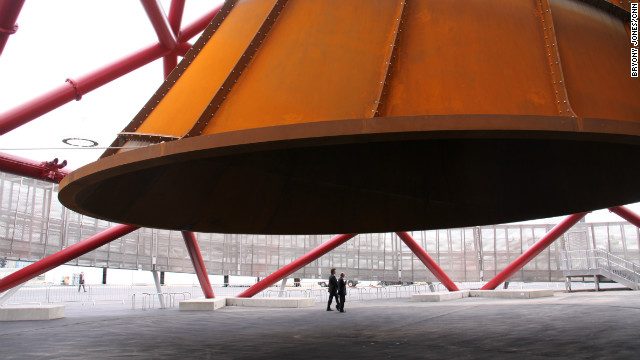 It also features a large trumpet-like structure at the base. 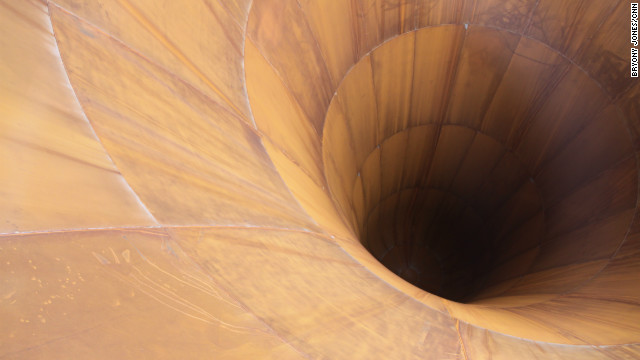 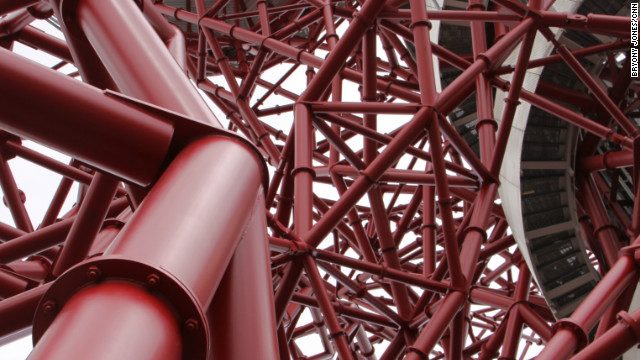 Visitors will be charged £15 (£7 for children) to ascend the tower -- a figure Kapoor admits is expensive. 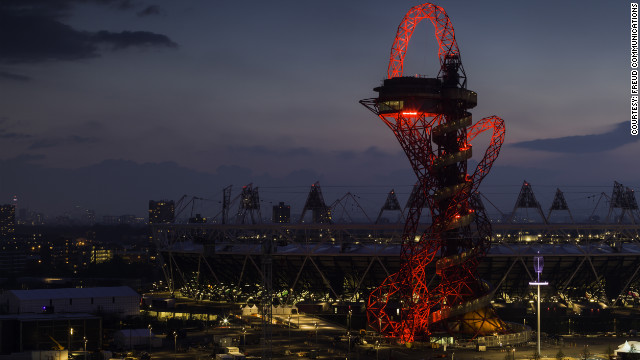 London (CNN) -- It may look more amusement park than Olympic Park, but the twisting red metal tower at the heart of the London 2012 Games site is no helter-skelter -- it's a massive piece of contemporary art named the Orbit.

The sculpture, created by artist Anish Kapoor and designer Cecil Balmond, has become a common sight on televisions across the globe in recent days, snaking up through the sky alongside the Olympic Stadium.

But while many visitors to the park have been happy to study the swirling structure from the ground, or to ride to the top and enjoy the sweeping views it offers across London, others aren't so sure.

"I think it's amazing, it looks like a roller coaster," Raven, an 11-year-old local schoolgirl, told CNN on her first visit to the tower.

"It's so ugly it becomes interesting," another Olympics fan said this week after visiting the sculpture.

Earlier this year when the Orbit was first unveiled, London's mayor claimed it was better than the Eiffel Tower.

Boris Johnson said the artwork, which rises up next to the Olympic Stadium at Stratford in the city's East End was "a masterpiece of design and engineering."

"It endlessly repays the viewer, it is a very rewarding thing to look at. The Eiffel Tower is very simple, the Shard, behind me, is a piece of cake -- any child of two could do that -- this is much more elaborate, more sophisticated, more intriguing and complex," he told CNN.

The tower stands 114.5 meters (375 feet) tall, making it Britain's biggest sculpture, more than twice the height of Nelson's Column, almost six times the height of the Angel of the North, and 22 meters taller than the Statue of Liberty.

Johnson and Lakshmi Mittal, CEO of steelmaker ArcelorMittal, joined forces to champion the creation of a large-scale sculpture at the Olympic Park -- after meeting in a cloakroom at Davos.

"It started as a small project, a casual discussion." Mittal told CNN in May. "It was just a scribble on a piece of paper. But it expanded and expanded into this exciting project." 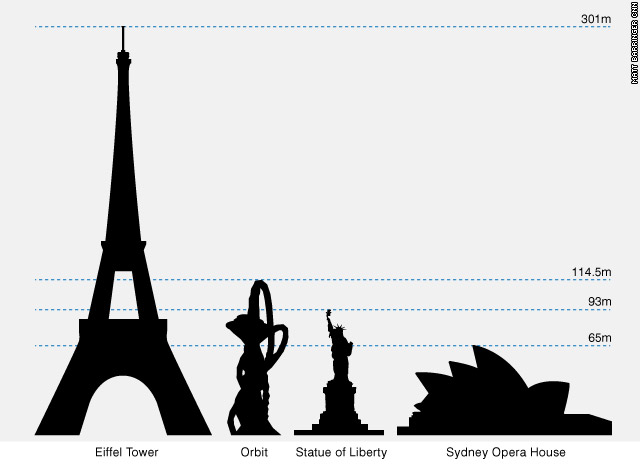 Mittal's company stumped up more than £19 million ($30 million) of the £24 million cost of the structure, providing steel from their plants across the globe.

"The Olympics are a global games -- the whole world participates, 202 countries. ArcelorMittal has businesses in so many countries around the world and so I wanted every one to participate," he said.

Kapoor and Balmond won a competition to design the piece, and have watched it rise from the one-time wasteland, as the Olympic venues around it have also taken shape.

Kapoor said the initial brief called for a tower on the Olympic site, "100 meters tall, or more, and we've done more," explaining that the work "questions the concept of what towers can be."

"As you walk up, around and through it, it's as if the object is happening around you," he said when the sculpture was completed, adding that the Orbit "demands, requires, needs public participation."

"It's all about being here, being involved," he told CNN.

The artist conceded that the £15 entry fee (£7 for children) was high, but said it had been an expensive project, and that he hoped it would eventually be free, allowing more people to visit.

Designer Balmond said the pair intended the sculpture to last far longer than the few weeks of the Olympic Games.

"We hope it will be a monument for London, that will stand for 50 years -- though it might need a paint job by then -- and that it will be a beacon, drawing people to the area."

Kapoor said he was ready for criticism: "When you add such a big edifice to London's skyline, necessarily, people will scrutinize it, and some will be critical, and that's part of the process. We will see..."