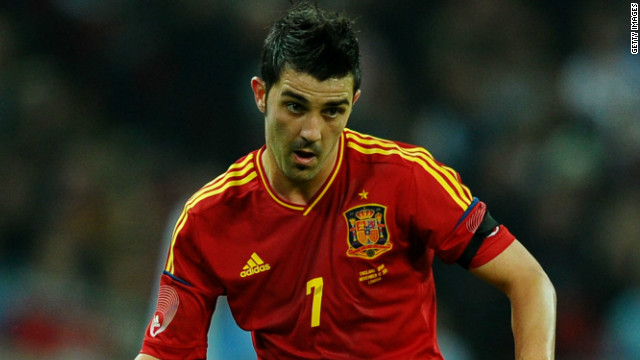 Spain striker David Villa has admitted defeat in his bid to be fit for Euro 2012.
STORY HIGHLIGHTS

(CNN) -- David Villa was top goalscorer at Euro 2008 as Spain secured a first major championship in 44 years, but the world champions' all-time leading marksman will not be part of next month's title defense in Poland and Ukraine.

Villa, who has scored 51 international goals, has been out of action since December, when he fractured a bone in his left leg while playing for Barcelona at the FIFA Club World Cup.

The Spanish Football Federation's website has confirmed that the 30-year-old will not be fit enough to be part of coach Vicente del Bosque's 23-man squad, which will be named on Sunday.

Who are European football's 'Most Valuable Players?'

"Villa spoke with the national team coach after the team arrived (for a training camp) in Schruns, Austria," it reported.

"After not getting in the final practice and development desired, David Villa spoke with Del Bosque, who relayed that although it was Villa's wish to be with the team in Poland and Ukraine, that his physical state was 'not as good' as would be desirable."

It is the second setback for Del Bosque, who will also be without injured key defender Carles Puyol for the June 8-July 1 tournament.

Villa , who scored five goals as Spain won the 2010 World Cup, expressed his gratitude to fans for their continued backing.

"Thanks to all of you for your support," the former Valencia striker wrote on micro-blogging site Twitter. "I will continue working to return to play as soon as possible with Barca and the Spanish national team."

Villa's absence was felt by Barca, who missed out on the Spanish league title for the first time in four years and finished second -- nine points behind archrivals Real Madrid.

With Villa unavailable, the door is now open for Fernando Torres to stake a claim for a return to the starting lineup.

The Chelsea striker, who scored the only goal as Spain beat Germany 1-0 in the Euro 2008 final, has been called into the squad for Saturday's friendly against Serbia.

Fernando Llorente, the Athletic Bilbao forward who starred during the Basque club's run to the Europa League final, is also hoping to lead Spain's frontline.

Four Four Two magazine's Tim Stannard explained how the absence of Villa, captain Carles Puyol and the loss of form of several key players could mean Joachim Low's Germany are now favorites for the tournament.

"Germany moved into the favorites position, although they do have a very tough group to get through," said Stannard.

"It's not just that Puyol is out. Gerard Pique is very much out of form, there are doubts about who is going to play at full back. Iniesta and Pedro aren't in very good form and neither is Fernando Torres."

Stannard tipped Llorente to fill Villa's boots, although he will first have to emerge unscathed from Bilbao's Copa del Rey final against Barcelona on Friday.

"The Copa del Rey final is another huge blitz to Del Bosque at the end of a badly organized campaign so far for Spain," he said.

Drawn in Group C, Spain will first face 2006 World Cup winners Italy in Gdansk on June 10 before playing Croatia and the Republic of Ireland.

Can English football reinvent its "warrior" style to emulate the success of freeflowing football nations such as Spain and Germany?
Football's biggest grudge matches
updated 8:02 AM EDT, Fri June 22, 2012

The Germany-Greece quarterfinal at Euro 2012 is just one example of when political and sporting lines become blurred.
Who will win Euro 2012?
updated 12:01 PM EDT, Wed June 20, 2012

CNN's panel of football experts look at the Euro 2012 contenders ahead of the quarterfinal stage.
Euro 2012: Pinto's magic moments

UEFA's decision to fine Nicklas Bendtner for revealing a sponsor's name on his underpants during Euro 2012 may have opened a can of worms.
Has 'boring' Spain lost its mojo?

CNN's Alex Thomas wonders how such an exciting football team as Spain could become, as heretical as it may seem to say... boring.
Will 'disease' spread to World Cup?
updated 11:43 AM EDT, Thu June 14, 2012

Fighting in the streets of Warsaw during the opening week of Euro 2012 is a stark reminder that football's "disease" has not been cured.
Should players know their anthems?

CNN's Amanda Davies argues that footballers are picked for their sporting ability, not because they can do justice to their national song.
When Poland (almost) ruled the world
updated 9:46 AM EDT, Fri June 8, 2012

Poland kicked off Euro 2012 as one of the underdogs. It is a far cry from the days when the nation was one of the most feared teams in world soccer.
Euro 2012 stars and their tattoos
updated 1:59 PM EDT, Thu June 7, 2012

CNN World Sport looks at the challenges that teams and host countries Poland and Ukraine faced to get to the Euro 2012 cup.
Will racism overshadow Euro finals?
updated 11:51 AM EDT, Thu June 7, 2012

As national teams arrive in Poland and Ukraine, will the tournament be a football success or overshadowed by racism?
UEFA's complicated adventure?
updated 3:17 PM EDT, Thu June 7, 2012

If the pre-vote predictions had been accurate, football heavyweights Italy would be preparing to host the 2012 European Championship.
Pedro Pinto's Euro 2012 predictions

CNN's Pedro Pinto predicts who will fly and who will flop at Euro 2012 in Poland and Ukraine. Have your say here.
Can Ronaldo fire Portugal to glory?
updated 1:34 PM EDT, Wed June 6, 2012

Portugal have never won a major tournament at senior level, could this be the year the Euro 2012 underdogs shine?
Can GPS help reduce player burnout?
updated 2:59 PM EDT, Thu June 7, 2012

Some of Europe's best footballers will be missing in Poland and Ukraine this month, as the effects of another grueling season takes its toll.
Can Spain repeat Euro success?
updated 4:40 PM EDT, Tue June 5, 2012

Check out who is playing who, and where, as 16 teams compete at the European Championship in Poland and Ukraine.
Euro hosts reply in race row
updated 3:20 PM EDT, Thu June 7, 2012

UEFA president Michel Platini tells CNN he thinks Chancellor Angela Merkel will attend the final of Euro 2012 in Ukraine -- if Germany reach it.
Prison, persecution and football
updated 11:10 AM EDT, Tue May 8, 2012

It was supposed to be a symbol of Ukraine's development, but next month's Euro 2012 tournament has become mired in controversy.
Euro 2012 finals nation map
updated 11:34 AM EDT, Mon April 30, 2012

Poland and Ukraine will host the European Championships for the first time in 2012, welcoming 14 other teams and football fans from across the continent.
Top 10 memorable Euro finals moments
updated 11:52 AM EST, Fri December 9, 2011

The build-up to next year's finals has truly begun, so here is CNN's guide to our top 10 most memorable European Championship moments.
Countdown to Euro 2012: The stadiums
updated 11:55 AM EST, Fri December 9, 2011

With less than 200 days to go until Euro 2012 football fans across Europe can start to look forward to the tournament in Poland and Ukraine.