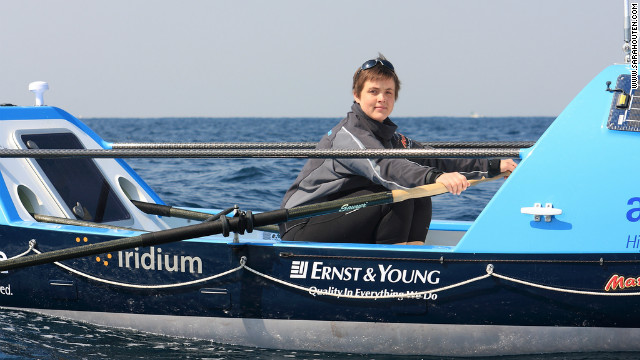 British adventurer Sarah Outen is seeking to become the first woman to row solo across the North Pacific. 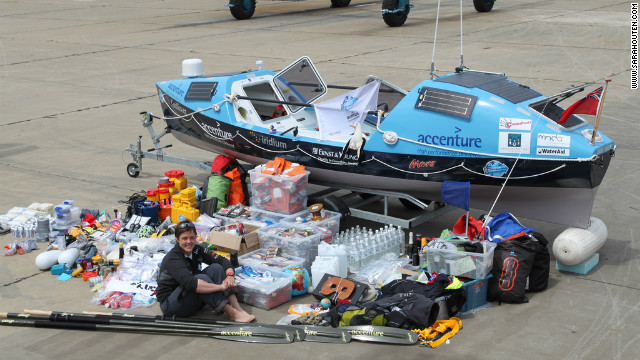 Outen will cross the Pacific on a custom-made seven meter boat named Gulliver. 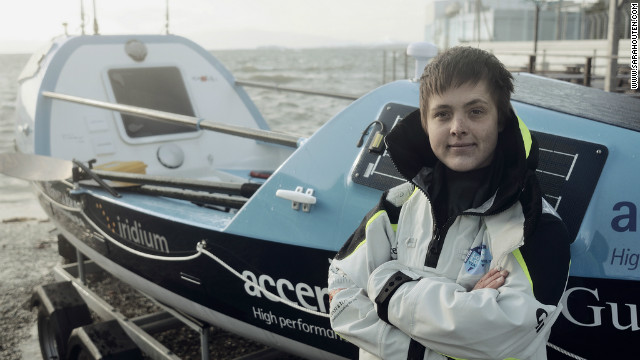 The Pacific crossing is part of a larger voyage that will see Outen circumnavigate the globe without the use of any mechanical engines. 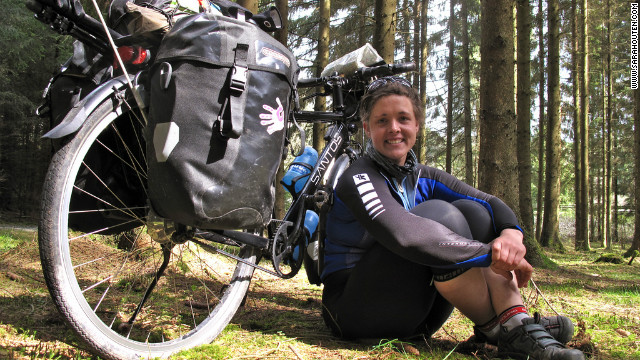 She has travelled 11,000 miles so far, traversing Europe and Asia by bike and canoe. 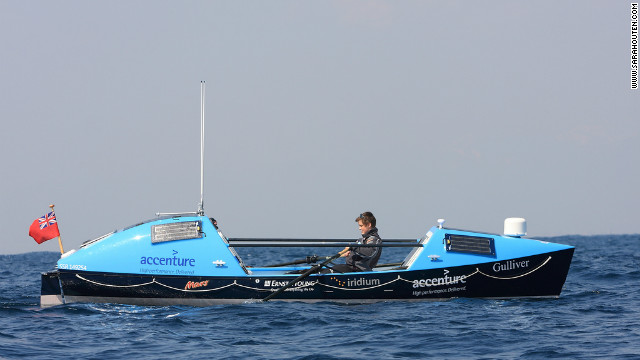 If all goes to plan, the Pacific crossing will take roughly six months to complete. 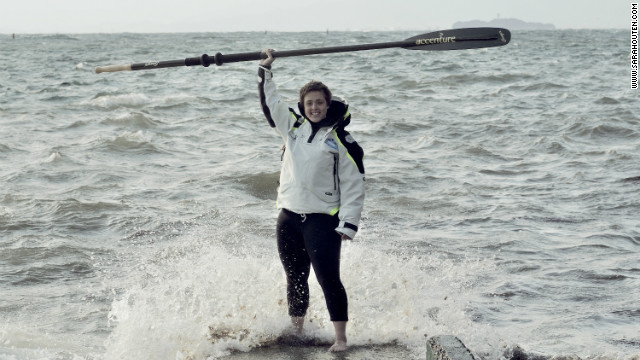 Outen has prepared extensively for the physical and psychological challenges that face her, including boat capsizes and extreme weather.
HIDE CAPTION
Pacific rower
Traveling companion
London to London
On the road
Life at sea
Best preparations
<<
<

(CNN) -- The Japanese coast guard has rescued a British woman on a solo round-the-world trip whose boat was damaged when it rolled several times during a tropical storm, her team said Friday.

Sarah Outen was rescued by the coast guard in rough seas Friday afternoon, the London2London team wrote on its website.

"Sarah is now making her way to back to Japan," the team wrote. "We are awaiting final confirmation of details of Sarah's arrival in Japan and will let you know more once we have further information."

A nearby merchant vessel and a coast guard plane kept watch on Outen until the rescue ship arrived.

Sarah Outen: Around the world on two boats and a bike

A small amount of water had gotten into the cabin of Outen's boat, Gulliver, but she was "bearing up well and demonstrating the strength and resolve that has brought her the huge distance on the journey so far," the team said before her rescue.

She asked for pancakes, cold orange juice and grapes for her first meal after arriving in Japan.

Charlie Martell departed Japan last month on a quest to row 6,000 miles across the Pacific, his website says.

Outen managed to send updates on Twitter while waiting for rescue, writing, "Trying hard2 smile and breathe calm keep getting interuptd by waves throwing us over." (sic)

CABIN SOAKED.WRAPPED IN UNION JACK IN PLACE OF SOGGY SLEDPING BAG.HOLDING ON FOR 2MW. 20HRS LEFT.

"Focusing on calm trying2 block out wind and waves. Visualizing family and friends pulling us in." 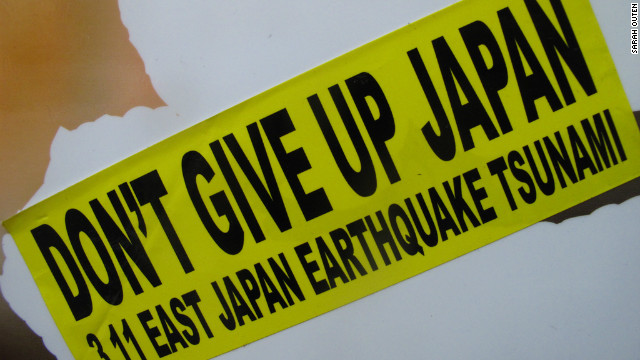 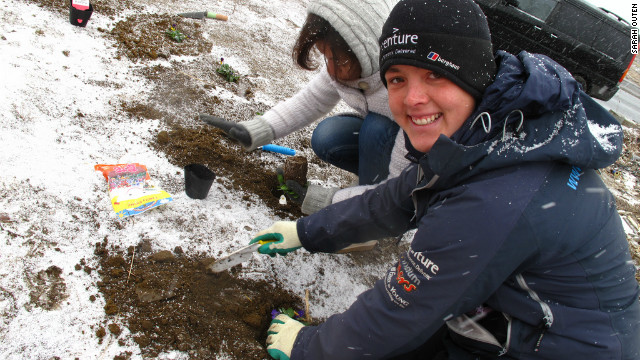 One of the first tasks British adventurer Sarah Outen did was to help plant a memorial garden on the plot where a house once stood. 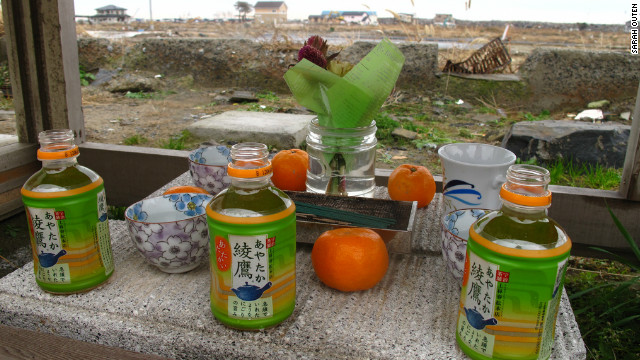 In Japan, people use this kind of breeze block altar with offerings to the dead 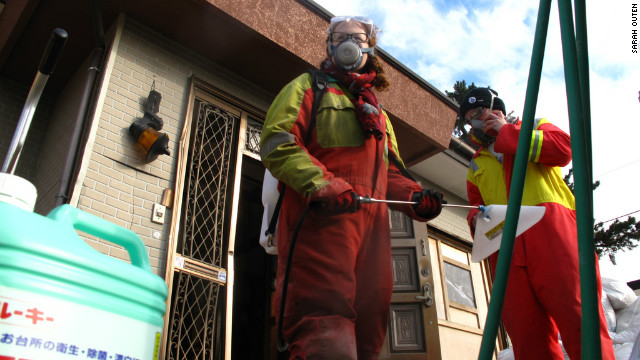 Two volunteers preparing to go in and bleach and scrub the wooden frames of a house. 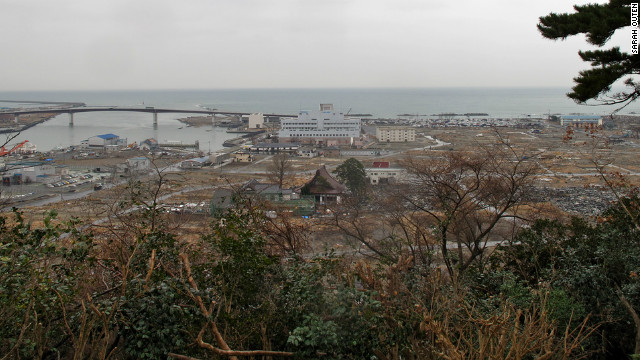 Outen began her solo circumnavigation April 1, 2011, in London with plans to cycle, row and kayak more than 20,000 miles. She hopes to finish in London in autumn 2013.

She is halfway to her goal. Her team says she has already cycled and kayaked more than 11,000 miles, going through countries including Germany, Poland, Ukraine, Kazakhstan and China.

Outen is traveling alone, assisted by a London-based team that includes doctors, a weather forecaster and a sports psychotherapist.