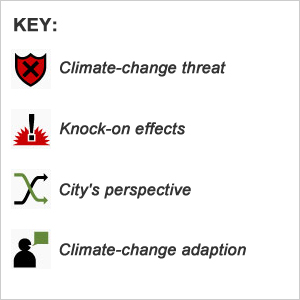 Climate change has the potential to cause unprecedented damage to urban areas -- both in terms of human life and financial capital.

What will cities do to cope with rising sea levels, heatwaves, droughts and more frequent and severe storms? How will they protect their populations and economies?

Cities are, in fact, uniquely placed to answer these questions.

CNN has teamed up with The C40 Cities Climate Leadership Group and the Carbon Disclosure Project to show the risks climate change poses to five major global cities and the steps they are taking to protect them for future generations.

The C40 Cities Climate Leadership Group is the world's preeminent network of large and engaged cites globally committed to reducing greenhouse gas emissions and taking climate actions. Chaired by New York City Mayor Michael Bloomberg, member cities across the globe, from Addis Ababa to Warsaw and Tokyo to Toronto, are measuring risk from climate change and implementing sustainable activities locally that are helping to tackle the issue globally.

CNN has used self-reported data from cities reporting through CDP in 2012. All data is available to the public at www.cdproject.net, or in summary form in Measurement for Management: CDP Cities 2012 Global Report, Including a Special Report on C40 Cities. CNN has been assisted by CDP and C40 staff, as well as C40 member cities in the making of this interactive.