To save a schoolhouse -- and history 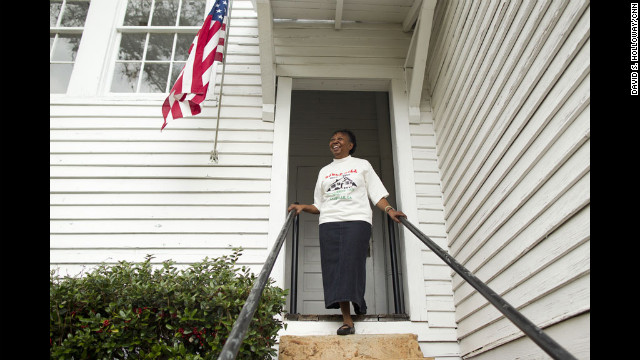 Marian Coleman, curator at the Noble Hill-Wheeler Memorial Center in Cassville, Georgia, stands at the entrance of the former schoolhouse. It was a Rosenwald School, one of more than 5,000 built in the rural South to educate black children before schools were integrated. Money to build the schools came from Julius Rosenwald, the leader of Sears, Roebuck and Co., and matching funds from the community. Coleman was a student at the school before in closed in 1955. 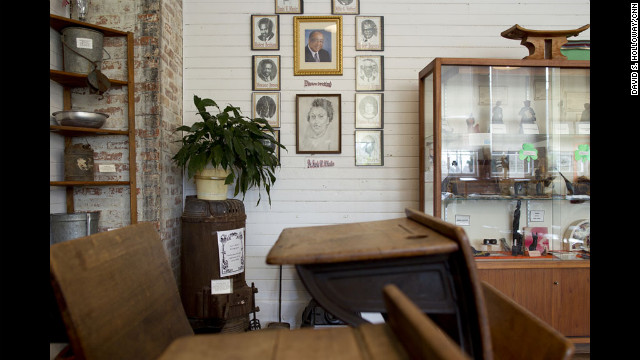 The old Noble Hill school is now a museum of African-American culture. School groups, alumni and their families are still frequent visitors. But many Rosenwald schools were forgotten, demolished or fell into disrepair. 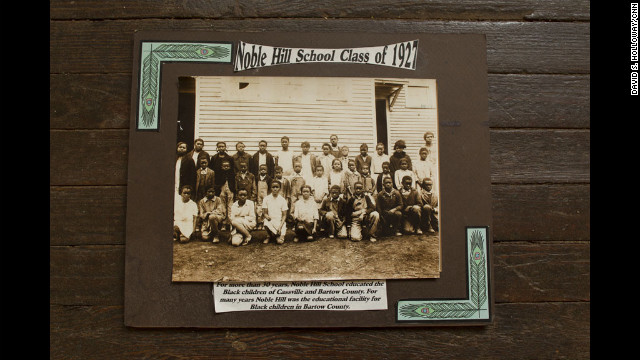 The Rosenwald school in Cassville, Georgia, was the first formal schoolhouse for African-Americans in the area. Before it was built, students were educated at home or church schools, if at all. The school opened in 1924, and closed in 1955. 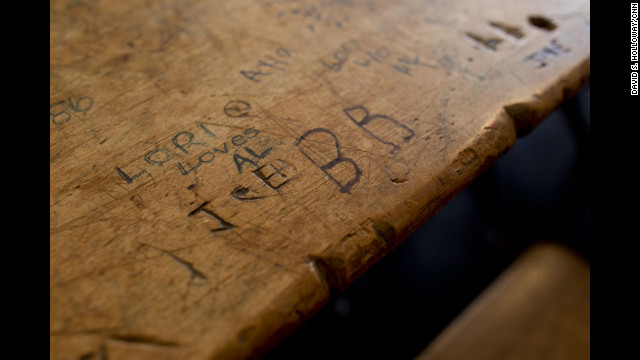 Booker T. Washington, an educator and former slave, worked closely with Rosenwald to secure money for and launch rural schools throughout the South. "You need a schoolhouse," Washington told students at Tuskegee Institute, author Stephanie Deutsch wrote in a new book about the Rosenwald schools. "You cannot teach school in log cabins without doors, windows, lights, floor or apparatus. You need a schoolhouse, and, if you are earnest, the people will help you." 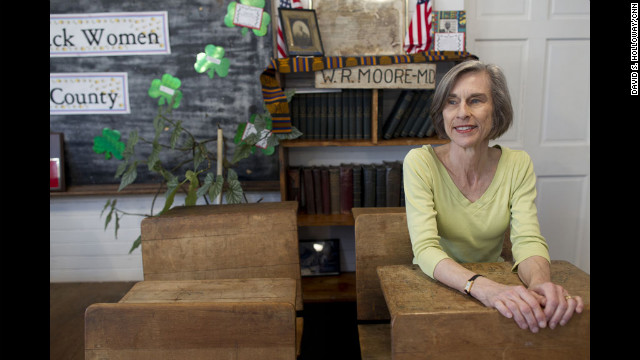 Author Stephanie Deutsch is married to a descendent of Julius Rosenwald, and recently published a book about the Rosenwald, Booker T. Washington and the schools they created: "You Need A Schoolhouse." She visited the Noble Hill-Wheeler Memorial Center in March 2012. 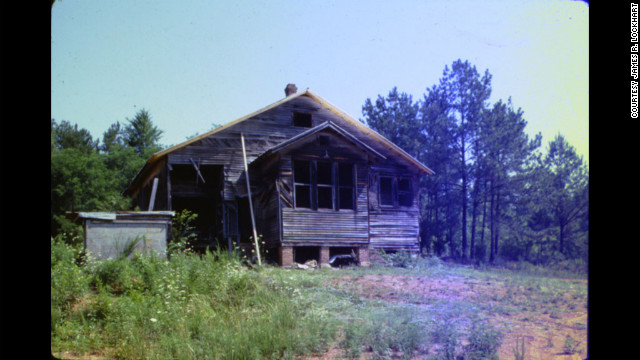 Noble Hill alumna Susie Wheeler was among the first to suggest preserving the old schoolhouse in 1982. The alumni and community members raised more than $200,000 to rehabilitate the school, which had been used for storage since it closed decades earlier. 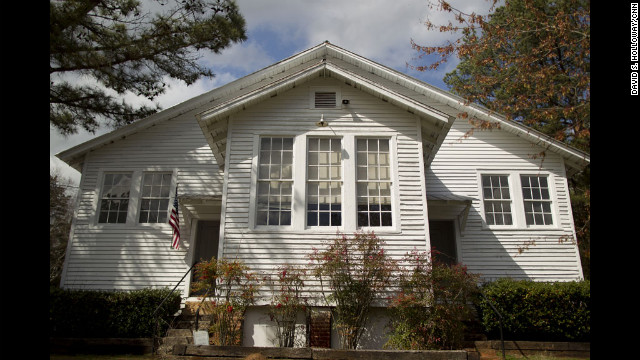 The school was added to the National Register of Historic Places in 1987, and opened as a museum in 1989. It's a classic Rosenwald School design, author Stephanie Deutsch said: Painted white with two classrooms, wood floors and big windows to let in light for children to read by. 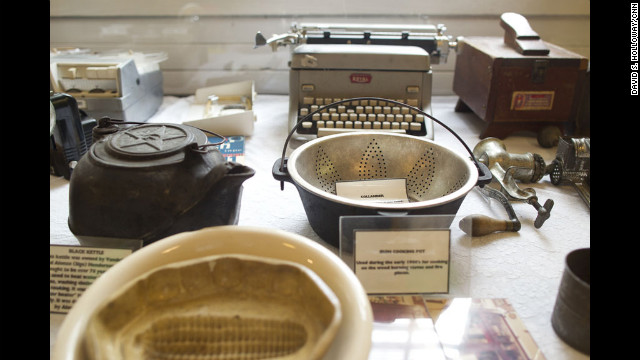 Coleman, the Noble Hill-Wheeler Memorial Center curator, said they collect objects from community members that represent the lives of African-Americans in northwestern Georgia. 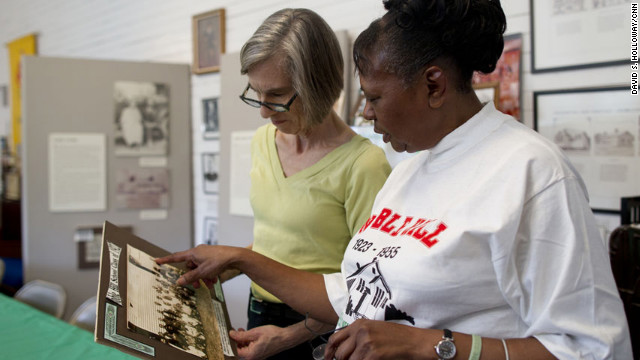 Cassville, Georgia (CNN) -- The little white building with tall windows is off a main road, miles from the busier patches of town. This was the school where Marian Coleman sang nursery rhymes, the same school where her parents met when they were just kids.

For about 30 years, any black child in this northwest Georgia community came here to learn to read and write, to understand math, geography and health. They shared books, brought their own lunches and shared those, too.

At recess, kids played in the woods just outside. In the morning, those who arrived first lit the stove with wood parents donated.

But the Noble Hill School shut down in 1955 -- after four teachers and seven grades had been crammed into the two-room schoolhouse that lacked electricity and water and the Supreme Court had ruled against segregated education for white and black students. It was more than 10 years before the local public schools integrated, Coleman remembers, but there was no pretending the 1923 building was equal.

For decades, the little white building sat empty. It became a storage garage and then a memory. Grass and weeds grew tall around it. The paint chipped away and wood sagged. Windows disappeared.

So it went for most Rosenwald schools, a collection of about 5,000 schoolhouses built between the early 1910s and early 1930s. Their creation stemmed from philanthropy and community cooperation that were rare for the time -- matching funds provided by Sears, Roebuck and Co. leader Julius Rosenwald, educational direction by Tuskegee Institute leader Booker T. Washington and financial support from local black families and white-led school districts.

Their purpose: Educate black children in the rural South.

They were modern schoolhouses for the time, designed by Tuskegee Institute architects with ventilation, gathering space and windows large enough for reading light.

With seed money from Rosenwald, the rural school building program led to significant educational gains for rural Southern blacks, Federal Reserve of Chicago researchers wrote last year, with great effects on cognitive test scores, literacy and years of schooling. As the black-white education gap narrowed between the World Wars, educated African-Americans were more likely to move to areas with stronger labor markets -- mostly cities in the North -- which helped to shape the Great Migration and the 20th century economy.

When the school building program ended in 1932, it had served more 660,000 students in 15 states, according to the National Trust for Historic Preservation.

"People were so hungry for schools," said Stephanie Deutsch, author of a book about Rosenwald Schools, "You Need a Schoolhouse." "There were so many places in the rural South where there just weren't any schools."

It has been 10 years since the National Trust listed Rosenwald schools among the most endangered historic places. Since then, the National Trust launched the Rosenwald Schools Initiative to help school groups share resources and channel millions in grant money. The Smithsonian Institution's National Museum of African-American History and Culture has been acquiring Rosenwald school artifacts. The broader history of the schools has become better known, leading more alumni and communities to question whether their rickety old buildings are part of a bigger story.

There's renewed energy in the fight to restore the old structures, preservationist said. Their current status, as far as the National Trust is concerned: Favorable.

That doesn't mean it'll be easy.

National Trust for Historic Preservation officials estimate about 800 Rosenwald schools still stand. But just like when they were built, their survival requires broader community support.

First, they need help finding them.

The schools were built to serve rural students and often went without addresses, or even roads. Local government and school records are sparse, if they exist at all, preservation workers said. Even those still standing are sometimes so worn by weather and time that they aren't recognizable; it's tough to prove a wooden structure in an overgrown field matches a decades-old memory and the Rosenwald Fund's school records.

The Noble Hill school was among the first Rosenwald schools to be preserved. Its alumni and their descendents began talks to restore the school in 1982, decades before the story of the schools spread. It took years to secure the land and building, gather support from local and state officials, prove historic significance and raise $200,000 needed for improvements.

"A lot of people would have given up," said Coleman, the one-time student.

Coleman is now curator of the museum inside the schoolhouse. It re-opened in 1989 as the Noble Hill-Wheeler Memorial Center, a museum of black culture that hosts hundreds of school children every year.

"It's part of our history, so we can look back and see where we came from, how far we've progressed," said Coleman, who never attended integrated schools and eventually went to Atlanta to further her education. "I tell a lot of the kids they're blessed. Some things that happened in history time, you wouldn't want repeated."

Since Noble Hill's restoration, Georgia preservation officials have located 50 more Rosenwald schools -- a sliver of the 242 built there, but more than many other states have found, said Jeanne Cyriaque, African-American programs coordinator for the Georgia Department of Natural Resources Historic Preservation Division. Cyriaque has sent people tromping through fields to check out rumors of buildings, she said, but the search had changed in recent years. As the story of the Rosenwald schools spread, she began to hear from alumni who'd just realized their schools had a history beyond their small towns.

"People would call in and say, 'I think I have a Rosenwald School. Can you help me?'" Cyriaque said.

The struggles they face now can be even greater than Noble Hill's -- buildings are older and deeper into disrepair. Restoration money is hard to come by. Even the most well-meaning alumni are rarely prepared to babysit a historic building.

African-American history only sparked the interest of historians in recent decades, preservationists say, and many communities are now trying to make up for lost time.

"It has to do with the understanding -- the mainstream America understanding -- that our histories are all interwoven. You can't separate the strands and shouldn't separate the strands of our collective history," said Tracy Hayes, field officer with the National Trust's Rosenwald Schools Initiative. "Everyone can have their own individual experience, but it's not individual at all; it's all part of the larger tapestry.

Some communities aren't interested in the saving the Rosenwald schools or the memories they represent. For a long time, black and white communities struggled with emotions dug up by the old buildings.

"We're trying to get communities to recognize these are not just African-American stories. It's their community's history," Cyriaque said. "In the African-American community, if a building was associated with slavery or Jim Crow, it was somewhat devalued."

It's no coincidence, she said, that Atlanta's Sweet Auburn district, once known as "the richest Negro street in the world," appeared on the National Trust's list of most endangered places released last week, she said.

But the memories of the safe, loving community around the Rosenwald schools is exactly what drives some local preservation groups.

"It took a while for me to understand that affection, that it was a loss," said Deutsch, the author, who is married to a descendent of Julius Rosenwald. "'Everything in this little town was segregated. We couldn't go to the library or do anything. This was everything. There's solidarity in being together, facing something difficult together." 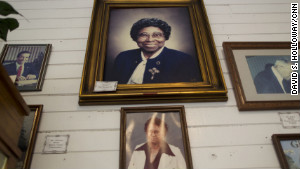 Community members who worked to save the Noble Hill school are memorialized inside the museum.

This weekend, preservationists, historians, alumni and builders gather in Tuskegee, Alabama, for the National Rosenwald Schools Conference. It's their chance to share what they've learned and consider how other rural communities manage their Rosenwald schools. For some, it's a crash course in preservation: How to pay for it? What's the maintenance like on an 80-year-old building?

Most importantly, preservationists said: What can the building do to sustain its own survival?

"A lot of people, when they first get into it, think the hardest part is saving the building. Really, it isn't in the end. It's how you're going to keep it alive."

Many museums struggle to stay open, staffed and funded. Some school buildings are successfully used now as preschools or private residences. The 1929 Carroll School in Rock Hill, South Carolina, is used by fifth-graders doing field studies about life during the Depression. The former Walnut Cove Colored School in Stokes County, North Carolina, is used as a senior center. The six-classroom Highland Park School in Prince George's County, Maryland, opened in 1928, and is now part of a larger elementary school.

Most of the usable buildings in Georgia serve as community centers, although some have served as town offices, libraries and studios for dance classes, Cyriaque said.

At the Noble Hill Wheeler Memorial Center in northwest Georgia, Coleman has heard it all. Kids are shocked by the idea of outhouses and three-mile walks to school, but older folks come there to reminisce. Even if they grew up somewhere else, older visitors recognize the wood floors, the blackboards, the high block of windows and wonder what happened to their old school.

"When they come in and we start talking, and it starts bringing back a lot of memories, I get a lot of information that way," Coleman said.

"Sometimes, it just takes something to stir it up."

Do you or any of your family members have a memory connected to these schools? Share with us in the comments below.