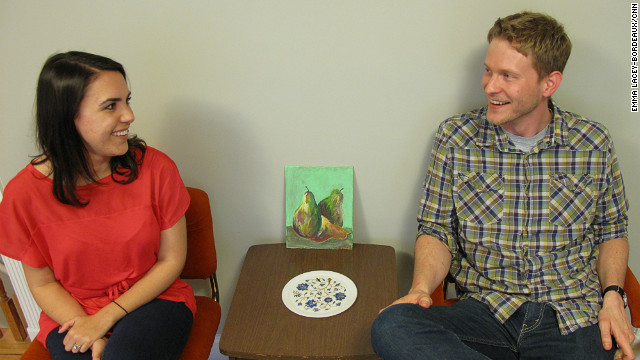 He's the musician who three years ago turned his misfortune into an Internet sensation. His video, "United Breaks Guitars," got a million views in just four days and prompted the airline to offer him compensation. But despite struggling with the airline for months, Carroll turned down the money because he wanted something bigger: he wanted to reform the system.

Carroll is not the first angry customer to take his complaints online.

Rants abound on video sharing sites; many feature nothing more than the offended party on a webcam spinning a tale of woe. That's what made Carroll's video stand out. The Canadian crooner spent seven months putting together a song and video. His real time and real talent combined to make something that people could really enjoy.

"If you are ranting or raving, people will listen for a second, but they won't want to join your cause," Carroll explains. After months of struggling with United, that's what Carroll had -- a cause.

HLN's Clark Howard has a cause, too. He covers all things consumer-related and to Carroll's advice, he suggests adding another element: "Something that makes people laugh and makes them angry at the same time."

One Atlanta couple, Ken and Meredith Williams, recently learned first hand how this mix of outrage and humor can get the public on your side and sway a large corporation.

Their story starts about six months ago when the newlyweds found themselves in a rather intractable situation trying to buy their first home. "We knew that the people we were dealing with weren't hateful people," Meredith recalls, but along their 78-day odyssey they couldn't help but wonder.

After meeting in graduate school, the couple got married and moved to Atlanta. Then came time to buy their first home.

The two had good jobs, steady income and they wanted to buy a modest home within their financial reach. "We put in an offer on September 8th. We wanted to close -- we were told we would close," Ken recalls. But when "we came up to October 7th, and nothing was appearing to be falling place."

Sitting around their dining room table, Ken and Meredith rattle off all the missed deadlines and infuriating delays that tangled up their lives for weeks on end. They say paperwork wouldn't make it to the correct office, phone calls and e-mails would go unreturned.

One of their bank contacts even quit and failed to pass along their file; "her e-mails just started bouncing" Meredith says, shaking her head at the memory. All the while the couple scrambled to meet the sellers' demands while living out of boxes. "We were ready to unpack," Meredith says.

Early on, when things first started going wrong, they saved e-mails. So after missing the projected closing date, with fees beginning to pile up and only radio silence from the bank, they turned their in-boxes into a weapon.

"I just thought we just have to do something -- there is some kind of power we can leverage" Meredith says. So while she hit the keyboard to share the story on their blog, Ken picked up his guitar. Two hours later, he emerged, "He was like, 'I wrote a song,' " Meredith giggles.

What started with a song became a custom video featuring the couple and their cats, pleading with Bank of America to the tune of "Bret, You Got it Going On" from the HBO show "Flight of the Conchords."

"The goal was never to get thousands of people to tweet," Meredith says. That's a good thing because the video didn't exactly go viral (nothing close to Carroll's million views), but it did get a good deal of attention.

Local news outlets picked up the couple's story and within 48 hours, the bank got in touch. They now had the ear of top people at the bank. With that, their hopeless situation, weeks of unreturned phone calls and volumes of paperwork came to a close. "We wrote the song on day 72 and posted it on day 74 and we closed on day 79," Ken says.

Their prize, a charming brick bungalow on a quiet street, is small and neat. As the couple walk through, they sound like many new homeowners pointing out all the projects.

"There must have been a fire sale on molding" says Meredith, gesturing toward the oak-filled kitchen. Some big things needed work too. The couple put in new wiring, duct work and plumbing. These projects aren't flashy or exciting, but the pair shows them off with pride. That construction, in part, explains what held up their loan, says Terry Francisco, a Bank of America spokesman.

The Williamses applied for a 203(k) loan, which allows for renovations. Francisco says this type of loan can actually take some 90 days to close. Realtors and mortgage brokers confirmed that 203(k) loans typically take much longer to close than a standard loan. Francisco did apologize for other hang-ups in the Williams' case, and he said the couple's experience prompted "a tightening of procedures" at the bank.

His efforts not only got him offers of compensation but even now, three years on, he travels around the world bringing his mix of music and message to places such as Russia, Australia and soon South Africa. He also published a book about his experience and launched a website, Gripevine.com, that helps people elevate and escalate their problems.

Looking back, both the Williamses and Carroll say the intent behind the video is as important to getting noticed as the message.

"I'm not against companies, I'm not trying to take down companies," Carroll says. Rather, they agree, it's about giving companies and the people who work for them the opportunity to make things right. But even if a viral video doesn't get you want you want, all three say the process affords a measure of control -- something they'd lost in what Carroll calls the "customer service maze" and Meredith called the "black hole of customer service."

So it's no surprise that all three say they would make another video if they found themselves in a similar situation.

For others contemplating going this route, Carroll says "make sure that you are fair and you are articulate and you are creative and that your story resonates with other people." It also doesn't hurt to be good with a guitar.