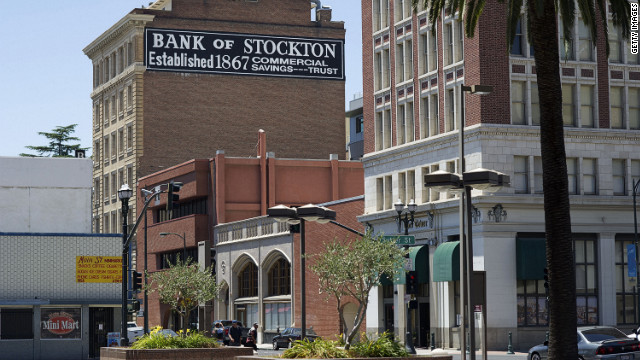 (CNN) -- The California city of Stockton approved a special budget Tuesday night, paving the way for it to become the largest American city to declare bankruptcy.

"Unfortunately, we have no comprehensive set of agreements with our creditors to offer you ... that would eliminate the $26 million budget deficit and avoid insolvency," City Manager Bob Deis said at a council meeting.

Negotiations, however, continue with some creditors.

"I think we're very close in announcing some possible deals with some creditors in the future," he said. "In fact, it could be as many as a third of the creditors ... that's not enough to balance the budget."

From the archives: Rhode Island city files for bankruptcy

The city council approved the pendency plan on a 6-1 vote, meaning Stockton will file for protection under Chapter 9 federal bankruptcy laws before Sunday when the new fiscal year begins.

The plan is essentially a new budget for the city of about 291,000, spelling out day-to-day operations under bankruptcy.

The city, which is about 80 miles east of San Francisco and about 50 miles south of Sacremento, says it will continue to pay employees, vendors and service providers, but curtail most other expenditures, such as debt service.

Numerous governments across the country have filed for bankruptcy since the financial crisis of 2008.

The largest previous municipal bankruptcy case was filed in 1994 by Orange County, California, which owed approximately $1.7 billion to creditors.

From the archives: Plan released to keep Harrisburg, Pennsylvania, from bankruptcy filing

Since 2009, Stockton has cut $90 million from its budget, she said. The city has reduced its police force by 25%, its fire department by 30% and other city jobs by 40% but has not been able to get itself financially stable. And then, said Johnston, there was the housing bust.

"The housing was the straw that broke the camel's back," said Johnston. "We had this bubble in our economy here. We were booming in construction. We were building about 3,000 homes a year. It began to fall off sharply three and a half years ago," she said. "This past year only 105 single-family construction permits were issued."

Richard Acosta is a 75-year-old retiree in Stockton and said everywhere he looks there are for-sale signs.

"You have two across from my house. There was like four on the other side, and there's about two or three more down on the next block," said Acosta. "I always thought the city of Stockton was really gonna go somewhere. But I don't really see any future in it for five to 10 years before something really is going to happen here," he said.