When Italian immigrants were 'the other' 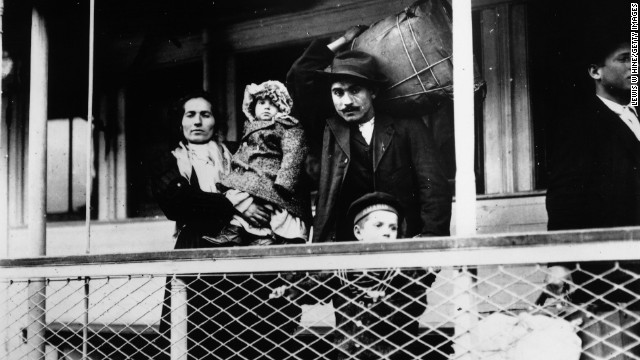 An Italian immigrant family on board a ferry from the docks to Ellis Island, New York.
STORY HIGHLIGHTS

Editor's note: Ed Falco is the author of the novel, "The Family Corleone," a prequel to Mario Puzo's "The Godfather." Among his awards and honors are an NEA fiction fellowship and the Southern Review's Robert Penn Warren Prize. He is a professor of English at Virginia Tech, where he directs the MFA Program in Creative Writing.

(CNN) -- In Murfreesboro, Tennessee, where there is opposition to the building of a mosque, protesters are reported to have gathered at the construction site shouting, "Islam is not a religion!" When I read this in my local paper, I thought about how the people of Murfreesboro's Islamic community must have felt at the sight of their neighbors rallying against them and their religion.

America has a proud tradition as an immigrant nation, but it also has a long history of marginalizing those it marks as "other." America's other heritage includes suspicion, hostility, abuse and even death, leveled against ethnic groups as they arrived one after another in waves over the past 2½ centuries.

I learned much about this as I researched "The Family Corleone," a novel I wrote based on a screenplay by Mario Puzo. The novel is about, among other things, Italian-Americans living in New York during the depression.

There were a number of things that surprised me in my initial research. I knew something about our nation's early antipathy toward Catholics and Italians, but I had not fully appreciated the depth of that antagonism. For example, the largest mass lynching in U.S. history took place in New Orleans in 1891 — and it wasn't African-Americans who were lynched, as many of us might assume. It was Italian-Americans.

After nine Italians were tried and found not guilty of murdering New Orleans Police Chief David Hennessy, a mob dragged them from the jail, along with two other Italians being held on unrelated charges, and lynched them all. The lynchings were followed by mass arrests of Italian immigrants throughout New Orleans, and waves of attacks against Italians nationwide.

What was the reaction of our country's leaders to the lynchings? Teddy Roosevelt, not yet president, famously said they were "a rather good thing." The response in The New York Times was worse. A March 16, 1891, editorial referred to the victims of the lynchings as "... sneaking and cowardly Sicilians, the descendants of bandits and assassins." An editorial the next day argued that: "Lynch law was the only course open to the people of New Orleans. ..."

John Parker, who helped organize the lynch mob, later went on to be governor of Louisiana. In 1911, he said of Italians that they were "just a little worse than the Negro, being if anything filthier in [their] habits, lawless, and treacherous."

In addition to prejudice based on ethnicity, Italian immigrants also had to face an older hostility toward their religion. In earlier centuries, Catholics in America were in a position similar to today's Muslims. In 1785, when Catholics proposed building St. Peter's Church in the heart of Manhattan, city officials, fearing the papacy and sinister foreign influences, forced them to relocate outside the city limits. In this incident, it's easy to hear echoes of the Murfreesboro protests, as well as the ongoing protests against an Islamic center proposed for 51 Park Place in contemporary Manhattan.

On December 24, 1806, two decades after St. Peter's was built on Church Street, where it still stands, protesters surrounded the church, outraged by mysterious ceremonies going on inside, ceremonies we now commonly understand to be the celebration of Christmas. The Christmas Eve 1806 protest led to a riot in which dozens were injured and a policeman was killed.

The decades go by, they turn into centuries, and we forget. We've forgotten the depth of prejudice and outright hatred faced by Italian immigrants in America. We've forgotten the degree to which we once feared and distrusted Catholics. If we remembered, I wonder how much it might change the way we think about today's immigrant populations, or our attitudes toward Muslims?

The question of prejudice toward Italians and Catholics was ancillary to my writing project, something I wanted to better understand in order to fully imagine my characters. Nonetheless, the research left me with even greater respect for generations of Italian Catholic immigrants who struggled to make their way in a world so initially hostile to them and to their religion; and by extrapolation, for all immigrants and members of minority faiths everywhere, in every historical period, including our own, who face similar struggles.

The opinions expressed in this commentary are solely those of Ed Falco.