Richard Branson: Galactic spaceship to blast off in 2013 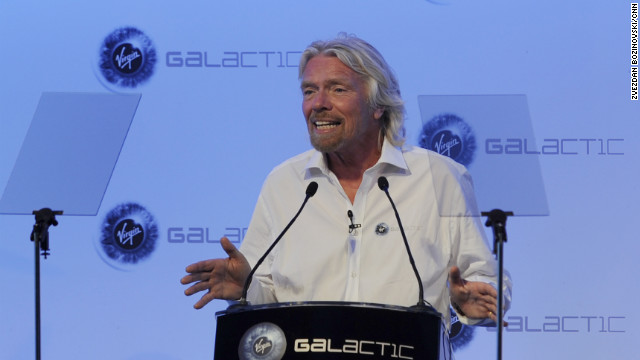 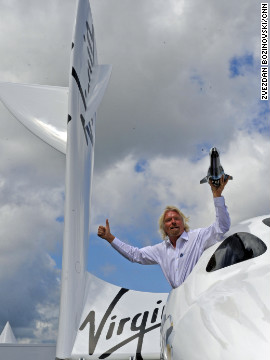 Richard Branson hangs out of the window of SpaceShipTwo, currently on display for the first time in Europe at the Farnborough Airshow, with a model of LauncherOne. According to Branson, the maiden voyage for LauncherOne is expected to be 2015. 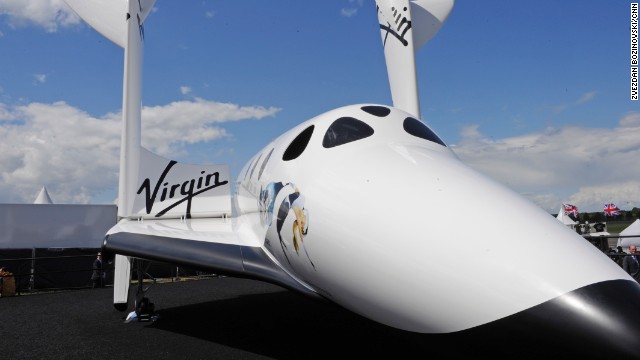 Virgin Galactic's SpaceShipTwo is featured in a static display at Farnborough this week. The aircraft is making its European debut with a few modifications. 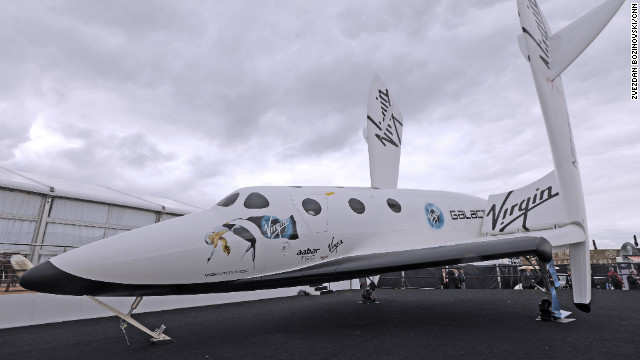 Virgin Group founder Sir Richard Branson announced on Wednesday that the first space tourists will take off in 2013. 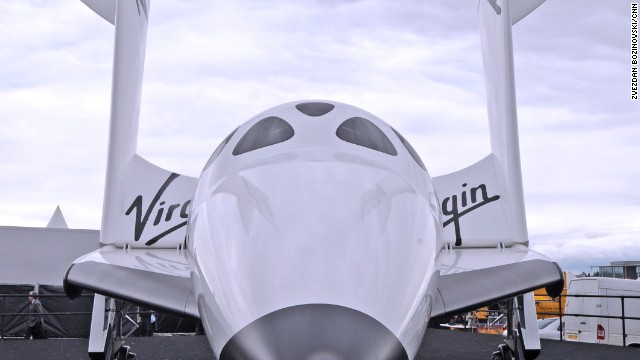 According to Virgin Galactic's chief executive and president, George Whitesides, 529 aspiring astronauts -- among them celebrities such as Ashton Kutcher -- have now paid a deposit on the $200,000 ticket. 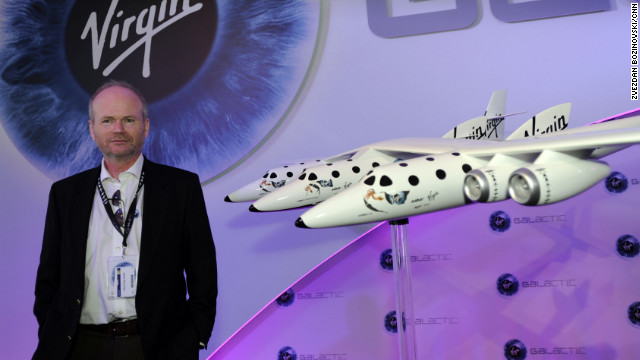 Virgin Galactic test pilot David Mackay was also present at the announcement at Farnborough on Wednesday. 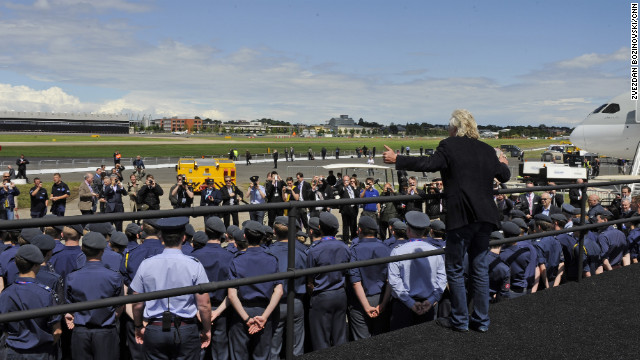 Follow CNN's coverage of the Farnborough Airshow through the week.

Farnborough, England (CNN) -- Virgin chief Richard Branson has put a time frame on his plan to launch tourists into space, claiming he and his family will blaze a trail for hundreds of fare-paying passengers by blasting off in December 2013.

Branson also announced that Virgin Galactic, his fledgling commercial space company, was expanding to include a satellite-launching service that would use a low-cost rocket system to propel payloads into orbit.

Speaking at the UK's Farnborough International Airshow, the British entrepreneur said his adult children, Holly and Sam, would accompany him on board the SpaceShipTwo on its pioneering two-hour voyage into sub-orbital space.

"It'll certainly be the most momentous moment of my life and my children's lives," Branson told CNN. "It'll be very difficult to ever cap it I think. Anyone who has ever been into space says the same thing."

Virgin Boss Richard Branson announces on Wednesday that SpaceShipTwo will blast off with its first space tourists in 2013. 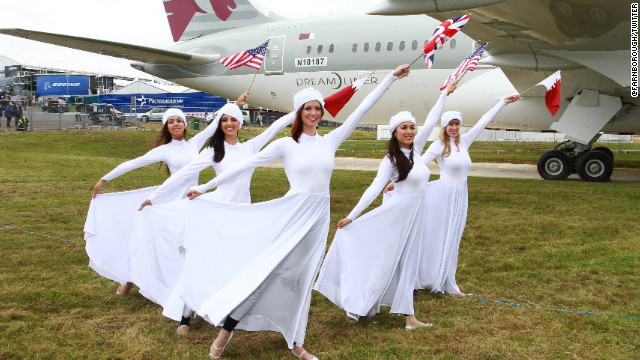 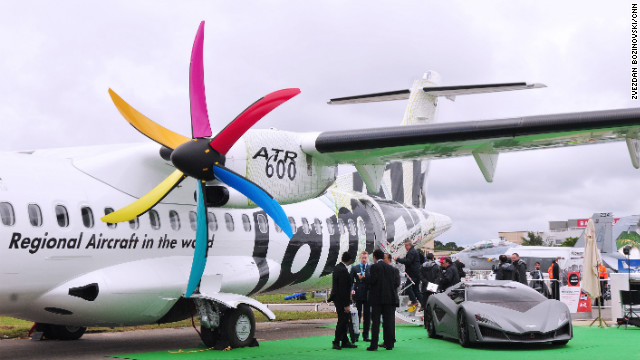 ATR, the world's leading manufacturer of regional aircraft below 90 seats, displays their updated version of the ATR 72-600. Proving to be a success at this year's show, the manufacturer has announced 23 firm orders from customers. 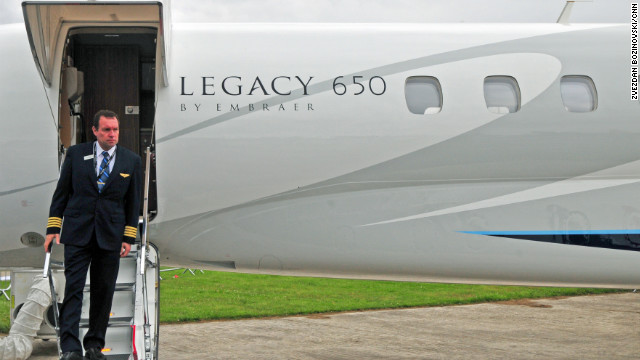 Embraer showcase their private jets including the 2012 edition of the Legacy 650 which is making its debut at Farnborough. The Legacy 650 is a large three-cabin jet with a transatlantic range of 3,950 miles and primarily aimed at the executive aviation market. 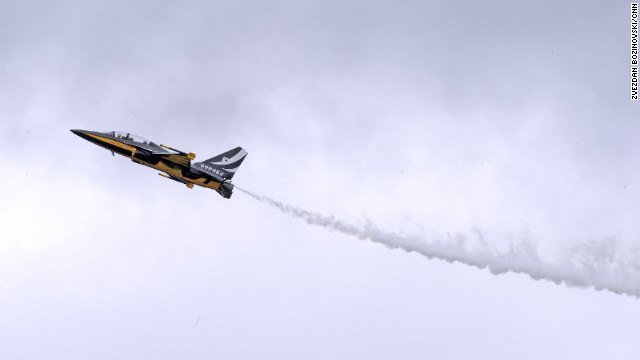 The Black Eagles (modified T-50Bs), formally known as the Republic of Korea Air Force Aerobatic Team, show off their skills at Farnborough this week. They are the only Asian-developed aircraft present at the aviation event. 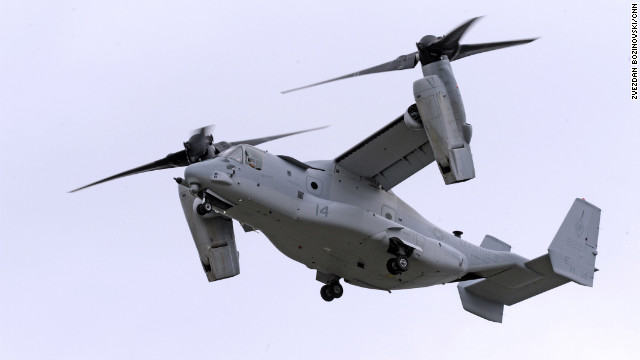 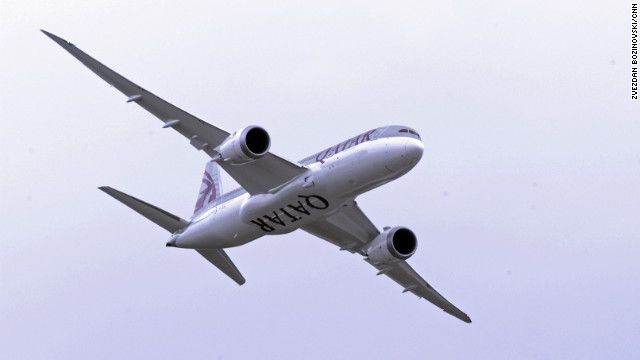 Boeing returns to the Farnborough Airshow after a 28-year aerial absence as it presents the 787 Dreamliner in Qatar colors. 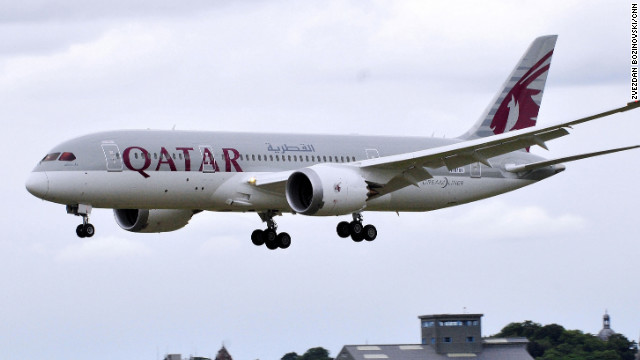 The 787 Dreamliner in Qatar colors comes in for a landing after a rare seven-minute display.

Virgin Galactic's SpaceShipTwo is featured in a static display at Farnborough this week. The aircraft is making its European debut with a few modifications. 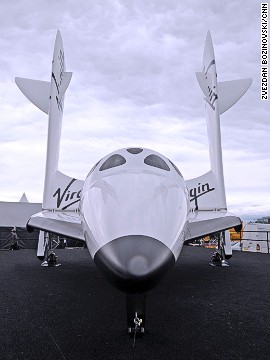 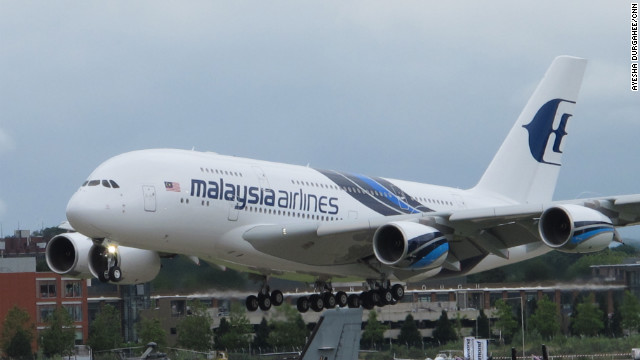 The Airbus 380 in Malaysia Airlines colors lands after a spectacular aerial performance of sweeping maneuvers at the Farnborough Airshow on Monday. 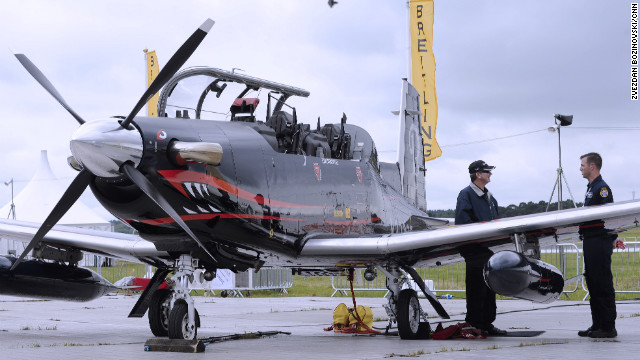 Breitling is at the airshow in Farnborough this week with aerobatic display troupes -- the Breitling Jet Team and the Breitling Wingwalkers -- who will conduct flying displays over the heads of crowds below. 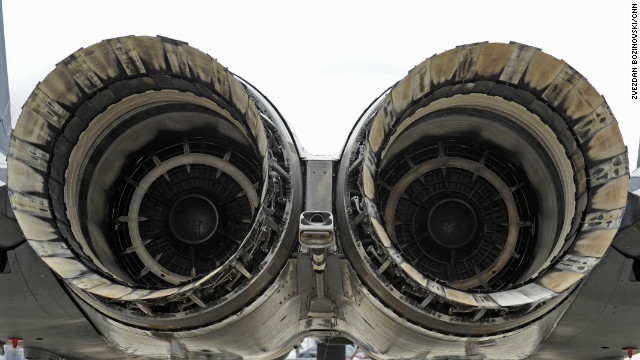 Multi-million dollar military contracts are already being announced from Farnborough despite it only being the first day. On display, both as in a static and flying display, the Eurofighter Typhoon wowed the crowds. 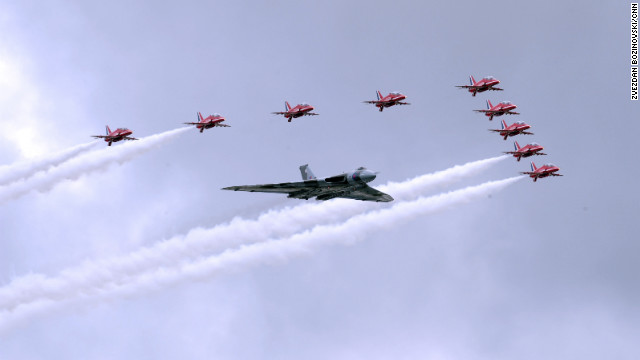 Some 529 would-be astronauts, including celebrities such as Ashton Kutcher, have so far signed up for $200,000-a-seat flights which will last two hours.

Virgin executives said the figure was a milestone as it exceeds the existing number of space veterans. Six hundred are expected to fly in the first two years of service.

Launched from a carrier vessel known as WhiteKnightTwo, Virgin Galactic's space ship can carry two pilots and six passengers. SpaceShipTwo is currently undergoing testing in the Mojave Desert in California, although a replica was on display at Farnborough.

Branson acknowledged the existing price tag means that his goal of opening space travel up to ordinary people was some way off. He insisted, however, that it would drop over the next few decades as Virgin's space ambitions went further.

"The initial flights will be sub-orbital, which will give people a taste of space," he said. "From there we'll go into orbital flights and maybe one day hotels in space."

Outlining details of his new satellite service, LauncherOne, Branson said the two-stage rocket would also be carried into launching position by WhiteKnightTwo.

He said the service, capable of launching 500-pound payloads, would drastically reduce the cost of putting satellites into orbit. This, he said would open up the market to researchers, small businesses and even schools.

Virgin Galactic's commercial director Stephen Attenborough told CNN that the goal was to be able to offer a reliable satellite launch system for $10 million, a price tag he says undercuts existing services by up to 50%.

George Whitesides, the company's chief executive and president, said: "This will radically revolutionize the small satellite business in the way we have the space tourism business."

But Branson insisted his chief aim was to open space to researchers studying the "global crisis" of climate change.

"In America you've got a lot of skeptics about global warming, what you need is the scientific evidence that it is there one way or the other," he said.

"The majority of scientists believe we have a problem, we need to know that conclusively and we need to work towards resolving it and I think LauncherOne will make it clear one way or the other, and sadly I think it'll be the other."

On the sidelines of Wednesday's announcement, Virgin Galactic officials offered more details of what customers can expect for their money.

Whitesides said astronauts on board SpaceShipTwo would experience a little less than five minutes of weightlessness, during which time they will be free to unclip their seat harnesses and float within the cabin.

"Some people will want to focus their time looking out of the vehicle, looking down at the planet or Milky Way, whereas others may want to do spins or tricks," Whitesides told CNN.

"The initial flights will be sub-orbital, which will give people a taste of space... Maybe one day hotels in space."
Richard Branson

"There's one guy who wants to assume a neutral position, close his eyes and get back to the womb.

"My big concern is getting people back to their seats. This is one of the central design considerations. My guess is it will be as simple as saying 'OK everybody; get back in your seats. Then gravity will kick in."

Branson, meanwhile, confessed he hadn't yet planned his time in space. "I'm sure we will do something but we haven't got that far thinking about it. If we're allowed to put up a flag up there... who knows?"

Quiz: Are you a plane geek? Test your aviation knowledge

Adam Wells, Virgin Galactic's head of design, said the cabin's interior was being kept as minimal as possible to reduce weight and maximize space for floating. There are unlikely to be comforts familiar to airline passengers. Television screens will probably be too heavy -- and there will be no toilet.

"The intent is to keep the volume as uncluttered as possible," he told CNN. "From an ideal standpoint we want everything, including the seats to disappear, which is a fascinating design challenge."

Some people will want to focus their time looking out of the vehicle, looking down at the planet or Milky Way, whereas others may want to do spins or tricks.
George Whitesides

Araujo, 62, described his journey into space as a "spiritual journey" during which he would pay homage to his late father, a poet and composer also called Angelo Araujo.

"As we age and we approach the end, we are part of the universe and I think it's wonderful to see it from another angle.

"I want to read some poetry from my father. He will be the first Portuguese poet to be read in space.

Perry Sporn, a jeweler from Burlington, Vermont, who will be among the first 500 to fly said the $200,000 price tag was money well spent.

"I was a poor kid but I had an amazing opportunity to be productive and make a good living, so to me it's a ridiculously small sum."

As Virgin Galactic's chief pilot, David Mackay is likely to helm the first flights and may even break records for space travel as he clocks up at least one voyage per week when the service is up and running.

"I'm not on some ego trip to enjoy the greatest number of space flights," he told CNN. "If it's successful, it will eventually become much more common and whatever record I set will quickly be broken."