Are you a window flier or aisle seater? 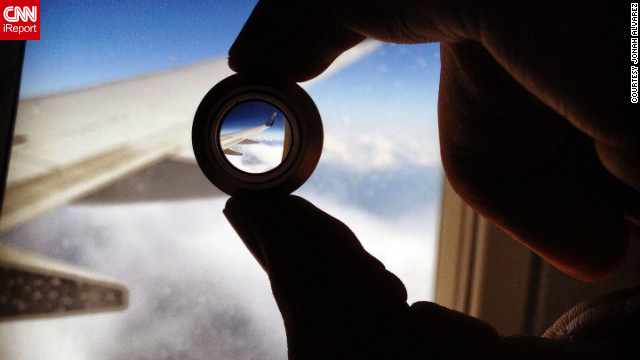 iReporter Jonah Alvarez of Calgary, Alberta, took this shot on a trip to celebrate his high school graduation. He held his tiny iPhone-compatible wide-angle lens and focused on it "so that the image within the lens is in focus but all else is not." 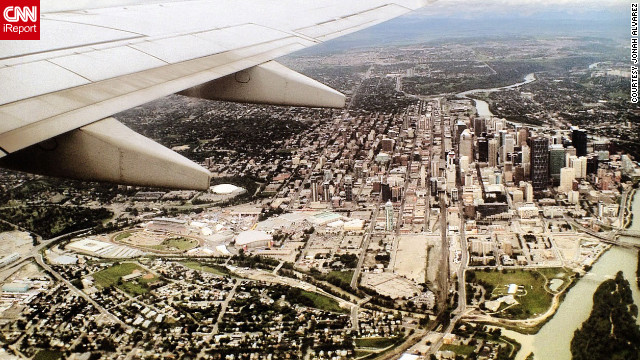 Alvarez took this shot in Calgary on his way to see New York for the first time. 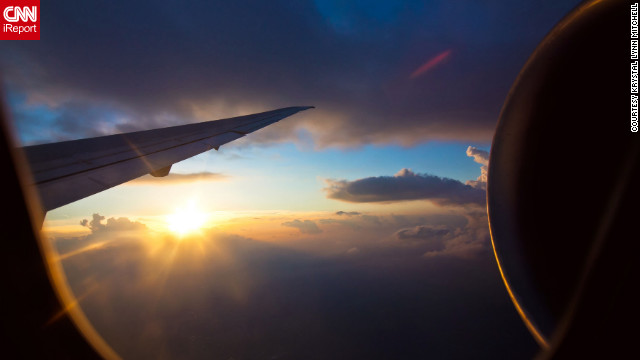 "Holy Sunset! I usually pass on these types of shots as they all look the same. This was too gorgeous to pass up! What makes it different is the wide angle, which shows what's on both sides just out the window," writes iReporter Krystal Lynn Mitchell, who took this photo on a flight from Lexington, Kentucky, to Fort Lauderdale, Florida. 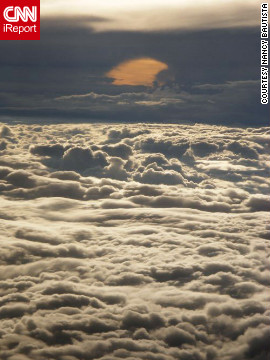 Nancy Bautista took this serene photo during a flight from Fort Lauderdale, Florida, to California. "Looking out of a window during a flight influences my mood most definitely. It just relaxes me." 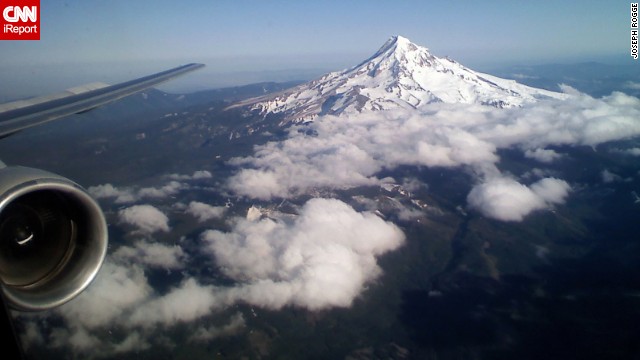 Joseph Rogge got this great shot of Mount Hood on a flight into Portland, Oregon. "There is much beauty in the world, sometimes you see it from unexpected perspectives." 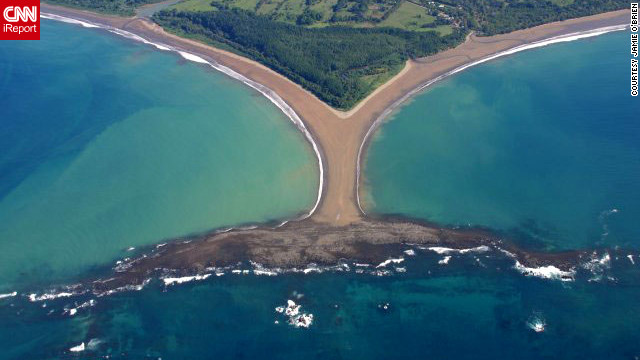 The "Whale Tail" is a natural formation on the Pacific Coast of Costa Rica. "After the earthquake/tsunami that devastated Japan, effects were felt all the way to this town of Uvita," writes iReporter Jamie O'Brien. It disappeared underwater for days before it re-emerged. (Hide the caption for a better view.) 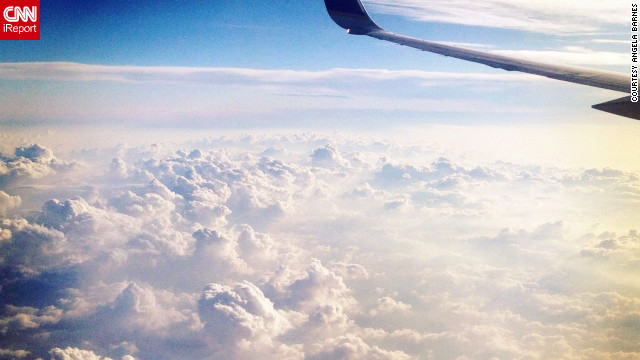 "If there's a heaven I bet it looks a little like this," writes iReporter Angela Barnes, who snapped this photo on a red-eye flight from Los Angeles to Washington. "What a beautiful way to start off my day in this whole other world above the clouds." 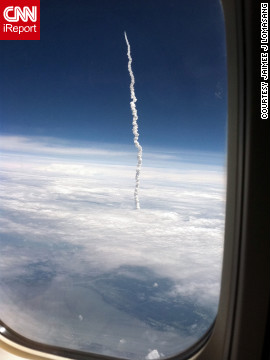 Jaimee J. Lomasang was thousands of feet above Cape Canaveral for the July 2011 launch of the space shuttle Atlantis, the last mission in NASA's 30-year shuttle program. "The scene was magnificent. My husband and I were able to see the shuttle light up from the ground and a few seconds later it was above us." 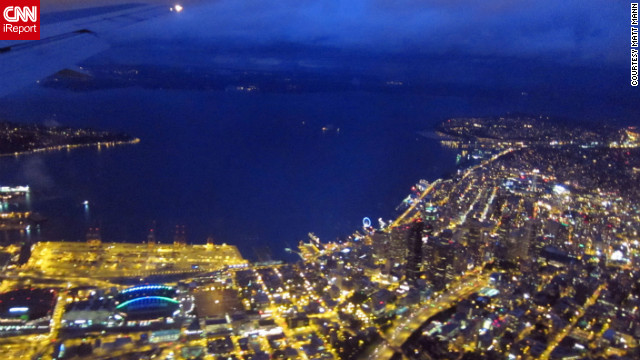 Matt Mann approached Seattle at night on an Atlanta connection from his home in Greenville, South Carolina. 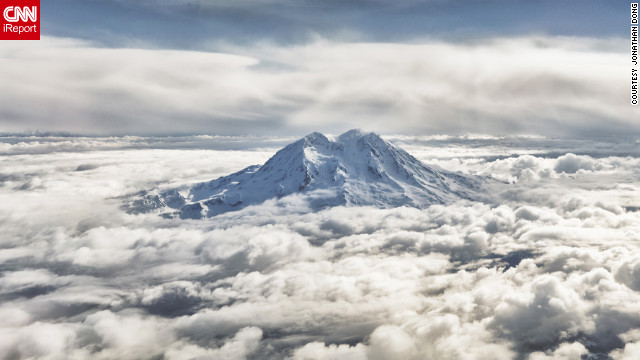 Jonathan Dong, a student and freelance photographer, created a panoramic photo (cropped here) of Washington's Mount Rainier by laying five images horizontally. "It was the only peak in view that was capable of rising up to bathe in the morning sun, shining in the light, but yet completely solitary." 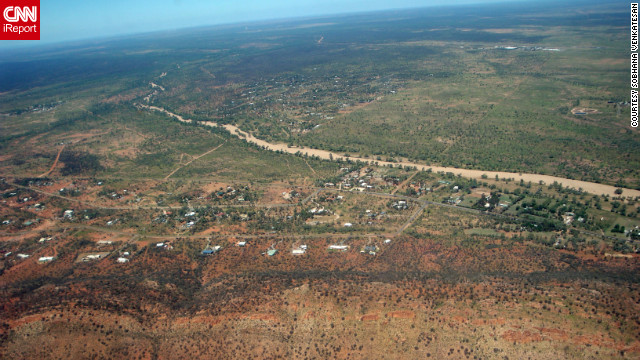 Sobhana Venkatesan took this photo over Alice Springs, Australia. Venkatesan, from St. John's, Newfoundland, "was embarking on an adventure in a faraway continent." 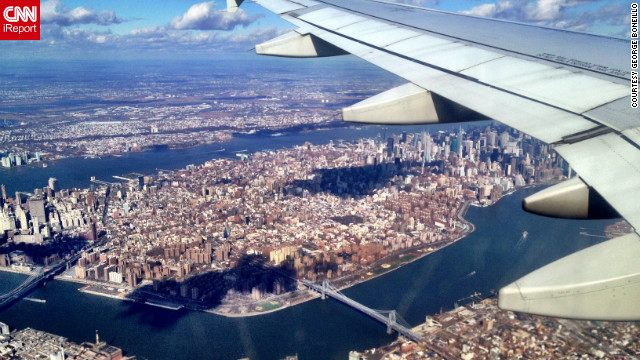 "I love NYC and miss it now that I live in the South," writes George Boneillo, who lives in Myrtle Beach, South Carolina. "It was great seeing my city again from the air." 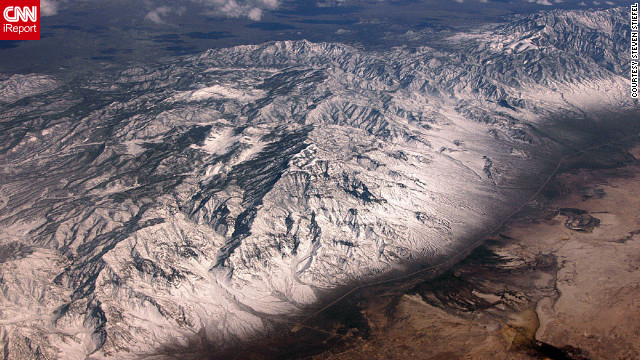 "Is this the Continental Divide? Or just some mountains?" wonders iReporter Steven Stiefel, who captured this contrasting landscape on a flight from California to Atlanta. "You really get a sense of how huge our continent is and how diverse the landscape is from region to region." 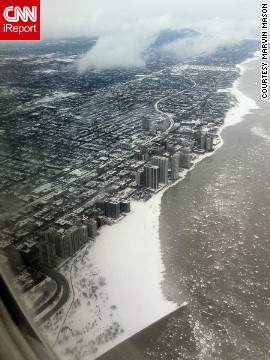 Marvin Mason took this "apocalyptic" shot of Chicago flying over Lake Michigan. "The icy waters added to the drama." 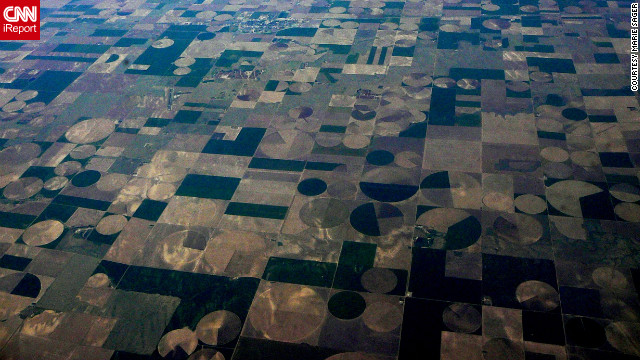 iReporter Marie Sager took this photo on a flight between Los Angeles and Providence, Rhode Island. "I had been cat napping and when I woke up, I thought I was looking at a piece of art." 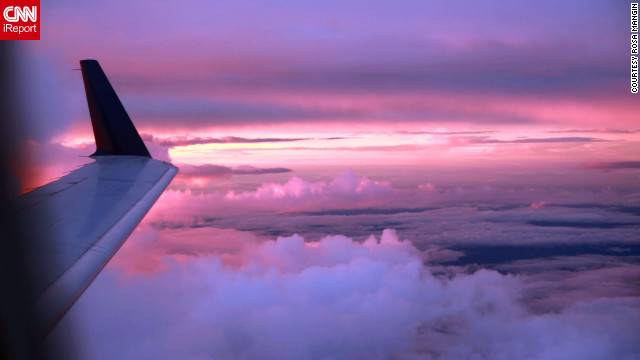 Nervous flier Rosa Mangin took this gorgeous sunset shot during a flight from Memphis, Tennessee, to Tupelo, Mississippi. "Staring at the beauty of the clouds that night, I could not help but think how much of life I would miss out on if I let my fear of flying overcome me."
HIDE CAPTION
Flight in focus
Calgary, Alberta
Skies between Kentucky and Florida
Blanket of clouds
Mount Hood, Oregon
Whale Tail
Heavenly view
Last liftoff
Sparkling Seattle
Mount Rainier, Washington
Land down under
New York
Mountain view
Chicago
Heartland
Southern comfort
<<
<

(CNN) -- It's a powerful thing: the airline window seat.

Kids clamor for them. Shutterbugs are drawn to them. And some of us can't not look out the window.

Statistics suggest that window seat passengers may enjoy their flights more. But changes are afoot for this travel touchstone.

Some of the most desirable window seats come at a premium now. And that may shift how we feel about them. And let's face it, if all the photos snapped from airplane windows are any indication, we LOVE them.

Why all the love? Sure, the stunning 30,000-foot views are cool. But for some travelers, it's deeper than that.

Really? Can you analyze a traveler's personality by their favorite airplane seat? Of course not; don't be ridiculous. But let's do it anyway.

First, let's take a look at the aisle seaters, who are passionate in their own right about airline seating. Screw the view; these folks are all business.

"The aisle person is looking to get some work done," said Courtney Scott, Travelocity's travel blogger.

They want quick access to the cabin door -- or the restroom. And to get that access, they're willing to put up with collisions with passing airline attendants and rattling snack carts.

Luggage delivered to your door for a fee

Aisle seaters sacrifice frequently standing up and sitting down -- and returning their "folding trays to their full upright position" -- to make way for the middle and window seaters.

For window seaters, it's not just about the view (or something to lean on). It's about the experience! These fliers often are the true romantics.

I hope I get a window seat and no-one sees me on the plane crying....

When it comes to heart-wrenching separations, the aisle seat just doesn't pack the same cinematic punch.

It's been a century since the first U.S. commercial airline took to the sky. In that time, the window seat has become for many the best part of flying in an industry where complaints are all too frequent and the novelty of flight has faded. It attracts certain kinds of travelers, but it also can transform them.

Can I get a win-dow seat? Don't want nobody... next to me.
Erykah Badu, "Window Seat"

Stats on airline seats are hard to come by, but anecdotally, front aisle seats are "generally considered most desirable" among Travelocity customers, Scott says.

At Expedia, 21% of customers over the past year picked window seats, 20% chose the aisle, and the rest had no preference. A United Airlines satisfaction survey for Airbus A320 passengers showed slightly higher preference for windows over aisles.

Here's what's changing: Airlines are charging premium prices for some window and aisle seats. And that's forcing passengers to choose the dreaded middle seat. It also makes it more difficult for families to sit in the same row if they're not willing to pay extra.

This is shifting "the way that people view the window seat," Scott said. "It has become even more of a premium."

It's not all blue skies with the window seats. The American College of Chest Physicians issued new health guidelines this year warning that sitting in window seats on long-distance flights can increase some people's risk of developing life-threatening blood clots called deep vein thrombosis.

Combine that with a higher risk of wetting yourself and stepping on strangers' toes, and you can see how far passengers are willing to go for those killer views.

And of course, who better to ask about the best air views than airline pilots?

They tell us that -- generally -- window seaters love flying in and out of New York LaGuardia; Vancouver, British Columbia; Sydney; Hong Kong and San Francisco.

Washington's Reagan National Airport has an eye-popping approach known to pilots as "river visual," says pilot Justin Schlechter. The plane flies low over the Potomac, giving passengers on the left side amazing views of the Kennedy Center, the Lincoln Memorial and the National Mall.

The descent into Anchorage, Alaska, Schlechter says, "is spectacular, with unbelievable mountaintops just skimming below the aircraft." Best seats: right side.

And then there's the constant reminder that you're in a metal tube at 30,000 feet.

In a famous 1963 episode of "The Twilight Zone," William Shatner plays a mentally disturbed flier who watches helplessly through the window while a gremlin tears the plane apart.

"It taps into that universal thought of 'if God intended us to fly, we would have wings,' " the "Star Trek" star told Business Jet Traveler. "A lot of people getting on an airplane to this day still can't figure out why it flies."

Watch a two-minute version of "The Twilight Zone" episode

Dreamliner windows measure 19 inches tall, 65% larger than the industry standard, according to Boeing. The cool factor on these portals is high: a gel inside the glass allows passengers to brighten or darken the outside sunlight with the touch of a button.

Finally, a word of advice from award-winning travel blogger Geraldine DeRuiter of Everywhereist.com: Don't be the "inconsiderate window seat guy."

If sunlight is burning through your window when many passengers are trying to sleep, please shut your shade.

Otherwise, DeRuiter writes, you'll be called out as "heinous and rotten and selfish."

And you don't want that -- no matter how amazing your view is.

So... which airplane seat do you prefer? Why? What does your choice say about your personality? Should airlines charge fees to book preferred window seats? We're interested in your opinions and experiences. Cast your vote in the poll above and share your thoughts in the comment section below.

Dan Condon believes in recycling. Just not when it comes to his hotel towels.
Snacks on a plane: They matter
updated 12:48 PM EDT, Wed June 13, 2012

"If your vacation causes you stress, it's not a vacation, it's a should, a to-do or an overachieving chore," says one prominent life coach.
Is the photo better than the trip?
updated 9:22 AM EDT, Mon July 23, 2012

Brent Larson and his bride look like an ad for their resort, glowing, in love and sun-kissed in paradise. The photo doesn't tell the whole story.
Sometimes, airlines go the extra mile
updated 2:28 PM EDT, Sat June 23, 2012

When five teenagers sat down and posed for a picture at Copco Lake in 1982, they didn't plan on making it a tradition. But that's what it became.
Airline seat squeeze: It's not you
updated 9:35 AM EDT, Fri June 1, 2012

The photos are glamorous, but how glorious were those early days?
Close connections: Love at the airport
updated 10:25 AM EDT, Mon June 11, 2012

Some travelers pick up a lifelong souvenir well worth the stress of the airport before they even reach their final stop.
These people really love to fly
updated 10:39 AM EDT, Sun June 10, 2012

A trip together can strengthen a relationship or spark a dramatic flameout.
How much do we really hate the TSA?
updated 10:06 AM EDT, Sat June 2, 2012

Despite grumbling over pat-downs and removing shoes, official complaints against the TSA are down.
Air rage: Passengers 'quicker to snap'
updated 12:15 PM EDT, Fri June 1, 2012

At look at the evolution of that special frustration known as 'air rage.'