Vermin Supreme: The protester who would be president 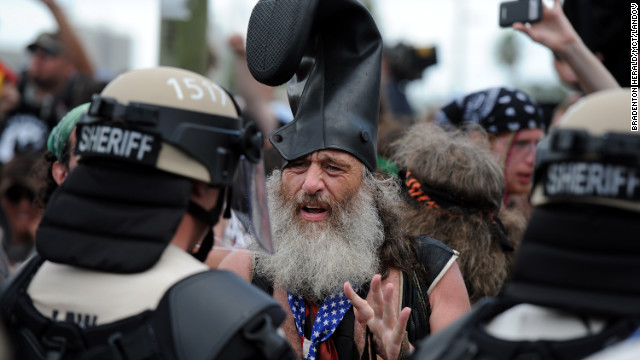 Tampa, Florida (CNN) -- Vermin Supreme -- yes, that's his real name -- was in his element at the "free speech zone" way, way, wa-a-a-a-y outside the sports arena hosting the Republican National Convention. He stood with a bullhorn in that tense gap between the front lines of police and two sets of protesters.

The cops were tricked out in their riot "turtle suits," and one group of protesters, led by a red-and-black anarchist flag, was intent on disrupting the planned demonstration of another, the anti-gay Westboro Baptist Church.

The gray-bearded hippie standing between them wore a boot on his head.

"Between the cops and the protesters, there's a vacuum. That's the space I occupy," Vermin Supreme explained afterward. "It looked a little scary. It looked like it might get tense."

The self-described "friendly fascist," who is a perennial presidential candidate and veteran of countless protests, recited passages from police manuals on crowd control tactics. Using the bullhorn, he urged calm: "Nobody needs to get hurt here." A man next to him started to warble "Over the Rainbow," and Vermin Supreme felt soothed. He held the bullhorn close to the singer, letting the melody wash over the crowd of about 150.

The tension melted away. It was, he said, "a beautiful moment."

It also was as close as the 2012 Republican National Convention came to seeing the street violence and mass arrests that marked past political conventions. More than 1,800 people were cuffed outside the 2004 convention in New York, an all-time high. The number dropped to 800 four years later in St. Paul, Minnesota, and just 150 people were arrested that year at the Democratic National Convention in Denver.

In Tampa, there were just two arrests -- and only one during a protest march. Property damage was minimal. 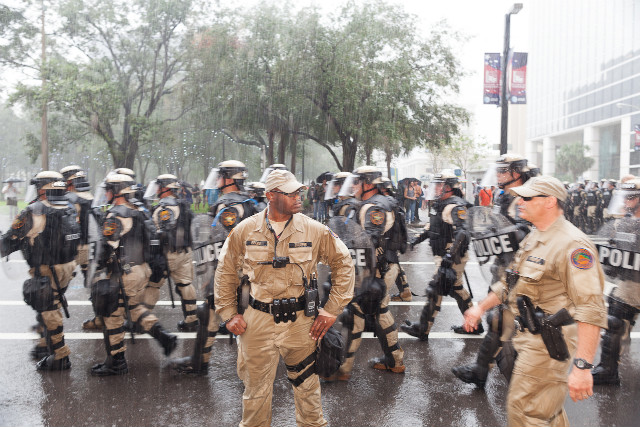 Police march by during the Republican convention on Thursday, August 30.
Zoran Milich for CNN

Officials prepared for the worst, erecting fences around public buildings. Elsewhere, concrete barricades stopped cars and people alike. The jail on Orient Road was cleared out to streamline the booking of hundreds of expected protesters but the mayhem was limited: A man allegedly walked down the street with a machete strapped to his leg. A 19-year-old allegedly failed to remove a bandana over his face during a march down Kennedy Boulevard.

City officials said they expected as many as 10,000 protesters, including hardcore black bloc anarchists. They estimated 5,000 demonstrators would show up for the kickoff march. They got 500, tops.

As another city -- Charlotte -- steels itself for mass demonstrations at this week's Democratic convention, the question has to be asked: Where were the protesters?

That question was posed Wednesday on ResistRNC.org's website, but by the next day the rhetoric was more upbeat. "We are winning," the group crowed, noting that Tampa spent $50 million on a "made-up bogeyman."

But really, where have all the protesters gone?

Vermin Supreme has a few theories. "The weather here kept the numbers down," he said. "A lot of people didn't want to come down to Florida. Who wants to come to Tampa in August? It's too hot, and it's too far south."

As the convention got under way, Isaac was swirling in the Gulf of Mexico, and Tampa had been transformed into what protesters complained was "a police state."

While the storm may have been a deterrent, a Tufts University professor who studies protests in presidential campaigns says the unprecedented security buildup also was a huge factor. The Department of Homeland Security declared the convention a special national security event, which freed federal funding for extra police and state-of-the-art gear.

"This RNC has been so over-militarized, even attendees were complaining about the level of security," said sociology professor Sarah Sobieraj. "They were ready with everything -- unscalable fences, bomb-sniffing dogs, even long-range acoustic devices, which are nasty."

The unmistakable message to the protesters: Don't mess with Tampa.

"It is clear that these extreme measures were not intended to prevent a terrorist attack, they were for protesters," Sobieraj added. "There has been a shift toward a criminalization of dissent that is a real problem." 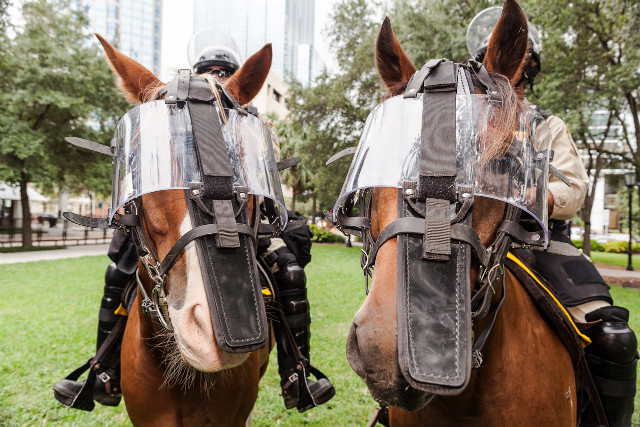 Police sit on horses on Thursday, August 30, in Tampa.
Zoran Milich for CNN

Indeed, there were cops everywhere: cops on bicycles, cops on horses, cops on golf carts, cops on mini-Jeeps, cops on street corners, cops on rooftops, even cops on boats. The city, with federal funding, spent $50 million to beef up security.

Mayor Bob Buckhorn estimates 4,000 law enforcement officers from 60 agencies -- including state troopers, patrol cops from departments across Florida, FBI and U.S. Secret Service agents, and the National Guard -- were in Tampa to help keep the peace. The officers dressed in military-style khaki fatigues, and some of them wore shorts. They were relentlessly cheerful and helpful, giving the streets a Copapalooza vibe.

In the middle of all that was Vermin Supreme, who also is running as a write-in candidate.His protest playlist includes the "Mr. Ed" theme song for mounted police officers, Steppenwolf's "Born to be Wild" for motorcycle cops and Queen's "Bicycle Race" for the police on bikes. He looks like Dumbledore from the Harry Potter books and movies and seems a throwback to the Merry Pranksters and the hippies, yippies and freaks who disrupted the 1968 Democratic National Convention. His clownish attire is reminiscent of the San Francisco Bay Area's Wavy Gravy, who is 76 and, as he puts it on his website, "fast approaching geezerhood."

People have suggested that Vermin Supreme debate Wavy Gravy, whose given name is, coincidentally, Hugh Romney.

Vermin Supreme may have been the most visible neo-freak at the convention, but he wasn't the only one.

On the first night, "A.J.," a Ron Paul supporter in a tie-dyed T-shirt and long dreadlocks twisted in a knot, invited delegate after delegate to give him "a high five for the Constitution."

So, instead of torn-up streets, broken windows, overturned cars, hurled epithets and worse, Tampa got a taste of street theater. There wasn't a whiff of tear gas.

The protests that did take place were peaceful and widely scattered. Wednesday's lineup was typical: Planned Parenthood held a rally in a park across the river from the convention center. One speaker pranced around in a costume that looked like a packet of birth control pills, but the dancing pink vaginas already had headed home to San Francisco. The AFL-CIO held a march without incident. A man who calls himself The Grand Rebbe hung for 12 hours from a cross in a park more than a mile from the convention center, but only a handful of people passed by.

Vermin Supreme, meanwhile, popped up everywhere. He began his protest week with an open letter to Tampa police, offering tips on how to keep the peace during "this hot and sweaty National Security Rodeo." He advised police to make liberal use of cornstarch to avoid chafing, which he said would make them grouchy and more inclined to use force.

"The place where any two parts of the human body rub up against each other can cause painful irritation," he wrote. "The same is true of the body politic." The best way to avoid chafing, he added, was "wearing no pants."

It might sound ludicrous, but Vermin Supreme insists there's a method to the madness. He uses humor to defuse tense situations, and parody to make political points. 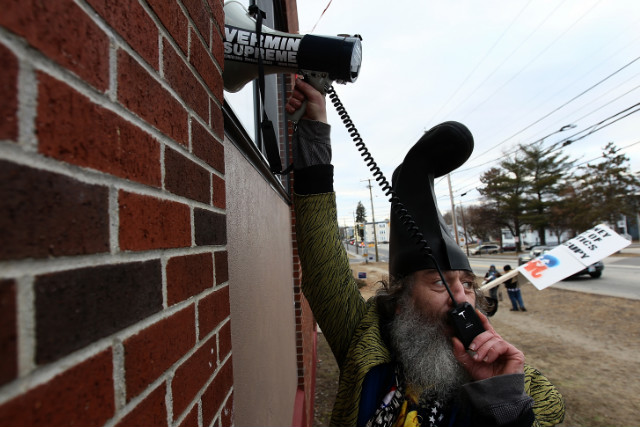 Vermin Supreme places a megaphone against a restaurant where Newt Gingrich is.
Getty Images/File

Besides attending protests, Vermin Supreme has been campaigning since the late 1980s. At first, the offices he sought were pure fiction, such as "Emperor for the New Millennium." But eventually he set his sights on real offices, including mayor of Baltimore and president of the United States. He inevitably loses, but considers the fact anyone votes for him at all to be "a moral victory."

He didn't want his given name published; in fact Vermin Loving Supreme is the name on is driver's license. "My wife knows me as Vermin," he said. "My mother knows me as Vermin. For all intent and purposes, that's my name."

He was working as a promoter at punk nightclubs years ago in Baltimore when he adopted the name as part of his shtick. Other promoters and club owners were vermin, he said, so he declared himself the Vermin Supreme.

Asked his age, he responds cryptically. "I tell the media I'm 62."

On this steaming tropical evening, he wore a black vest and white T-shirt over a pair of black shorts. Sometimes he dons a clown nose. Several neckties hung around his neck, each a variation of the American flag. They peeked through a beard that reaches his chest, and his gray locks are pulled up into a ponytail.

Speaking of ponies, Vermin Supreme says he's affiliated with The Pony Party. If by some miracle he wins the presidency, he promises that every American will get a pony. Other planks in the Vermin Supreme platform include mandatory tooth brushing for all (because of Americans' advanced state of "moral and oral decay"); preparation for a zombie apocalypse; and, last but not least, full funding for time travel research.

Vermin Supreme vows to go back in time "and kill baby Hitler with my bare hands."

Although it seems he's playing a huge joke on the political system, it has given him some legitimacy.

He has gotten on the presidential primary ballot in New Hampshire at least twice. In 2004, he made it onto the ballot in the District of Columbia, prompting the Washington Post to sniff that he was a candidate "about whom we have heard and know nothing."

This time around, Vermin Supreme has the meme. He received some Internet attention during the primary by taunting Newt Gingrich and Ron Paul in New Hampshire, and sprinkling gold glitter on Randall Terry during a December 2011 campaign event for lesser-known candidates.

The glitter-bombing made him an Internet sensation. (Go ahead, Google it; you know you want to.)

But is Vermin Supreme for real?

"I am 100% a candidate. I am running," he insisted as we chatted in Ybor City at the end of a long day of protesting. He explained that the campaign is his way of expressing his absurdist take on the political process.

He performed Wednesday night at Café Hey, a hub for protesters just a brick's throw from their Tampa campsite, dubbed Romneytown. He played it for laughs, joking in a prepared stump speech that "a vote for me is a vote completely thrown away."

Sort of. "I would love to see everybody get a pony, don't get me wrong," he said.

As the Republican convention drew to a close with arrests at a record low, all eyes turned to Charlotte, North Carolina, and the Democratic National Convention.

Once again, officials in a growing city eager for attention are steeling themselves against thousands of anarchists and protesters. Maybe they'll show up this time. Maybe they won't.

One thing is certain: Vermin Love Supreme will be there, his tongue in his cheek and a boot on his head.