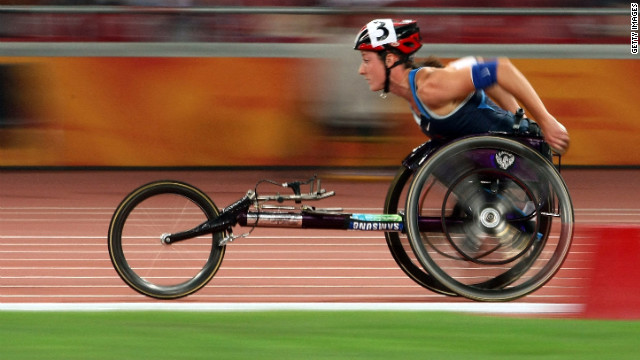 Tatyana McFadden is an eight-time world champion sprint athlete from the United States. She has previously participated in Paralympic Games in Athens and Beijing. So far in London, she has added a gold to her medal stash. 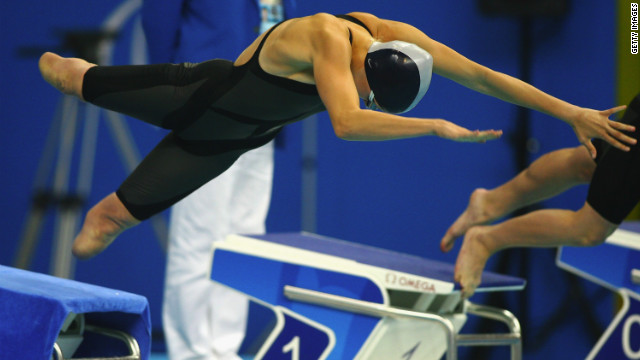 Before the London Paralympics, Jessica Long told usaswimming.com she wanted to have fun while competing this year. This relaxed attitude has worked well for Long who has won three gold medals since arriving in London, which she is adding to her nine previous Paralympics medals. 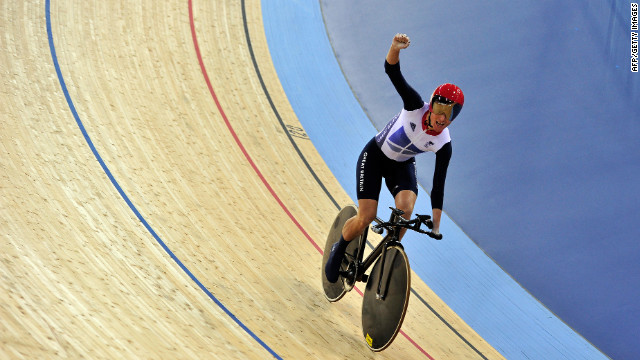 Sarah Storey was a big name for ParalympicsGB before the Games started. She cemeted her name in the Paralympic record books by winning the first gold medal for the host nation and setting a new world record -- all on day one. 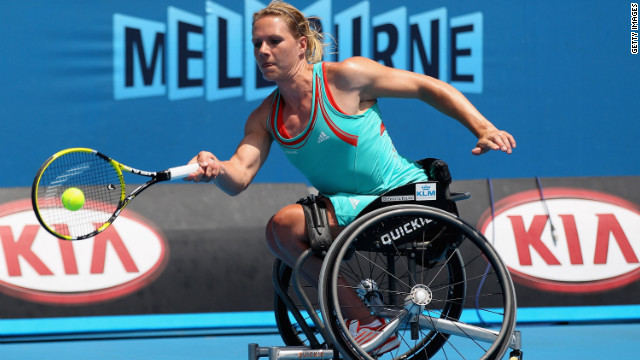 Not only is Esther Vergeer the female world number one in wheelchair tennis, but she also holds the remarkable record of 465 unbeaten singles matches over almost a decade. 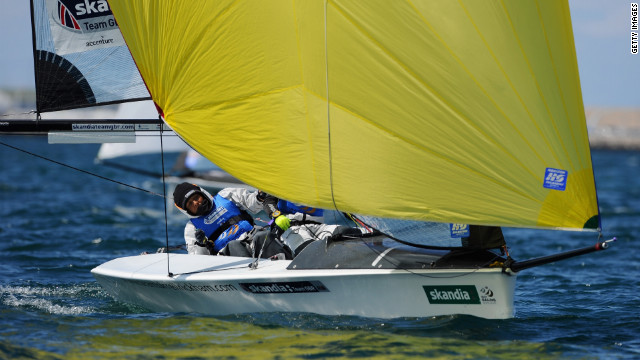 Alexandra Rickham and Niki Birrell of Great Britain got together as a sailing team in 2007 and have gone on to win four consecutive world titles. However, a paralympic medal has so far alluded them. 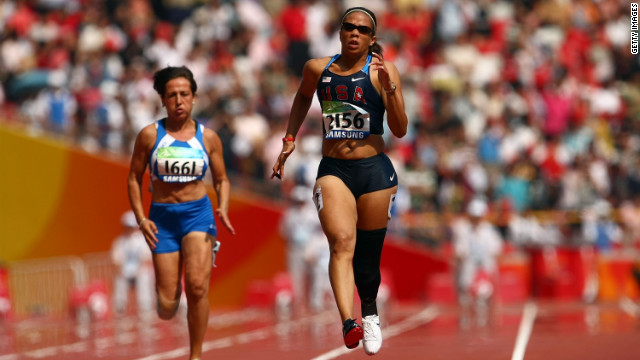 U.S. athlete April Holmes competes in the women's 100m T44 event on day eight of the 2008 Paralympic Games. She beat her own world record, fulfilling an ambition she'd spoken about before the games. 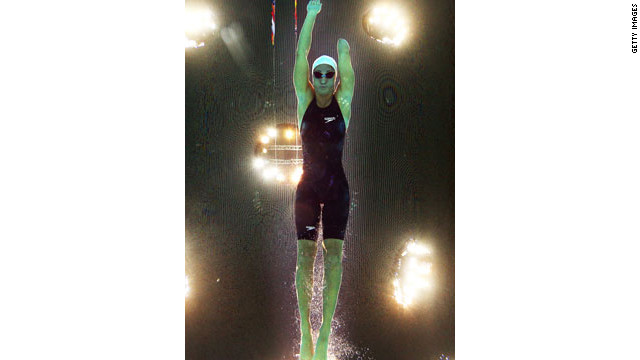 Sarai Gascon of Spain competes in the women's 100m Butterfly S9 on day one of the London 2012 Paralympic Games at the Aquatics Centre. She was up against preeminent South African Natalie du Toit. She placed second but with many races to go, the pair's battle is set to continue. 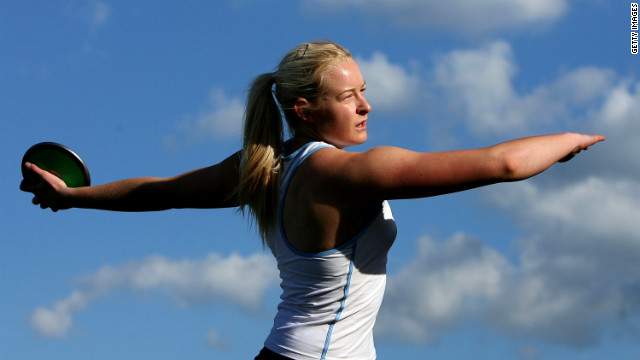 Jess Gallagher is the first and only Australian woman to win a medal at the Paralympic winter games, which she did in Vancouver in 2010. In London, she's aiming for a summer paralympics medal in long jump having come sixth in the javelin.
HIDE CAPTION
Tatyana McFadden
Jessica Long
Sarah Storey
Esther Vergeer
Alexandra Rickham
April Holmes
Sarah Gascon
Jess Gallagher
<<
<

Editor's note: We want to hear from you -- what woman inspires you, and why? She could be another athlete, or a writer, an activist, or even your mom. Leave your suggestions, stories and memories in the comments section below and we'll feature the best on CNN.com.

(CNN) -- The number of women competing in the Paralympic Games has doubled in the last two decades, according to figures released by the International Paralympic Committee.

While at the 1992 Barcelona Games only 700 female athletes were involved in events, London will see a record-breaking 1,513 female paralympians take the stage across 18 sports.

Tine Teilman, Chairperson of the IPC Women in Sport Committee which helps to raise the profile and involvement of women in Paralympic Sport, said: "It is very encouraging that the number of female participants in the Paralympic Games has doubled during the last 20 years.

"I am sure we will see many sportswomen through inspiring and exiting performances become strong role models for others."

CNN has put together a list of eight inspirational women competing in the London 2012 Paralympics. 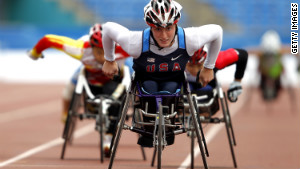 She was born with spina bifida, which left her paralyzed from the waist down. She spent the first six years of her life in a St Petersburg orphanage -- where she walked her hands because she didn't have a wheelchair -- before being adopted a visiting American.

At 15, she qualified for the Athens games in wheelchair racing as the youngest member of the track and field team.

It was her first international competition and she shocked everyone by winning a silver and a bronze. Four years later in Beijing, she picked up three silvers and a bronze.

McFadden races in category T54 events, which are among those for athletes who race or throw from a seated position. Paralympic athletics classifications group competitors into classes that allow them to compete against those with similar impairments.

Won my FIRST gold medal ever at the games!! have no words to describe this feeling. Thanks for all the wonderful support!!!!!!

The 33-year-old Briton, who was born without fingers on her left hand after her arm was caught in her umbilical cord in the womb, has already picked up two gold medals in track cycling at these games.

Storey began her distinguished Olympic career as a swimmer, picking up two golds, three silvers and a bronze in Barcelona in 1992. She swam at the Paralympics in Atlanta, Sydney and Athens adding 10 more medals to her tally.

She switched to cycling in time for the Beijing games, following a serious ear infection in Athens.

She could bag two more medals before the games are over in road cycling, but her success has already been immortalized on a postage stamp issued by the UK's Royal Mail. 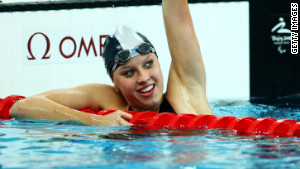 At just 20 years old, Long is already a veteran paralympian.

Long, who was born without any fibulas, ankles or heels and had both legs amputated below the knee at 18 months, began training in her grandparents' pool at the age of 10.

She began her professional career aged 12 at the Athens games in 2004. The youngest member of the team, she wowed the crowds by taking home three gold medals. Four years later in Beijing, the gold rush continued: She won four golds, a silver and a bronze.

So happy with my morning swim in the 400 freestyle. It felt so good. Can't wait to race tonight. Nap time! #london2012

Long is continuing her extraordinary run this games, winning gold in all three events she has so far competed in, with six more to go. 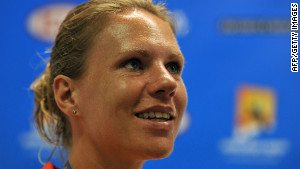 There is little doubt about who the hot seed is in women's wheelchair tennis.

World number one, Esther Vergeer, 31, has dominated the sport for the last three games. Not to mention her remarkable streak of 465 unbeaten singles matches, which spans almost a decade.

Vergeer developed paraplegia when she was eight years old, following spinal surgery. During rehabilitation, she learned to play wheelchair tennis.

In 2000, two years after she made her international debut, Vergeer won a place on the Dutch paralympic team for the Sydney games and went on to win two gold medals.

She repeated her impressive accomplishment at Athens in 2004 and in Beijing in 2008, she won gold in the singles event and silver in the doubles.

Last year she told Athlete magazine: "If you don't try, it will never happen." A motto she appears to have taken to heart. 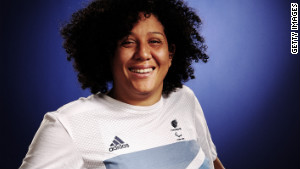 Rickham was left paralysed after a diving accident in Jamaica. Ten years later, while studying in London, she tried her hand at sailing and fell in love with the sport.

In 2007, she joined forces with fellow GB sailor Niki Birrell and the duo have gone on to win four world titles in a row in the two-person keelboat discipline.

They placed a disappointing 5th at the Beijing games and this time round they are determined to bag a medal in the waters off Weymouth.

Accredited and ready to enter the venue.#itsallgoingon 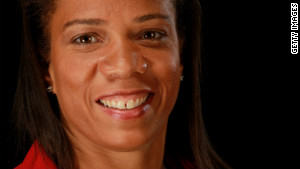 A Beijing gold medal-winner, Holmes has already picked up a bronze in London.

Holmes' left leg was amputated below the knee following a train accident, and she mainly competes in T44 sprint events, for athletes who have an impairment that affects their arms or legs.

Now 39, Holmes won a bronze medal in the long jump in Athens and winning her Beijing gold in the T44 100 meters race.

Sitting still waiting for your event to start, while your bubbling with excitement, is one of the HARDEST things to do!#proudparalympian

The Spanish 19-year-old is a hot contender to take the place of celebrated South African paralympic swimmer, Natalie du Toit -- who will retire following London 2012.

Gascon was born without a left hand or forearm, but took delight in getting in the water from the age of three. By nine, she had started competing internationally and took silver at the Beijing Paralympics when she was 15 years old.

Last year at the European Championships, she won seven medals, but du Toit was not competing at the event and has already taken a gold from Gascon at these games -- in the Women's 100m Butterfly S9 class, for swimmers with physical impairments.

A recent tweet from Gascon shows the elation a paralympian feels after winning a medal. She writes: "So happy! Silver medal with European record! :D Very happy for my "xico?" @josemari88 for 4th place medal!!" 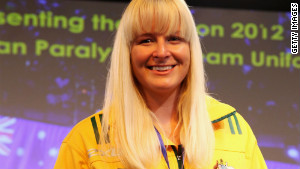 An impressive sporting all-rounder, Jess Gallagher set herself some even more impressive goals for London 2012.

She is the first and only Australian woman to win a medal After winning Australia's first Paralympic Winter Games gold medal in 2010 in Vancouver, where she won the vision-impaired slalom, she is aiming to be the first Australian to win medals in both the Paralympic Summer and Winter Games.

Gallagher, who was told at 17 that she was losing her sight, has so far come 6th in the javelin and so will setting her sights firmly on success in the long jump.

Broke the Paralympic F13 record but a tough day finishing 6th, knee just not playing nice, thanks for all the support, really excited for LJ

WE WANT TO HEAR FROM YOU: What woman inspires you, and why? She could be another athlete, or a writer, an activist, or even your mom. Leave your suggestions, stories and memories in the comments section below and we'll feature the best on CNN.com.