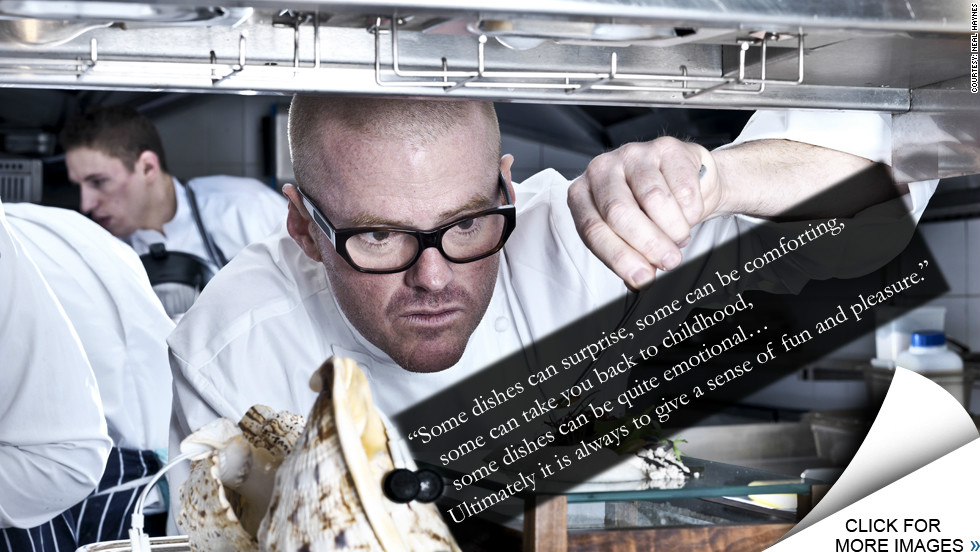 Editor's note: Heston Blumenthal is widely recognized as one of the world's greatest living chefs. His scientific approach to cooking has earned his flagship restaurant, The Fat Duck, three Michelin stars, bringing him as much attention as esoteric dishes like bacon-and-egg ice cream and snail porridge. Here, he reveals the early experiences that helped form his multi-sensory cooking philosophy.

Bray, England (CNN) -- Think about the most memorable meal you ever had. Was it just the taste you remember, or everything else around it?

To me, food is as much about the moment, the occasion, the location and the company as it is about the taste.

It is the only thing we do that involves all the senses. It has the ability to generate so much emotion and so much memory. It has endless possibilities. It is one of those subjects where the more you learn about it; the more you realize you don't know.

I was born in the'60s and grew up in the '70s -- not exactly the best decade for food in British history. It was horrendous. It was a time when, as a nation, we excelled in art and music and acting and photography and fashion -- all creative skills ... all apart from cooking.

In those days there was only one type of pasta you could buy in the supermarket -- spaghetti in a blue wrapper. With olive oil you had to go to the chemist because you never cooked with it -- you poured it into your ears to clear out the wax. I had never eaten an oyster before. I had never eaten lobster. I had never even been to a gastronomic restaurant in any shape or form.

When I was a teenager, we used to go to Cornwall and the south coast of England every year for our summer holiday. Then one year we went to France and I had the lucky experience of going to a three Michelin-starred restaurant with my sister and parents. 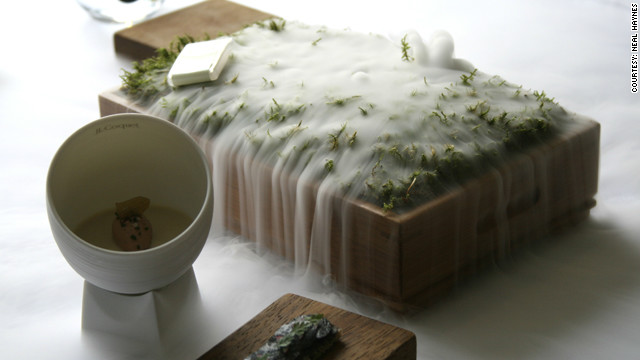 It was as if I had fallen down some rabbit hole into a wonderland. It was just incredible.

We sat outside at the side of a cliff in this valley of olives. There were the trees; the noise of the feet of the waiting staff crunching on the gravel; the noise of the crickets filled the air; the sommelier with his handlebar moustache and leather apron; the wine list the size of something out of the tablet of a Cecil B. DeMille film; the cheese trolley the sound of a chariot. They were pouring sauces into souffles, carving legs of lamb at the table. There was just this whole new world and that was it, that's when I got hooked. It got under my skin.

I questioned everything. I was like one of those annoying kids going 'Why? Why?!'
Heston Blumenthal, chef

I left school with an A-level in art. I had failed my chemistry exams -- so I am clearly not a scientist, but at the age of 18, I got a book written by a guy called Harold McGee, which was all about the science of cooking.

Harold had written a section in the book where he said that browning meat doesn't keep in the juices -- and that flew in the face of all the things I had learned about classical French cooking up until then. So from that moment on, I questioned everything. I was like one of those annoying kids going 'Why? Why?!' Thinking about it now, if I had asked that many questions at school, I would have done a lot better.

So from the age of 18 or so, I was working, saving up. I was doing all sorts of jobs: I started off selling office equipment, which I hated. I did a few other jobs and finally ended up working for my dad as a credit controller -- basically accounting. It was a nine-to-five job, and at half past three every day I guarantee you would find me sitting, snoring at my desk.

I would save for six months and blow it on a two-week trip to France, and it was almost as if I couldn't think about anything else after that.

In those two weeks I would go to restaurants -- I would pick three or four big ones that would cost a lot of money. I remember going down the wine list and thinking, 'Eeek, I cant do that, I cant buy that one," or I'd say 'I'll have that wine but can I just have one glass please?'

Blumenthal makes food that appeals to all of the senses, like this dish "Sound of the Sea," a mixture of seafood using tapioca for sand and served with a little iPod that plays the sound of crashing waves tucked into a seashell.

I opened The Fat Duck in 1995, staffed by just myself and a pot-washer, that was it. I was cooking French bistro things - steak and chips, lemon tart and those kinds of things. My first original dish creation was a just few years before. It was 'triple cooked chips' -- my solution to the problem of why chips go soggy.

And so even though then I was doing bistro cooking, that element of science -- the knowledge of what happens when we cook on a scientific level -- had already started to influence my food.

Along the journey from then to now I was two days away from going bankrupt -- I had to sell a house, sell cars, had to sell everything just to keep the restaurant going.

You kind of kiss goodbye to a life for a big chunk of time. You have levels of exhaustion you just didn't know were possible. I think one week I had just twelve hours sleep.

I'm in a position now that has exceeded anything I could ever have hoped or dreamed for, but I don't even know what it was that was driving me. I didn't really have an ambition; I just wanted to be better and better and better, and it was never good enough.