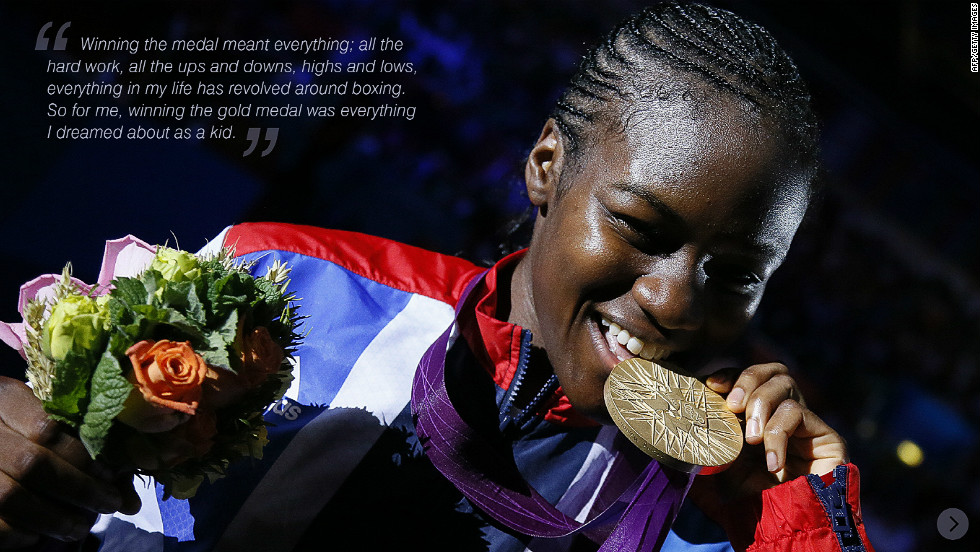 Editor's note: Nicola Adams, 29, is the first ever Olympic gold medalist in women's boxing. In front of a home crowd at the London 2012 Olympics, she fought her way past a year-long injury to knock down Chinese boxer Ren Cancan in the final. Here she reveals how she fell in love with the sport and her heartache when she almost couldn't carry on.

Sheffield, England (CNN) -- Everyone thinks I'm a woman in a man's world, but to me I'm just a boxer doing the sport I love.

It's been with me since I was a child. My dad had videos of all the great fighters -- Sugar Ray Leonard, Muhammad Ali. I watched them winning their Olympic medals and world titles and saw those big crowds and thought to myself, "that looks exciting."

Then one night when I was 12 years old, my mum couldn't get a babysitter for me and my brother, so she took us down to the gym with her. They had an after-school boxing class, so I joined in and absolutely loved it.

Everybody I met down there became like a little family to me. They'd take me to boxing exhibitions and shows, introduce me to new people and we'd all just stick together.

This was so important for my development because it meant I always wanted to be there, I always felt supported and knew that there were people who believed in me.

How Nicola Adams punched her way to gold

You have to remember that being a great boxer is only 50% physical; the rest is mental. You have to be really confident, calm, relaxed and focused. You've got to get in there thinking "I can win. I can achieve this."

My first competitive bout was really fun. I remember peering behind the curtain, peeping out and seeing all my friends and family in the crowd waiting for it to begin.

There weren't many female boxers around at that time, it was very rare, so I just wanted to get in there and perform and show off my skills. That's when I remember thinking, "yeah, I love this sport!"

But it wasn't easy to get to where I am now. All the training from such a young age has been tough. A standard day involves a run in the morning, followed by strength and conditioning exercises -- where I do weights, press ups, pull ups -- and then a boxing session which includes bags, pads, and sparring.

There are times you have to run through the rain and it's cold and it's minus whatever degrees outside, but you just have to get up and you go and do the work.

And on top of that everything you eat is monitored. You can't just go out and have a McDonald's or a pizza when you want, you have to be so strict on yourself.

There's no way of finding the motivation for doing it unless you absolutely love the sport. You've got to really love it like nothing else otherwise you won't get through the training.

That's why I don't see it as a sacrifice. I see it as things I want to do, I choose to do. I choose to not go out clubbing and drinking with my friends because I want to be a great boxer.

Having hardly sustained any injuries in the ring -- just one broken thumb -- I seriously put my back out in 2009 when I tripped over a bandage hanging out of my bag.

I got up and didn't feel in too much pain. In fact, I even went to a tournament and it wasn't until a few weeks later that the pain got worse and worse.

They took me to the doctors and found a crack in one of my vertebrae -- I was out of boxing for a year. I had to have complete bed rest for three to four months.

It was so difficult because I'm a get-up-and-go person. I like to run around, see what's going on. To be laid in bed, brace put on to keep my spine in line, it was really hard to pick myself up again.

The 10 seconds before I was told that I'd won, I already knew it
Nicola Adams, boxer

There were moments when I thought I couldn't continue, but my friends and family helped me through the hard times, and I just managed to make it back in time for the last assessment camp and make the team. It was almost like it was meant to be.

Then came the Olympic final against Cancan. I just remember thinking, whatever she does I'm going to do 10 times better; she throws a punch I'll throw five back. She bought out the very best in me in that match.

The 10 seconds before I was told that I'd won, I already knew it. I could feel it, I was just thinking I can't believe that I've done this; I can't believe I'm going to be Olympic champion in front of my home audience.

Winning the medal meant everything; all the hard work, all the ups and downs, highs and lows, everything in my life has revolved around boxing. So for me, winning the gold medal was everything I dreamed about as a kid.

By putting women's boxing in the Olympics, they showed that women can and should be allowed to do any sport they choose. It's all about equality, it's time for a change.