This debate, which took place at Lynn University in Boca Raton, Florida, is the last for the current election cycle, which will end when voters go to the polls on November 6.

The meme of the evening did not stem out of one candidate's gaffe, but from a well-executed zinger (the words "gaffe" and "zinger" will officially be retired on November 7). Responding to a criticism from Romney about the size of the U.S. Navy, Obama said: "You mentioned the Navy, for example, and that we have fewer ships than we did in 1916. Well, Governor, we also have fewer horses and bayonets, because the nature of our military's changed. We have these things called aircraft carriers where planes land on them."

The hashtag #horsesandbayonettes and parody account @Horsesbayonette quickly followed. Other popular moments included moderator Bob Schieffer slipping up and saying "Obama bin Laden," the repeated use of the word "tumult" and whether or not the U.S. should "divorce" Pakistan. 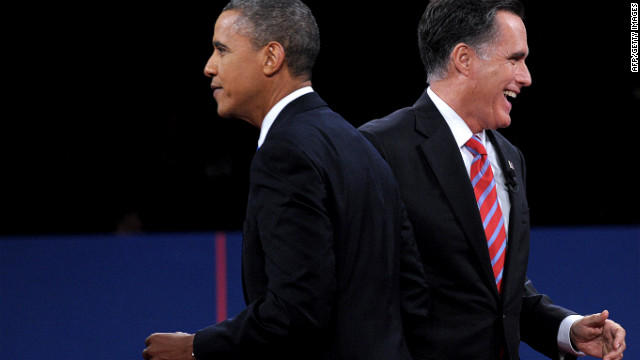 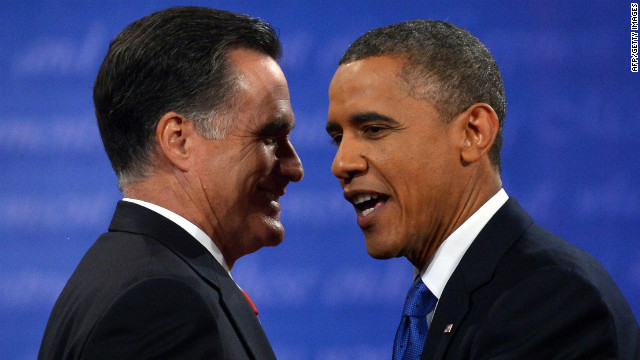 Romney and Obama greet each other at the end of the debate Monday night. 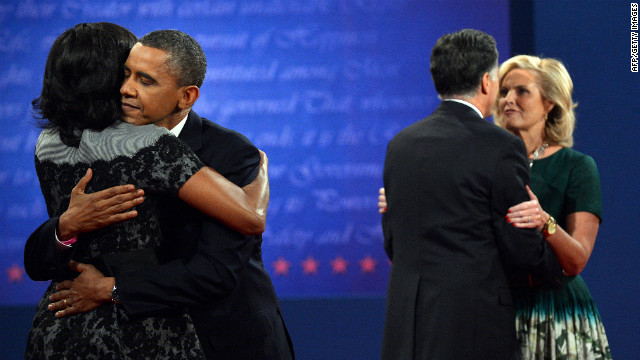 Obama and Romney hug their wives on stage after the debate. 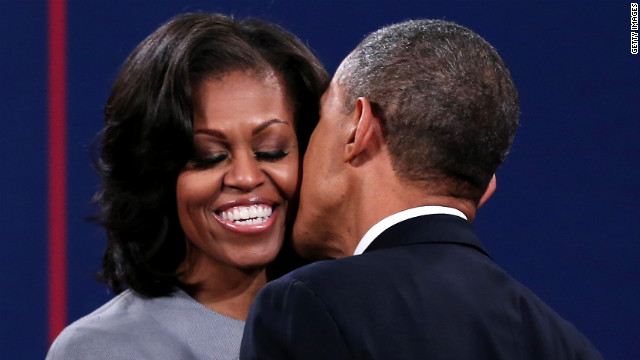 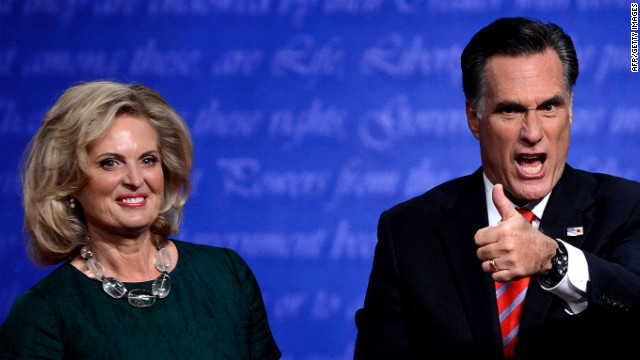 Romney gestures beside his wife, Ann, on Monday. 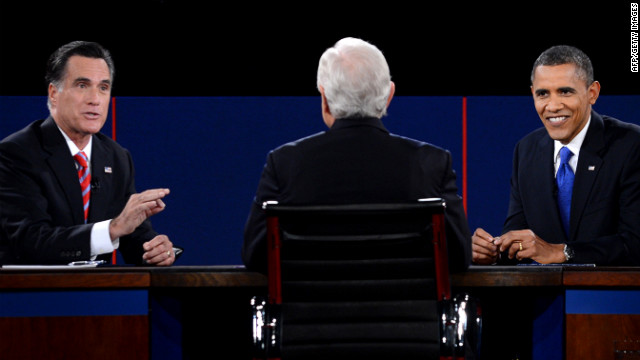 Romney and Obama participate in the debate moderated by Bob Schieffer of CBS News. 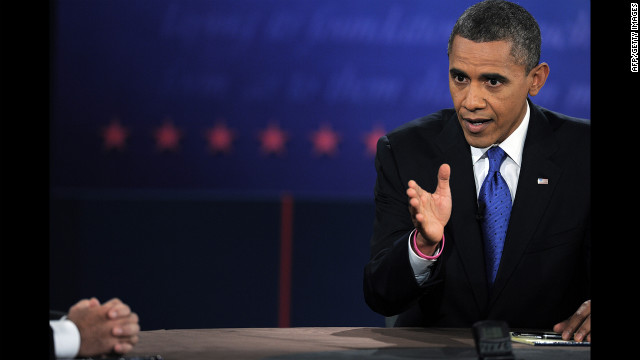 Obama makes a point on Monday. He criticized his opponent on a host of foreign policy issues -- claiming Romney had favored positions that would have hurt the United States. 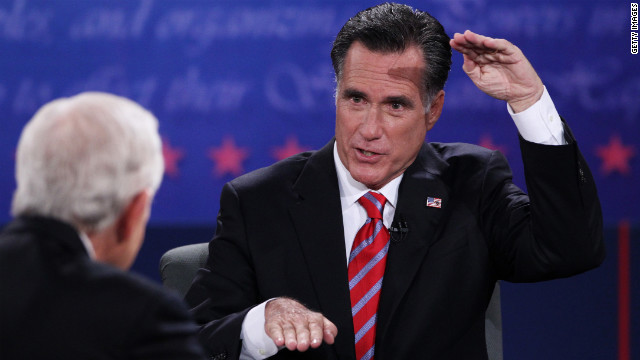 Romney gestures during the debate. The Republican nominee said Obama's foreign affairs policies have made the United States less respected and more vulnerable. 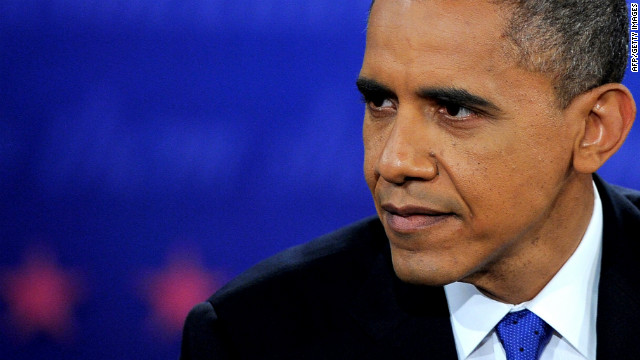 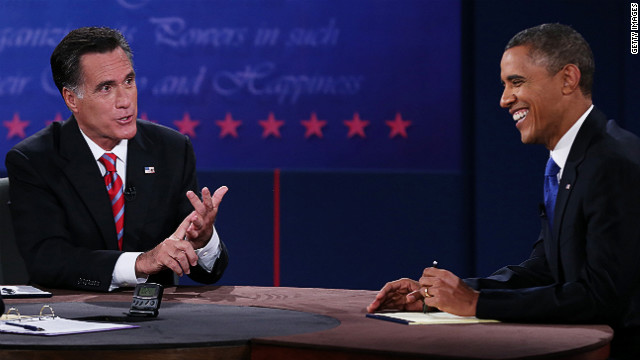 Obama reacts to statements by Romney on Monday. 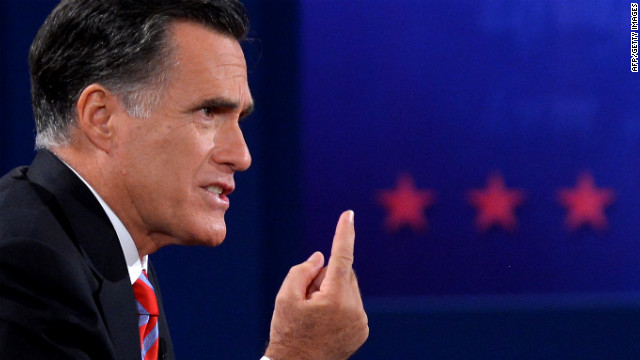 Romney emphasizes a point during the debate. 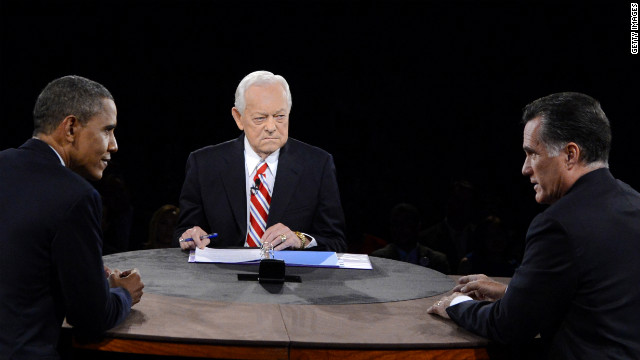 Obama and Romney face off while Schieffer looks on. 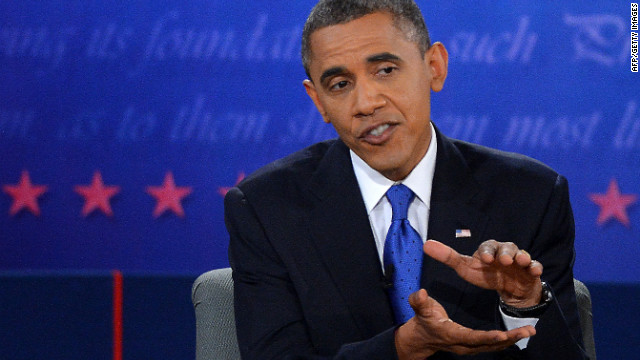 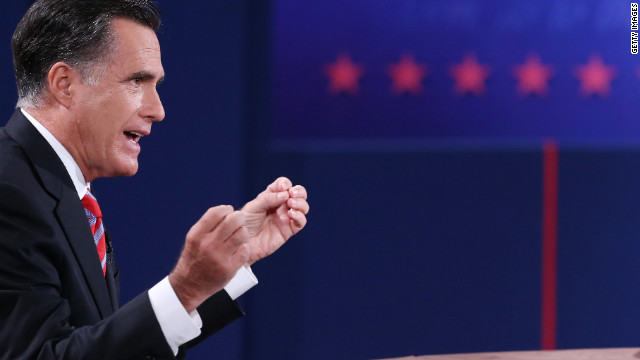 Romney speaks during the debate. 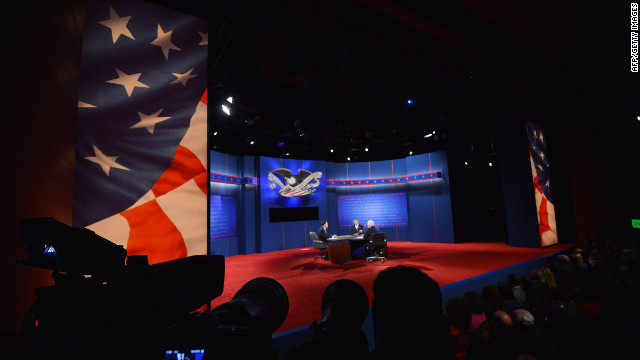 Monday's debate promised to be among the most-watched 90 minutes of the entire 2012 presidential campaign. 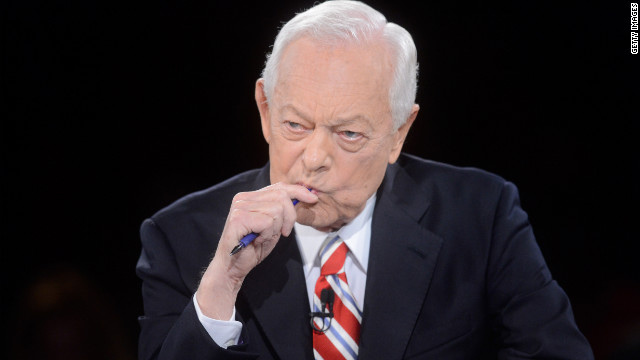 Schieffer listens to the candidates' responses during the debate. 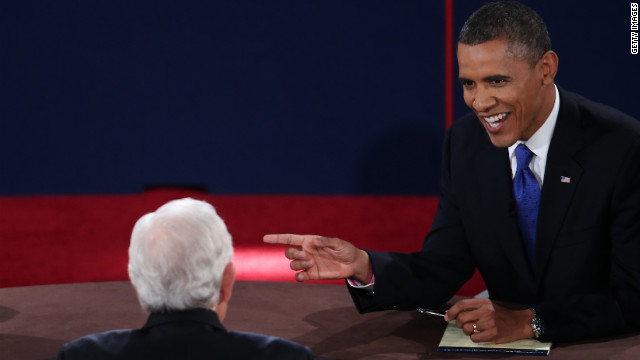 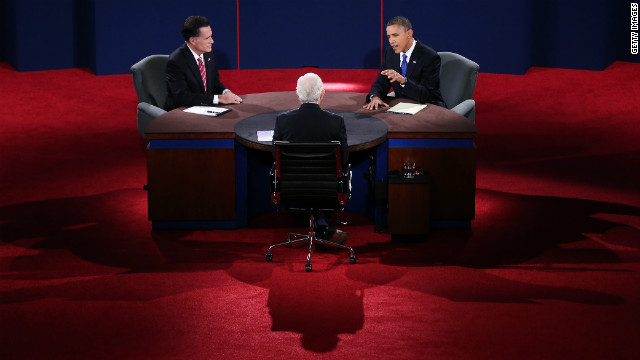 Romney and Obama debate on stage. The final face-to-face showdown took place 15 days before the election. 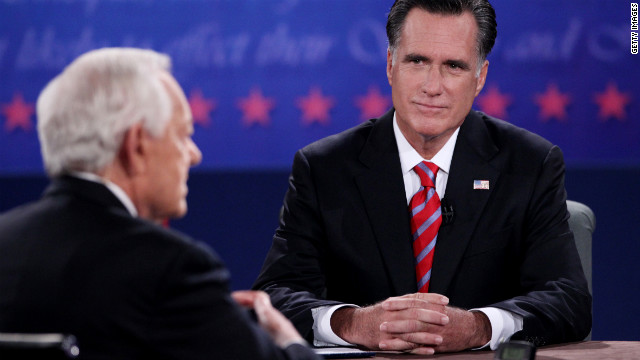 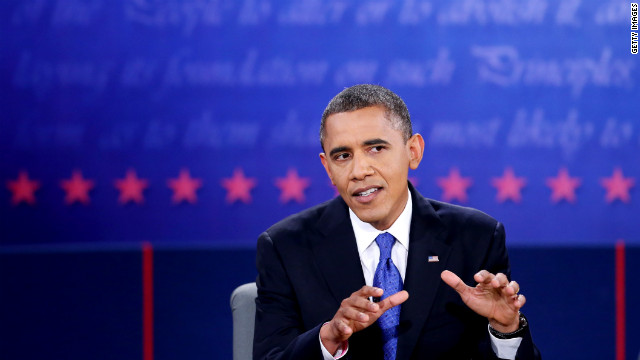 Obama makes a point during the debate. 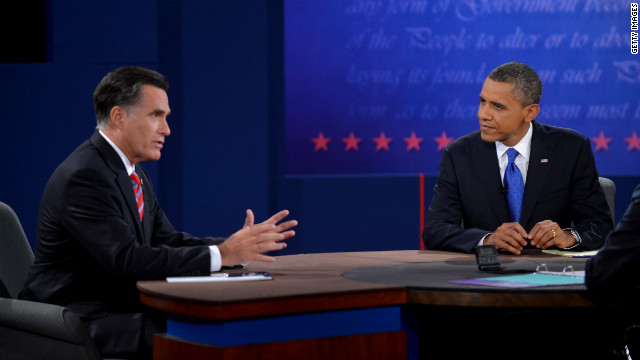 Obama listens as Romney responds to a question Monday. 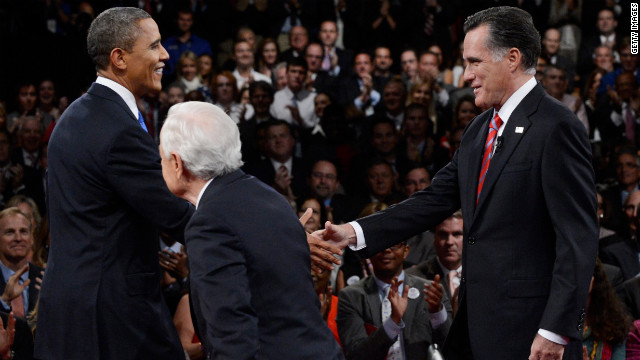 Obama and Romney greet each other as they join Schieffer on stage. 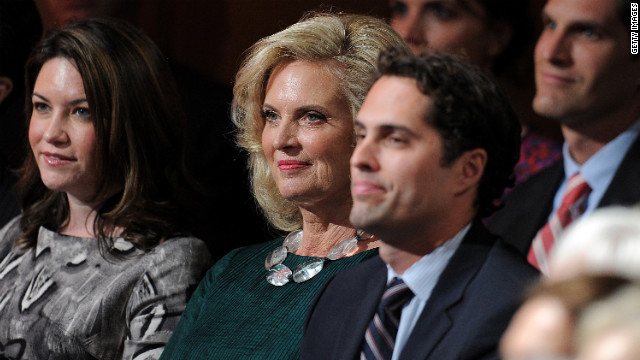 Ann Romney, center, and other members of the Romney family take their seats. 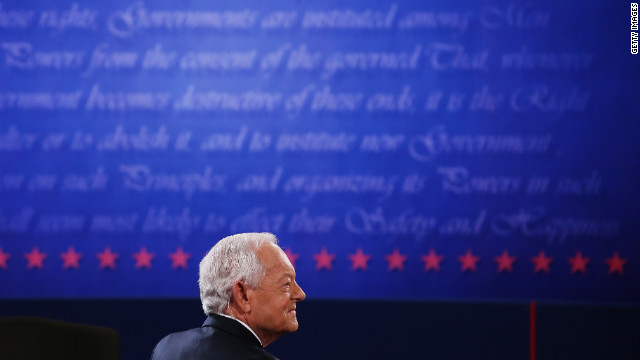 Schieffer appears on stage prior to the debate Monday. He is CBS News' chief Washington correspondent and has been the host of the Sunday morning discussion show "Face the Nation" since 1991. 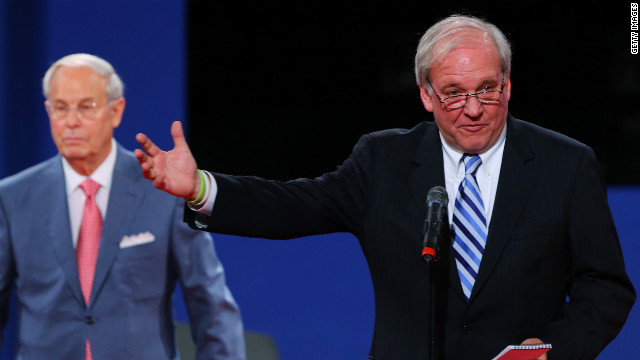 Co-chairmen Frank Fahrenkopf, left, and Mike McCurry of the Commission on Presidential Debates address the audience at Lynn University. 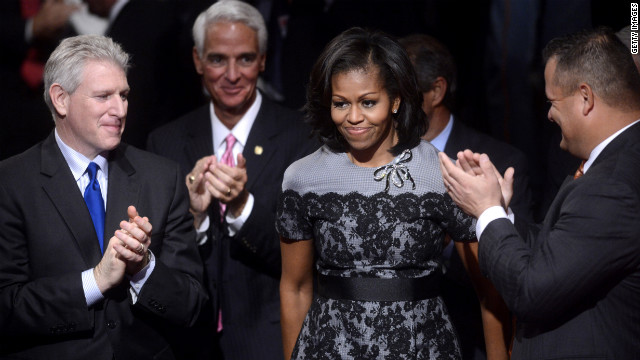 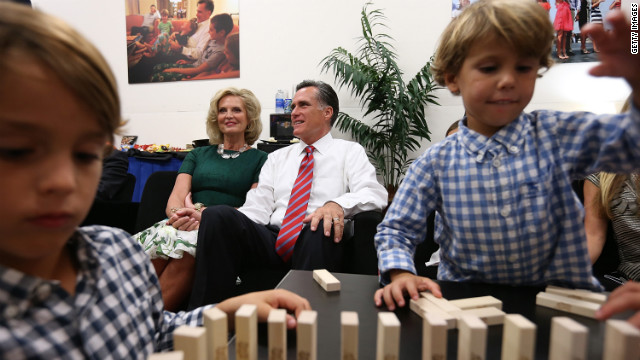 The volume of tweets was a bit lower this round, with 6.5 million tweets sent during the hour and a half event, according to Twitter. The previous debate had 7.2 million tweets, the first 10 million (a record for a U.S. political event).

Patrick W. Gavin -- I'm really going to miss you guys's live-tweeting of debates for the next four years.

Jeffrey Goldberg -- No event in the history of Boca Raton has started later than this debate.

PeterLandau -- Our presidential candidates should be doping. This debate would be greatly improved by performance-enhancing drugs.

wheezywaiter -- This split screen is making it easy to imagine a Romney/Obama Siamese twin.

W. Kamau Bell -- President Obama has that "I have Bin Laden's head in a bag beneath the desk." look in his eyes. #mockthevote #debate

Andy Borowitz -- Both candidates' use of the numbers 1 through 5 underscores the importance of keeping Sesame Street. #debate

David Fear -- "You clearly think the beer in question is less filling!" "No, no, that is not accurate, I clearly said it. Tasted. Great!" #debate

Felix Salmon ‏-- Governor, I'll see you your Mali and raise you a Chad. You're not going to leave Chad hanging, are you?

BradMcCarty -- According to Twitter, the Giants are leading Mitt Romney in game 3.

Hank Green -- The Giants Game 7 is ensuring no one in San Francisco is watching the Debate. How is Mitt ever going to reach them!?

awsamuel -- America, if all you want is a president whose policy is "go after the bad guys", my 6-year-old stands ready to serve. #debate

Ben Greenman -- Romney: "I'm not going to wear rose-colored glasses." As groovy as that would be.

david carr ‏-- Romney: Love me some drones. My drones will dronier than the drones we now have.

Arianna Huffington ‏-- So no daylight at all btw the two on drones and Afghanistan. This is more of a meeting than a debate.

michaelshure -- Latin America is great because it is a time-zone opportunity? WORST PANDER EVER #current2012

Matthew Reichbach -- Obama should have picked up a mic and dropped it after that #horsesandbayonets line.

Cory Byrom -- I saw Horses and Bayonets at SXSW back in 2010. They slayed. #debate

azizansari -- "What are you guys going to be for Halloween?" #BetterDebateQuestions

nickgillespie -- Governor, you get a phone call that Candy Crowley is on her way to moderate a debate. What do YOU do?

Some Dude -- Did we get married to Pakistan during a drunken weekend in Vegas?? Was Zach Galifianakas involved? #debates

anamariecox -- I went on an apology tour once and I was sorry I did.