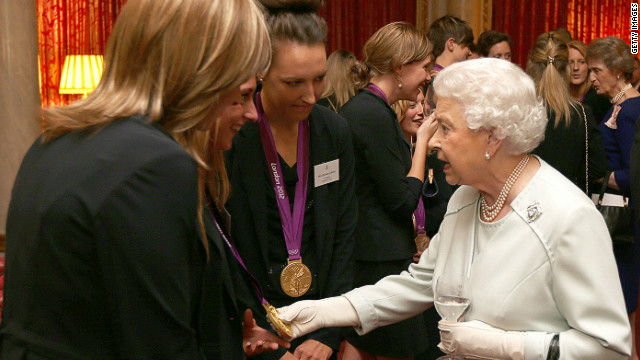 The queen meets British Olympians at a reception hours before two athletes had their medals stolen from a London nightclub.
STORY HIGHLIGHTS

London (CNN) -- Police have arrested a man over the theft of two Olympic bronze medals from a London nightclub, which occurred shortly after the athletes attended a reception with Britain's queen.

British Olympians Alex Partridge, a rower, and hockey player Hannah Macleod have taken to Twitter to appeal for information about the disappearance of their medals from Mahiki, an upmarket central London nightclub, in the early hours of Wednesday morning.

The medals were taken after Partridge and Macleod left their blazers, with the medals inside, unattended as they danced in the club, said a spokesman for the Metropolitan police.

The pair were celebrating with fellow athletes following a Buckingham Palace reception for British Olympians with the queen, the Duke of Edinburgh, the Duchess of Cambridge and Prime Minister David Cameron.

The spokesman said a 29-year-old man was arrested Thursday in relation to the thefts, but the medals had not been recovered. Earlier in the day, Partridge's blazer, but not his medal, was handed in at London police station.

Detective Chief Inspector James Harman appealed for anyone who was in the venue to contact them with information to help recover the medals.

"My team have spoken to both Olympians who are understandably desperate to be reunited with the medals they have dedicated their careers to win," he said.

"If you know who is responsible or where the medals are, please call us."

Both athletes tweeted images taken from the club's security footage of a man present that night. The image has been retweeted thousands of times.

Macleod, 28, tweeted that she was "totally devastated" by the loss. She appealed for the person responsible to simply return the medal to the offices of Great Britain Hockey.

I'm not after punishment.If you picked up a Bronze Olympic medal that isn't yours pls just send anonymously back to GB hockey-Bisham Abbey