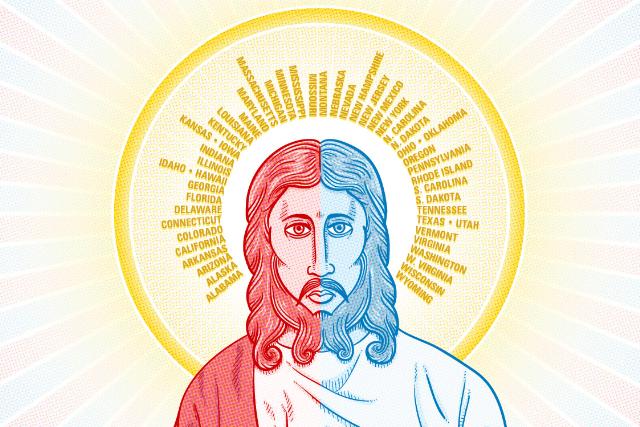 (CNN) -- Here's a presidential election prediction you can bet on.

Right after the winner is announced, somebody somewhere in America will fall on their knees and pray, "Thank you Jesus."

And somebody somewhere else will moan, "Help us Jesus."

But what Jesus will they be praying to: a red state Jesus or a blue state Jesus?

If elections are about choices, so is faith. And in Christianity, liberals and conservatives choose to see Jesus in different ways. Some liberals see Jesus as a champion of the poor who would support raising taxes on the wealthy, while some conservatives think Jesus would be more concerned with opposing abortion and same-sex marriage.

Good luck to anyone who tries reconciling their Jesus with the biblical accounts of his life. Even Jesus' earliest followers clashed over who he was and what he meant.

"He was a man who said many things that were quite cryptic. All Christians tend to pick or chose to emphasize some of his teachings over the other."

Perhaps most Christians follow not one Jesus, but many -- including a bit of a red state Jesus and a bit of a blue state Jesus. We consulted several pastors and religion professors to come up with this voter's guide to Jesus. Answer these questions, click "Submit" and see where you fall on the red state-blue state Jesus scale: