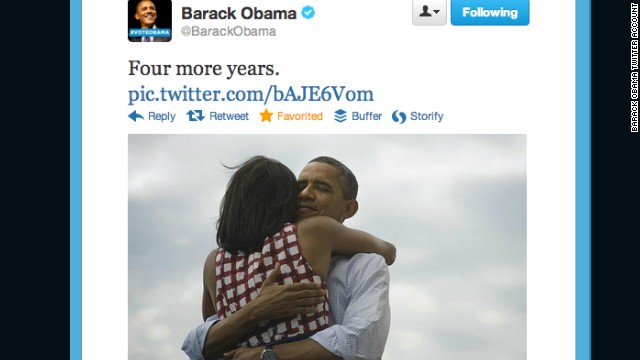 (CNN) -- It may already be social media's most-shared image ever.

The president had tweeted a thank-you message to supporters from the same account moments earlier. But it was the image that captured the world's imagination.

By Thursday the photo had been retweeted more than 785,000 times, topping a previous tweet by pop star Justin Bieber and making it the most popular message in Twitter's brief history.

It also has received more than 550,000 shares and 3.9 million likes on Facebook, shattering previous records held by Mark Zuckerberg's wedding photo in May and this photo of a glass of beer, set up as a tribute to a fallen sailor.

The image shows the president and first lady locked in a heartfelt embrace, framed against a cloudy sky. She's wearing a sleeveless summer dress; he's got his shirt sleeves rolled up and his eyes closed, a smile on his face. It was taken August 15 at an Obama rally in Dubuque, Iowa, during a three-day campaign bus tour across the state.

More than 190,000 commenters weighed in about Obama's post on Facebook. Amid the congratulations and the angry posts from Romney supporters were some praising the photo.

"They are an absolutely gorgeous couple!!! So in love!" said one comment.

The posts reaffirmed the pre-eminence of social media as a crucial communications platform in the 2012 presidential race. Obama's campaign acknowledged his victory on Twitter and Facebook before he e-mailed supporters or addressed a victory rally early Wednesday in Chicago.

The messages also rode a massive wave of Twitter chatter about the election returns. Twitter saw 31 million tweets on Election Day, and hit a peak of 327,452 tweets per minute as Obama was declared the winner.

The Obama campaign has not revealed who took the photo, although it is nearly identical to ones snapped by Jim Watson, who covered the campaign event for Agence France-Presse.