Why Africans will be basketball stars of tomorrow 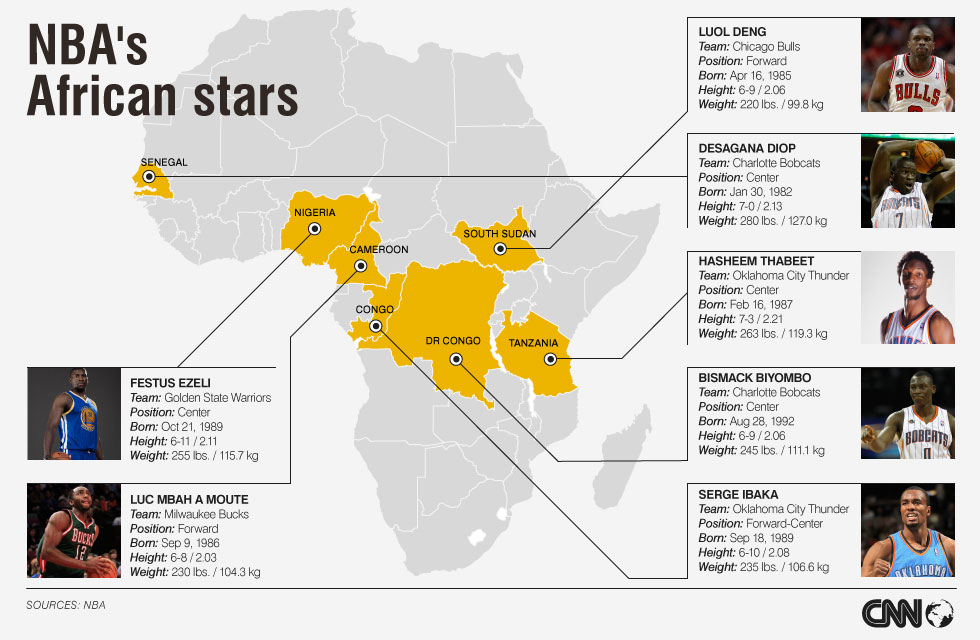 Editor's note: Masai Ujiri is general manager of NBA team the Denver Nuggets. Ujiri is also a camp director for the NBA's Basketball Without Borders Africa program, as well as starting the Giants of Africa foundation.

(CNN) -- As an NBA executive, I'm always looking for untapped potential. As a proud native of Nigeria, I believe that Africa is one of the world's greatest resources in that area.

From Angola and Tunisia to Senegal and South Sudan, there is so much size and athletic ability across the continent.

Some tribes in Sudan and Senegal have an average height of 6-foot-6, which also happens to be the size of the average NBA player. People in Nigeria, Mali and Congo tend to be very big and physical. We need to build a strategy to go into these regions and cultivate the talent through infrastructure and instruction.

Not long ago, soccer in Africa was almost the same way. It was untapped.

Kids in Africa start kicking a ball when they are six or seven years old, if not younger. It's like baseball, basketball and football in America. If you're talented, people will find you. That's what happened with soccer. The number of academies has grown rapidly, and people are really into it. As a result, nearly every major soccer team has a lot of African players.

Through my experience as a Nigerian player, coach and now NBA executive, I believe basketball can follow a similar path. It starts with building facilities. We need to start investing in outdoor courts and indoor gyms for kids to play.

Most kids in Africa don't start playing basketball until they are 13 or 14 years old. This puts them at a disadvantage because they lack the instincts and must work harder to develop the skills and habits formed at an early age.

With a tremendous assist from the NBA, Nike and the International Basketball Federation (FIBA), we have been trying to provide opportunities for the next generation of African basketball players.

Every year, we conduct the Giants of Africa camp, sponsored by Nestlé Milo and Nike, as well as the NBA Basketball Without Borders Africa elite camp. Nearly 100 campers have gone on to play college basketball in the United States, including Luc Mbah a Moute, who now plays for the Milwaukee Bucks.

Mbah a Moute (Cameroon) is one of several African success stories. Serge Ibaka (Democratic Republic of Congo) is a rising star for the Oklahoma City Thunder, and Luol Deng (born in Sudan) was an All-Star last year for the Chicago Bulls. These guys are great examples for young people in Africa. Kids are beginning to see the possibilities because of the exposure of the NBA.

It was unfortunate that Hakeem Olajuwon (Nigeria), Dikembe Mutombo (Congo) and Manute Bol (Sudan) -- three African giants -- came in an era before the internet, cable and satellite television. A lot of African kids have heard of these guys, but they don't know the scope of their accomplishments. Deng, Ibaka and Mbah a Moute are trying to become giants themselves, but they can't do it alone.

I grew up there. I played there. I know how much talent there is.
Masai Ujiri, general manager of the Denver Nuggets

Through the Sprite clinics and Basketball Without Borders, we've been to Congo, Guinea, Kenya, Malawi, Nigeria, Rwanda, Tanzania, Senegal, Uganda, Zambia, and Zimbabwe. On a continent with more than a billion people, we still have a lot more ground to cover, and we need help from sponsors in Africa.

We need more companies to help build courts and gymnasiums for kids to play. Nestle Milo paid for a world-class floor made in the United States. That's what we use for my Giants of Africa camp. For years, Nike has generously provided shoes and equipment for the players. That is the kind of support we need from influential investors in Africa.

As you can probably tell, the push to develop talent in Africa is personal.

I grew up there. I played there. I know how much talent there is. We have to concentrate on building facilities, establishing successful leagues and finding investors to help young players.

America gave me the opportunity, but I truly believe Africa is going to be the next big thing. It is going to be prominent in tapping basketball talent. I really hope I'm alive to see it happen.

This much is certain: I will die trying.

The opinions in this commentary are solely those of Masai Ujiri.