(CNN) -- When Babatunde Osotimehin last year became the head of the United Nations Population Fund (UNFPA) -- the international development agency promoting female rights -- the news didn't go down too well with many women working in the field.

After his appointment Osotimehin was told that some female ambassadors at the U.N. were upset that a man had been made head of the agency. But he was determined to put their minds at ease.

"We had lunch with them [female ambassadors] and they asked me, 'so, justify this position,'" remembers Osotimehin. "I spoke and after that they stood and said 'OK, we're satisfied with that, from today you are an honorary woman.' I carry that title well."

Read: Too many mothers still dying

Osotimehin: A global voice for women

A tireless advocate of female rights, Osotimehin has had a long career caring for women. He qualified as a doctor in 1972 and went on to teach at the University of Ibadan, in his native Nigeria, before heading Nigeria's National Agency for the Control of AIDS and becoming the country's health minister.

U.N. chief on his toughest challenge

Today, as executive director of the UNFPA, Osotimehin, who is also the U.N.'s under-secretary general, is focused on gender equality and reducing poverty, helping hundreds of millions in developing countries.

Some 20 months into his new role, Osotimehin says he wants the agency to reach as many women and girls around the world as possible, improving their access to reproductive and educational services.

"There are an estimate of 222 million women in the developing world who are in union, who want family planning and they are not getting it," he says, citing a shortage of funding and cultural obstacles among the reasons for the lack of universal access to reproductive services.

According to a UNFPA report released last week, meeting the family planning needs of those 222 million women would have resulted in 26 million fewer abortions in the developing world this year. 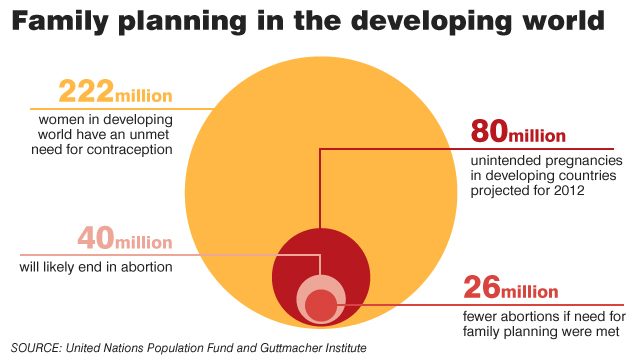 Osotimehin speaks passionately to world leaders about the agency's concerns and works closely with women around the world to make sure they have choices and know their rights.

"I think it's a job that actually was made for me and I say that with all sense of responsibility," explains Osotimehin. "The natural thing to do was now to do something that actually gives me a global sense, given all the experience I have and the natural work that I'd been able to establish.

"And I think linking back to what I did, practicing or as a minister of the HIV field, it was all about reproductive health to reproductive rights, gender, women's health and I think it just all fits."

Read: Energy chief on a mission to end poverty

But above all, Osotimehin, a father of five, says what needs to be changed is the status of women around the world.

"I think that for me is where the problem really is -- how we value women and girls in our societies," he says. "I think that we need to do far more than just legislation or policies, we need to confront these issues to make a difference."

Osotimehin credits his mother for imparting the value of equality to him and shaping his views from an an early age.

He says: "My mother was an entrepreneur, a mother, a wife, a community leader and she was very strong but she believed in equity of social justice, so I saw her as a role model."

Osotimehin adds that whether it's though his current work at the UNFPA or any other posts in the future, he will always fight for women's empowerment.

"I truly believe that women will change the world," he says. "I say that with all seriousness -- as a teacher in a medical school, my best students were women.

"As physicians they are the best and, really, when you look at different aspects of life, even peace-building, women they build better peace. So, let's give them a chance."