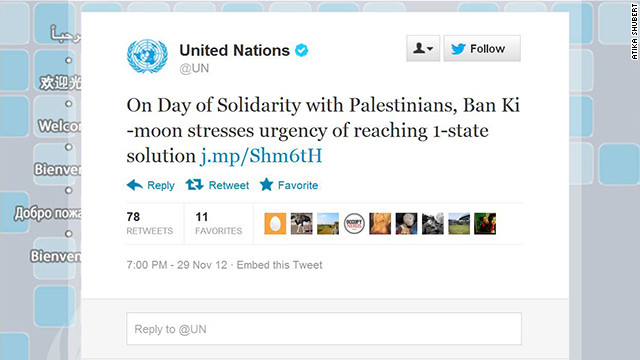 The offical U.N. Twitter account had an unfortunate typo the day of an important vote on the Palestinian Authority.
STORY HIGHLIGHTS

(CNN) -- Hours before the United Nations General Assembly voted to recognize the Palestinian Authority as a non-member observer state, the official U.N. Twitter account made a very unfortunate one-character typo.

U.N. Secretary-General Ban supports a two-state solution. The erroneous tweet was up for more than half an hour before it was taken down and a replacement tweet posted.

The @UN account has 1,129,488 followers and is part of an active social media program run by the U.N.

The person responsible, U.N. information officer Nancy Groves, quickly acknowledged her mistake on Twitter and explained the reason for the delayed correction.

@acarvin @laurenist Sorry all -- terrible typo on my part and then went into a telephone conference call before catching it.

Twitter is an increasingly fertile ground for diplomatic communications around the world. An interesting project from Agence France Presse maps and measures diplomatic tweets around the world on its E-Diplomacy Hub. The project pulls from a database of more than 6,000 Twitter accounts, including heads of state and activists, and maps the communications on a constantly updated map.

You can select a country to see top diplomatic Twitterers and hashtags. An index ranks the most active countries of the past 24 hours.

As Twitter becomes a more common place for countries to communicate, directly or passive-aggressively, typos and mistakes will probably become more commonplace.