How did pregnancy change you? Send your advice for Kate.

(CNN) -- "A nation's joy, a husband's nerves," exclaimed Britain's Daily Mail newspaper, as it contrasted Prince William's anxious wait at his pregnant wife's bedside with the excitement generated by news of her impending motherhood.

The revelation that Catherine, the Duchess of Cambridge, was pregnant came after she was admitted to hospital in London on Monday afternoon suffering acute morning sickness.

The newspaper said the royal couple had hoped to keep their baby news under wraps until Christmas Day, when she had passed the 12-week mark in her pregnancy.

"Kate expectations," declared popular British tabloid, The Sun, with an article detailing the treatment that Catherine, 30, was receiving for hyperemesis gravidarum, a condition that causes more severe nausea and vomiting than typical morning sickness. 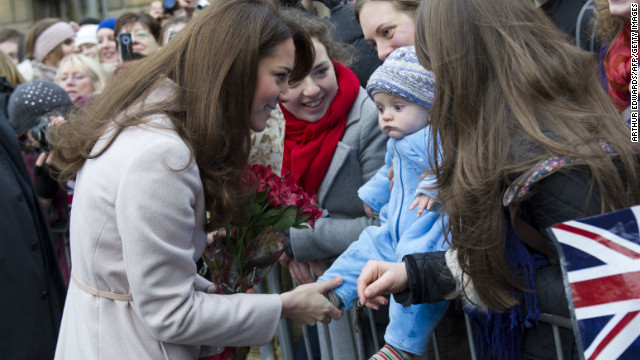 Catherine, Duchess of Cambridge, left, meets 5-month-old James William Davies as she arrives at the Guildhall during her visit to Cambridge on November 28, 2012. Prince William and his wife, Catherine, are expecting their first child, the palace announced Monday, December 3. Click through this gallery to see the her interacting with the younger generation. 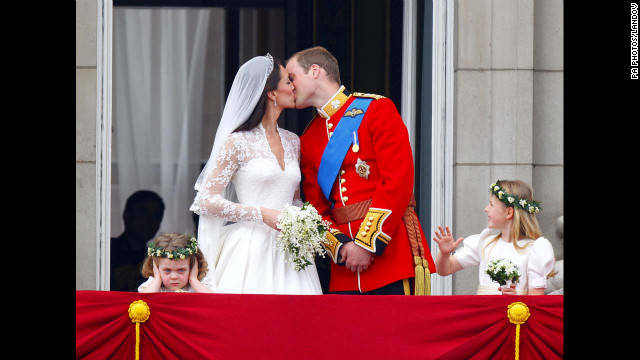 Prince William and Kate kiss on the balcony of Buckingham Palace in London after their wedding at Westminster Abbey on April 29, 2011. Two young bridesmaids, Grace Van Cutsem, left, and Margarita Armstrong-Jones, right, seem to have differing views of being in the public eye. 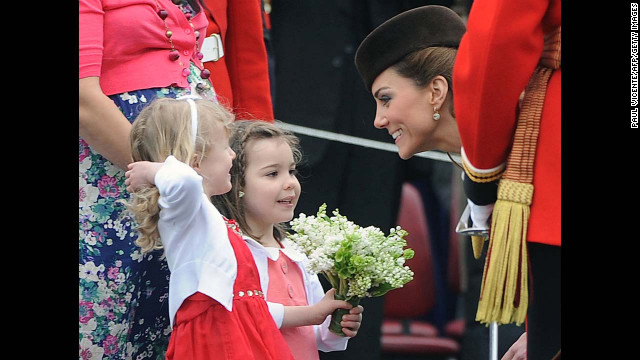 Catherine speaks with two young girls as she presents shamrocks to members of the 1st Battalion Irish Guards at the St Patrick's Day Parade on March 17, 2012, at Mons Barracks in Aldershot. 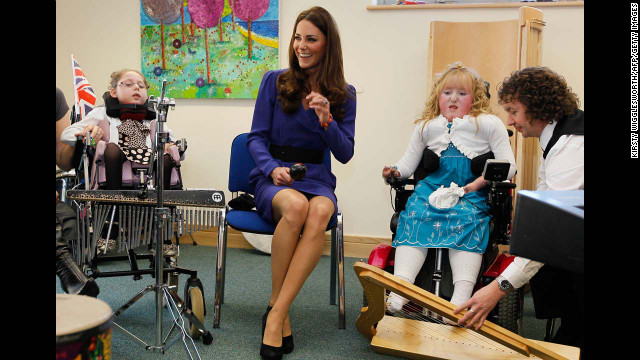 Catherine joins in a music class during a visit to The Treehouse in Ipswich, eastern England, on March 19, 2012. Her visited marked the formal opening of The Treehouse, a children's hospice service for the counties of Suffolk and Essex. 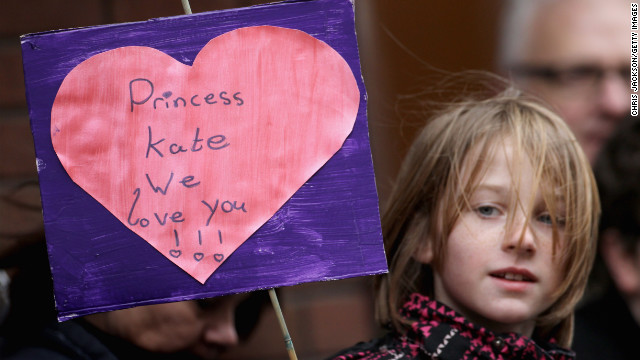 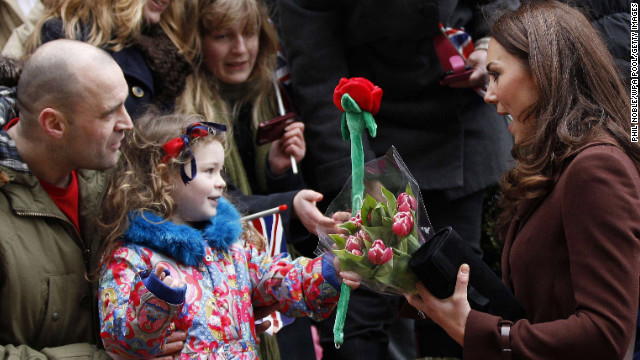 A young girl offers Catherine a toy rose as the Duchess visits Alder Hey Children's Hospital on February 14, 2012, in Liverpool, England. Interacting with children during visits to hospital or charities is a part of official duties that Catherine seems to enjoy. 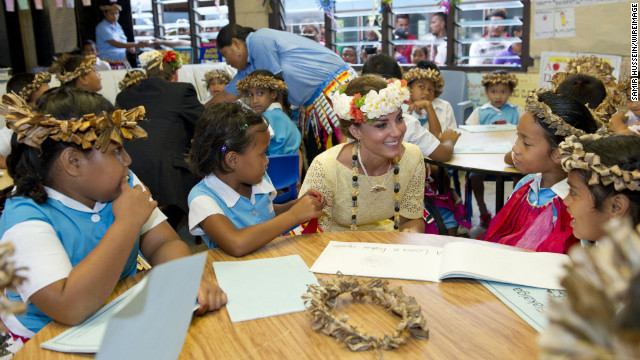 Catherine meets children at Nauti Primary School during the couple's Diamond Jubilee tour of the Far East on September 18, 2012, in Funafuti, Tuvalu. Since her marriage with Prince William, the Duchess has reached out to children and schools all over the world. 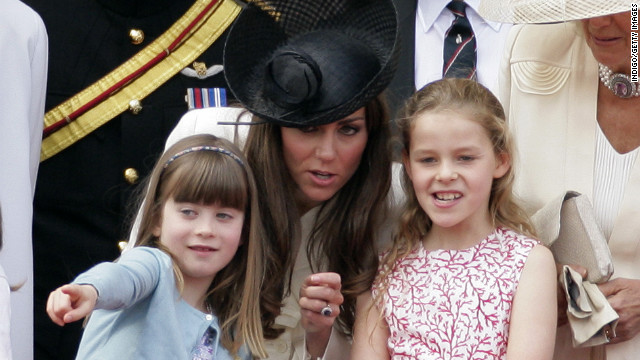 Eloise Taylor, Catherine and Margarita Armstrong-Jones stand on the balcony of Buckingham Palace after the Colour Parade on June 11, 2011, in London. The parade is a celebration of the sovereign's official birthday, although the queen's actual birthday is on April 21. 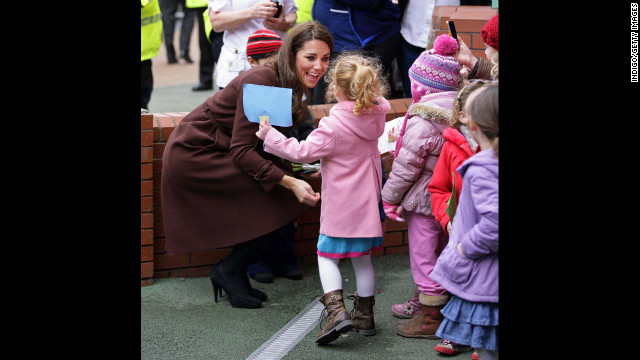 Catherine greets a young girl during a walkabout as she visits Alder Hey Children's Hospital on February 14, 2012, in Liverpool, England. 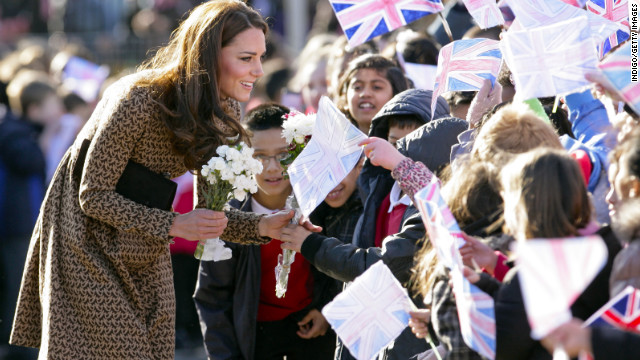 Catherine talks with flag-waving schoolchildren as she arrives for a visit to The Art Room's classroom at Rose Hill Primary School on February 21, 2012, in Oxford, England. Since the beginning of the year, Catherine has become patron of four charities, including the Art Room. 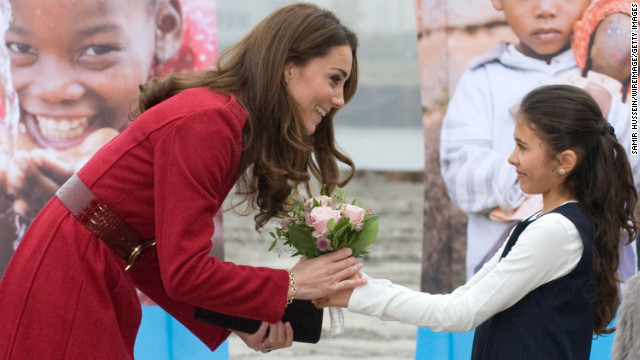 Catherine receives a bouquet of flowers from a young girl during her visit to the UNICEF Centre on November 2, 2011, in Copenhagen, Denmark. 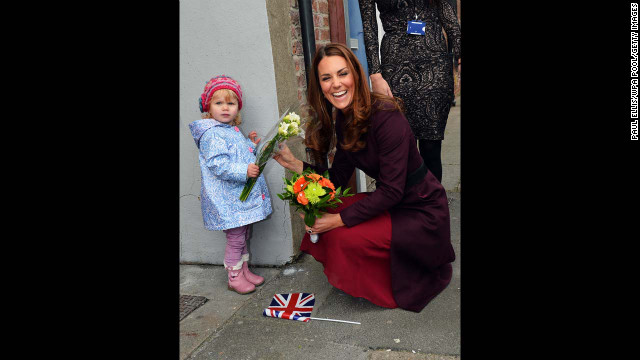 Catherine laughs as she receives flowers from 2-year-old Lola Mackay, who refused to let go of them, during a visit to the CRI Stockton Recovery Service on October 10, 2012, in Stockton-on-Tees, England. 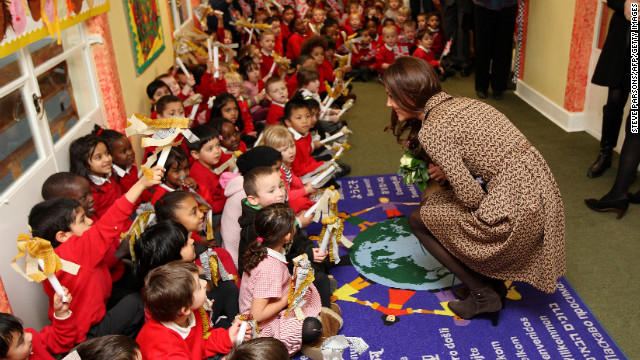 Catherine, right, speaks with schoolchildren during an official visit to the Art Room facilities at Rose Hill Primary School in Oxford on February 21, 2012. 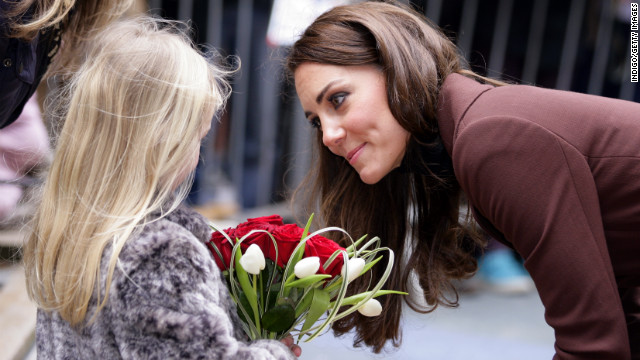 Catherine talks with a young girl as she arrives for a visit to Alder Hey Children's Hospital on February 14, 2012, in Liverpool, England. 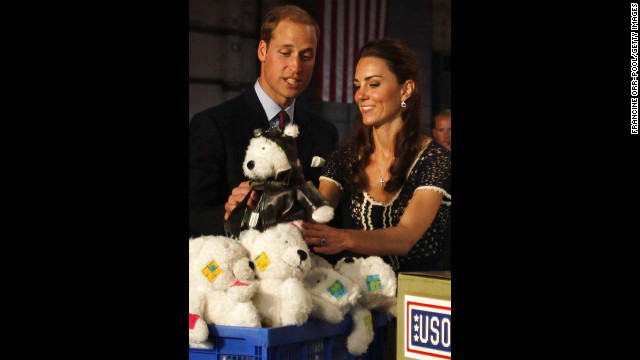 A royal baby on the way

The newspaper said even senior royals, including Queen Elizabeth II, were taken by surprise as the couple had yet to break the news to family.

The Sun's graphics department produced composite images of what they speculated the royal baby would look like as a baby of either gender, while the Mail ran mock-ups created by a U.S. forensic artist imagining how the child might look as a young boy or girl.

The Times also led with news of Catherine's hospital dash, splashing a picture across its front page of a concerned William leaving London's King Edward VII hospital last night. The paper also joined the rush of feverish debate about the future royal's sex, potential name and position in the royal line of succession.

Read: Who can inherit the British throne?

Boy or girl, the new baby will be third in line to the throne, behind William and his father, Prince Charles, who will become a grandfather for the first time. The Times explained that an imminent change to the law means that if Catherine has a girl, the child will make history by being the first British princess not to suffer discrimination because of her sex.

UK tabloid the Daily Express, in a "royal souvenir special" edition, ran a piece speculating that it was more likely that Catherine was carrying a girl, or twins, citing research that linked those outcomes to morning sickness.

Bookmakers also look set for a royal bonanza, with Victoria, Frances and Mary among the frontrunners for the most likely girl's name, though the odds that William's first-born child will be named after his late mother, Diana, Princess of Wales, have been judged at between 9-1 and 12-1, The Times said.

However, Elizabeth is the hot favorite at 8-1, according to leading British bookmaker Ladbrokes. Brooklyn and Chardonnay were listed as long shots by bookmakers.

Ladbrokes has Charles and John at 10-1 when it comes to boy's names, but Harry, the name of the baby's uncle, is a distinct outsider at 33-1.

Bookmakers are also taking bets on the baby's hair color, with one offering brown at 6-4 and red at 8-1, and another offering odds on the likelihood of an albino royal baby.

Bookmakers were also taking bets on the child's birth weight, and the identity of the godparents.

As expected, the name game is a white-hot pastime on social media, with #royalbabynames and #royalbaby among the biggest trending hashtags on Twitter. Among the more amusing suggestions were Cheryl and Jedward, reflecting Britain's recent obsession with television talent shows.

Twitter was also a popular destination for celebrities and public figures alike to voice their happiness at the news. British Prime Minister David Cameron was swift to offer his congratulations.

PM: "I'm delighted by the news that the Duke & Duchess of Cambridge are expecting a baby. They will make wonderful parents." #royalbaby

Congrats to Kate & Will on expecting your first child. The happiest day of your life to look forward to!

Former Wimbledon tennis champ Boris Becker tweeted a picture of himself giving two thumbs up with a message of congratulations.

Two thumbs up to Will and Kate on their baby news. I wish them both the very best.

The news prompted responses from U.S. celebrities as well, with reality TV star Kim Kardashian tweeting her delight at the reports.

Awww so cute! Congrats!!! RT @KhloeKardashian: Congratulations to the Duke and Duchess of Cambridge!! A royal baby!!! :) awwww so sweet

"Royal baby a bonus for special editions," declared The Australian, as it predicted that Australian women's magazines would now go into coverage hyperdrive with a series of royal specials.

"Royal Baby a 'Delight,' Especially to Britain's Tabloids," ran the headline in The New York Times. The paper's Sarah Lyall observed that "speculation began virtually the moment Kate Middleton said 'I will' to Prince William in April 2011, leaving an industry of tabloid newspapers and gossip magazines with a big black hole where their wedding coverage used to be."

Lyall said those who had previously -- and incorrectly -- guessed something was afoot because Catherine was drinking water instead of wine at some official dinner could now finally claim to be right.

The first official portrait of the Duchess of Cambridge has been unveiled - to a mixed reaction from art critics.
Catherine's fashion secrets revealed
updated 5:43 PM EST, Mon January 7, 2013

The Duke and Duchess of Cambridge are intensely private; they are also the most famous couple on the planet. This presents a dilemma.
Why is the duchess in the hospital?
updated 6:09 PM EST, Mon December 3, 2012

CNN's Richard Quest explains how the birth of the baby the Duke and Duchess of Cambridge are expecting will affect the royal family.
Catherine's baby: Heir for new century?
updated 9:58 AM EDT, Tue June 25, 2013

The news that William and Catherine are expecting has positive implications for the future of the British monarchy, says Andrew Roberts.
Q&A: Who can inherit the British throne
updated 10:07 AM EDT, Tue June 25, 2013

Until 2011, any daughter born to the Duke and Duchess of Cambridge would not have enjoyed an equal right to inherit the British throne.
From college girlfriend to future queen
updated 9:50 AM EDT, Tue June 25, 2013

The Duchess of Cambridge - formerly known as Kate Middleton - is the daughter of self-made millionaires from rural England.
See the world though Catherine's lens
updated 7:39 AM EST, Wed November 21, 2012

Wherever she goes, the Duchess is surrounded by photographers. This time, she stayed behind the camera.
Why royal family must protect Catherine
updated 1:34 PM EDT, Fri May 4, 2012

Has Britain's royal family learned from the legacy of Diana, Princess of Wales, as they protect Kate Middleton?
The royal fashion icon
updated 1:34 PM EDT, Fri May 4, 2012

Every time Kate Middleton steps out in public, the fashion world pays attention. Whatever she wears is an instant hit.
Catherine's first speech as duchess
updated 3:49 PM EDT, Mon March 19, 2012

As the Duchess of Cambridge celebrates her 30th birthday, CNN takes a look back at her childhood and her royal romance.