After school shooting, how do we stop the violence? 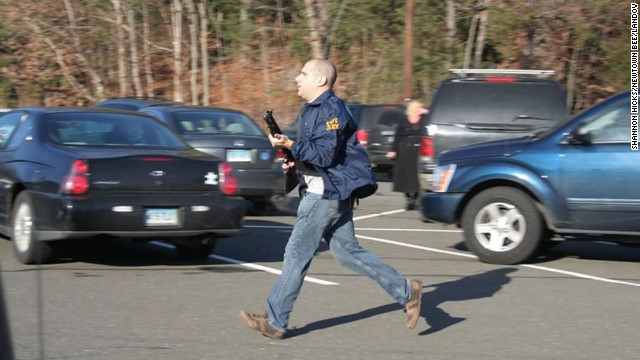 (CNN) -- As the story of the tragic Newtown, Connecticut, elementary school shooting unfolds, many people are pondering: Why has there been so much violence in the U.S. lately, and what can be done to stop it?

This year saw a mass shooting of movie theater patrons in Aurora, Colorado; the sentencing of Jared Lee Loughner on 19 counts, including murder and the attempted assassination of congresswoman Gabrielle Giffords; and the first overall rise in U.S. violent crime in nearly two decades. And as the world heard about the Connecticut school killings, many people took to social media to express their frustration.

these poor children. whatever is going on... can't help but ask: why??? #angry

We're universally shocked and horrified by these tragic events. The question is: What do we do now? A simple search for "WTF?" on Twitter turns up an outpouring of frustration over this story. And the comment threads on CNN.com lit up with debates over gun control.

So now what? CNN would like to hear from you. Tell us what you think needs to be done to help control violence in the world. Where do you think we should channel our frustration? Is it better gun control? Readily available health care? More money for policing and emergency response? Share what you think society needs to do to stop the killing.

Tweet your ideas with the hashtag #nowwhat, or share your thoughts in the comments below. If you're in Newtown and would like to share images, or you have remembrances, please upload them to CNNiReport.com.

Though Congress hasn't passed any gun reform laws in the two years since the Sandy Hook massacre, there's one senator who's made it his mission to push for changes.
Report finds missed chances to help Adam Lanza
updated 2:14 PM EST, Sun November 23, 2014

Adam Lanza was an isolated young man with deteriorating mental health and a fascination for mass violence, according to a report released by a Connecticut state agency.
Newtown a year later: Nation reflects
updated 10:58 AM EST, Sat December 14, 2013

Horror struck Newtown, Connecticut, in such a disturbing way that the nation still struggles with its impact a year later.
At Colt's Connecticut factory, no apologies for arming America
updated 7:20 AM EDT, Sat June 8, 2013

Fifty miles from Newtown, workers hate that their products fall into the wrong hand. But the Second Amendment is sacred here.
Newtown rabbi: We're not 'freaks'

Congress may have defeated tighter gun laws, but states have been passing bills of their own in the wake of Newtown
Timeline: Tragedy unfolds

Details continue to emerge about what precisely happened at Sandy Hook Elementary School. Here is a timeline of events that compiles the latest reporting.
Remembering the victims

An interactive tribute to the victims of the Sandy Hook Elementary School shooting.
Schools get recovery grant
updated 1:12 AM EDT, Sat May 25, 2013

The public school district will receive $1.3 million to help the community recover from the , U.S. Department of Education Secretary Arne Duncan announced.
Documents: Shooter had his own gun safe
updated 9:53 AM EDT, Fri March 29, 2013

Police released new documents related to the shootings last year at Sandy Hook Elementary School in Connecticut, but a motive for the attack by the troubled young man remained elusive.
Son died in teacher's arms
updated 11:26 AM EST, Tue January 15, 2013

Amid the chaos that first-responder Ray Corbo witnessed on Friday, there is one image that he will never forget.
Child shooting victims open up
updated 10:02 AM EST, Thu December 20, 2012

When Lauren Rousseau's boyfriend wakes up, he can smell her perfume.
Teachers were heroes
updated 10:30 AM EST, Tue December 18, 2012

Placing yourself in the path of flying bullets to protect innocents. It's a job description fitting for a soldier or police officer, but not for a school teacher.
Complete coverage