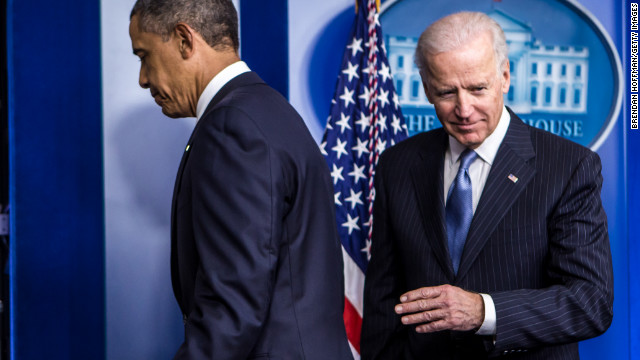 The United States and the sorry state of its political and budgetary process will be the center of attention at Davos, writes Quest
STORY HIGHLIGHTS

(CNN) -- It is that time of the year, again. Come January, as soon as the Christmas trees are taken down and the winter sales flood the shops, the world of business starts thinking about the World Economic Forum -- better known as Davos.

For the past three years Davos has been consumed by the eurozone sovereign debt crises.

Keeping up with Joe Biden

And so questions were asked of other economies: Can China be the biggest engine of growth for the global economy?

Round and round in circles we have gone on these subjects. Frankly, I was starting to wonder if there was anything else to say short of "it's a horrible mess!"

This year there is a new bogey man. The U.S., and in particular the sorry state of the country's political and budgetary process, will, I have little doubt, be the center of attention.

Not just because Congress fluffed its big test on the fiscal cliff, but because in doing so it created many more deadlines, any one of which could be deeply unsettling to global markets.

There are the $100 billion budget cutbacks postponed for two months by the recent agreement; delayed to the end of February. At exactly the same time, we have the U.S. Treasury's ability to rob Peter to pay Paul on the debt ceiling crisis coming to a head.

Read more: Both Obama, GOP set for tough talks ahead

The Treasury's "debt suspension period" is an extraordinary piece of financial chicanery. If we tried it with our credit cards, we'd get locked up. Then there is the expiration of the latest continuing resolution, the authority by which Congress is spending money.

There is the terrifying prospect that all these budget woes will conflate into one big political fistfight as the U.S. faces cutbacks, default or shutdown.

I am being alarmist. Most rational people believe that the worst sting will be taken out of this tail. But not before we have all been to the edge, and back. And that is what the attendees of Davos will have on their minds.

People will be speculating about how dysfunctional the U.S. political process has become and whether it is broken beyond repair (if they are not asking that then they should be).

They will be pondering which is more serious for risk; the U.S. budget and debt crises or the eurozone sovereign debt debacle. A classic case of being between the devil and the deep blue sea.

The official topic this year is Resilient Dynamism. I have absolutely no idea what this means. None whatsoever. It is another of WEF's ersatz themes dreamt up to stimulate debate in what Martin Sorrell has beautifully termed "Davosian language." In short, everyone interprets it as they will.

What I will enjoy, as I do every year, is the chance to hear the global players speak, and the brightest and best thinkers give us their take on global problems. The atmosphere becomes febrile as the rock-stars of finance and economics give speeches, talk on panels and give insight.

Of course nothing comes of these musings, it never does at Davos. That's not the point. This is a chance to take stock and see where the political and economic landmines are in 2013. I like to think of Davos as the equivalent of Control/Alt/Delete. It allows us to reboot.

We leave, at least, with an idea of where people stand on the big issues -- provided you can see through the panegyrics of self congratulatory backslapping that always takes place whenever you get like minded people in one place.

And this year, I predict the big issue being discussed in coffee bars, salons and fondue houses will be the U.S. and its budgetary woes.