Why 2013 could be a game-changer on climate 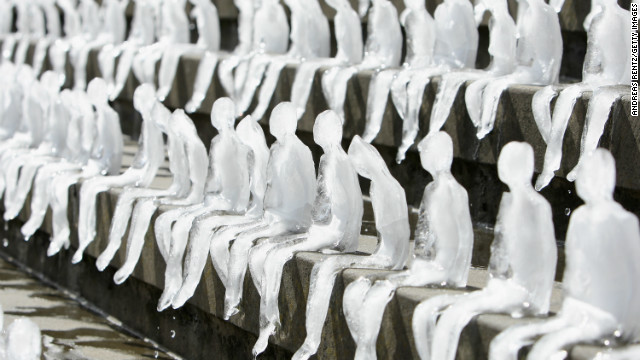 Editor's note: Andrew Steer is President and CEO of the World Resources Institute, a think tank that works with governments, businesses and civil society to find sustainable solutions to environmental and development challenges.

(CNN) -- As leaders gather for the World Economic Forum in Davos, signs of economic hope are upon us. The global economy is on the mend. Worldwide, the middle class is expanding by an estimated 100 million per year. And the quality of life for millions in Asia and Africa is growing at an unprecedented pace.

Threats abound, of course. One neglected risk -- climate change -- appears to at last be rising to the top of agendas in business and political circles. When the World Economic Forum recently asked 1,000 leaders from industry, government, academia, and civil society to rank risks over the coming decade for the Global Risks 2013 report, climate change was in the top three. And in his second inaugural address, President Obama identified climate change as a major priority for his Administration.

For good reason: last year was the hottest year on record for the continental United States, and records for extreme weather events were broken around the world. We are seeing more droughts, wildfires, and rising seas. The current U.S. drought will wipe out approximately 1% of the U.S. GDP and is on course to be the costliest natural disaster in U.S. history. Damage from Hurricane Sandy will cost another 0.5% of GDP. And a recent study found that the cost of climate change is about $1.2 trillion per year globally, or 1.6% of global GDP.

Shifting to low-carbon energy sources is critical to mitigating climate change's impacts. Today's global energy mix is changing rapidly, but is it heading in the right direction?

Coal is the greatest driver of carbon dioxide emissions from energy, accounting for more than 40% of the total worldwide. Although coal demand is falling in the United States -- with 55 coal-powered plants closed in the past year -- it's growing globally. The World Resources Institute (WRI) recently identified 1,200 proposed new coal plants around the world. And last year, the United States hit a record-high level of coal exports—arguably transferring U.S. emissions abroad.

Caution and concern on display at Davos

Gauging risk on the slopes of Davos

Meanwhile, shale gas is booming. Production in the United States has increased nearly tenfold since 2005, and China, India, Argentina, and many others have huge potential reserves. This development can be an economic blessing in many regions, and, because carbon emissions of shale gas are roughly half those of coal, it can help us get onto a lower carbon growth path.

However, while gas is an important bridge to a low carbon future—and can be a component of such a future—it can't get us fully to where we need to be. Greenhouse gas emissions in industrial countries need to fall by 80-90% by 2050 to prevent climate change's most disastrous impacts. And there is evidence that gas is crowding out renewables.

Renewable energy -- especially solar and wind power -- are clear winners when it comes to reducing emissions. Unfortunately, despite falling prices, the financial markets remain largely risk-averse. Many investors are less willing to finance renewable power. As a result of this mindset, along with policy uncertainty and the proliferation of low-cost gas, renewable energy investment dropped 11%, to $268 billion, last year.

What do we need to get on track?

Currently, more than 100 countries have renewable energy targets, more than 40 developing nations have introduced feed-in tariffs, and countries from Saudi Arabia to South Africa are making big bets on renewables as a growth market. Many countries are also exploring carbon-trading markets, including the EU, South Korea, and Australia. This year, China launched pilot trading projects in five cities and two provinces, with a goal of a national program by 2015.

Despite growing demand for renewable energy from many companies, this demand often remains unmet due to numerous regulatory, financial, and psychological barriers in the marketplace.

In an effort to address these, WRI just launched the Green Power Market Development Group in India, bringing together industry, government, and NGOs to build critical support for renewable energy markets. A dozen major companies from a variety of sectors—like Infosys, ACC, Cognizant, IBM, WIPRO, and others— have joined the initiative. This type of government-industry-utility partnership, built upon highly successful models elsewhere, can spur expanded clean energy development. It will be highlighted in Davos this week at meetings of the Green Growth Action Alliance (G2A2).

For technical, policy, and financial reasons, risks are often higher for renewables than fossil-based energy. Addressing these risks is the big remaining task to bring about the needed energy transformation. Some new funding mechanisms are emerging that can help reduce risk and thus leverage large sums of financing. For example, the Green Climate Fund could, if well-designed, be an important venue to raise funds and drive additional investments from capital markets. Likewise, multi-lateral development banks' recent $175 billion commitment to sustainable transport could help leverage more funds from the private and public sectors.

Some forward-looking companies are seeking to create internal incentives for green investments. For example, companies like Unilever, Johnson & Johnson, and UPS have been taking actions to reduce internal hurdle rates and shift strategic thinking to the longer-term horizons that many green strategies need.

Davos is exactly the type of venue for finding solutions to such issues, which requires leadership and coalition-building from the private and public sectors. For example, the the G2A2, an alliance of CEOs committed to addressing climate and environmental risks, will launch the Green Investment Report with precisely the goal of "unlocking finance for green growth".

Depending on what happens at Davos—and other forums and meetings like it throughout the year—2013 could just be a game-changer.

The opinions expressed in this commentary are solely those of Andrew Steer.