Bring drones out of the shadows

Editor's note: Sarah Holewinski is executive director of the Center for Civilians in Conflict, which advocates protections for civilians affected by armed conflict. She was a member of the White House AIDS policy team in President Bill Clinton's second term.

(CNN) -- The president's pick for CIA director -- John Brennan -- is one of a handful of U.S. officials who understands America's covert drone campaign inside and out.

Nearly everyone else is in the dark about the whos, wheres and whys of the program, including most members of Congress. But Brennan is also one of the few U.S. officials who's stood in front of a public audience and tried to explain the targeting of terrorists outside recognized battlefields. And while overseeing a massive use of lethal force, Brennan is also known inside the administration as a moderating voice in the fight against terrorism.

The fact is, Brennan's personal views are as opaque as the drone campaign itself. He may assume leadership of the CIA and decide a clandestine agency should not conduct what is an obvious military operation (a stance I and many others would fully support); after all, a veteran of the CIA may believe the agency should get back to gritty intelligence gathering.

Or, maybe Brennan believes that when it comes to the fight against al Qaeda, the public and its Congress should trust the executive office to protect the American people by whatever means it sees fit.

One way or the other, this week's Senate confirmation hearings should be an opportunity to bring Brennan's views out of the shadows, along with the basic attributes and justifications of the covert drone campaign. The man, the machine and the policy are inextricably linked.

U.S. officials have consistently claimed that offering too many details about the covert drone program could threaten national security. Fair enough; some classification for national security is understandable. But the secrecy surrounding covert drone use is unduly excessive and not in keeping with the transparent government President Barack Obama promised.

Since the bulk of Brennan's hearing will be behind closed doors, the Senate Select Committee on Intelligence has no reason to shy away from asking tough questions about the drone program. It matters that Congress is there to represent the American people. On their behalf, Congress has a duty to ensure the use of lethal force beyond our borders is being considered and carried out responsibly, with due consideration for the harm it may inflict on civilian populations.

Talk Back: Should U.S. be able to kill American terrorist suspects without trial?

Senators might ask a very basic question to Brennan, one that is seldom clearly answered by the administration: "What impact is the drone campaign against al Qaeda and its associates having?" 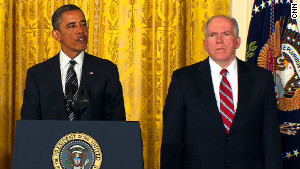 This is a fundamental question of accountability any U.S. official involved in setting or carrying out counterterrorism policy should be able to answer. That answer may describe a dwindling kill list, but it must also put forward facts about what impact drones are having on civilians living under them.

U.S. armed forces in Afghanistan and Iraq learned that the positive or negative impacts of an operation on the local population are an important metric of mission effectiveness. Commanders worked hard to reverse anti-American sentiment caused by a seemingly callous U.S. attitude toward civilian deaths and injuries. In the case of counterterrorism operations, palpable anger toward America would be antithetical to the goal of decreasing the number of terrorists and those who support their cause.

As it stands, it's unclear whether anyone, including Brennan, knows what negative consequences are emerging on the ground because of remote drones.

Rather, claims of low civilian casualties and drone precision capabilities paint a picture of extreme effectiveness in taking out terrorists while sparing civilians. It's true that a drone is precise, meaning it will hit what it is aimed at -- a building, a bunker or a person. But there are valid concerns about whether the target hit is the right one.

Opinion: When are drone killings illegal?

Remote drones likely rely on sources that may be questionable such as video and cell phone intercepts to identify a target. Civilians may be mistakenly targeted as combatants and counted as such because there are no ground troops to conduct a battle damage assessment, interview witnesses or properly identify bodies.

Civilians may also get caught up in so-called "signature strikes" in which operators target individuals based on behavior, not on known identity. This is legally questionable but also has real ramifications for civilians living under drones.

If a civilian in Pakistan doesn't know what behavior makes him a target for U.S. drones, he cannot fully protect himself and his family. If a drone harms his family, even mistakenly, our research shows they won't receive an apology, explanation or any help from the United States. Certainly there will be no love lost for America.

Any deaths and injuries are compounded by psychological trauma, displacement and fear and suspicion among neighbors. One Pakistani told us, "We fear that the drones will strike us again. ... My aged parents are often in a state of fear. We are depressed, anxious and constantly remembering our deceased family members."

Gen. Stanley McChrystal, the former commander of international forces in Afghanistan, recently noted, "What scares me about drone strikes is how they are perceived around the world. ... (T)he resentment created by American use of unmanned strikes ... is much greater than the average American appreciates. They are hated on a visceral level, even by people who've never seen one or seen the effects of one."

The drone program needs to come out of the shadows, with explanations about who is a civilian, who is a target, and how drone operators distinguish between the two.

The CIA should get out of the drone operation business, handing it over to the Defense Department, which has a culture of learning lessons, accountability to Congress and a new openness about civilian protection after 10 years of war in Afghanistan and Iraq.

Drone operators should be trained in civilian protection best practices, and any civilian harmed should receive recognition and help for their losses, in accordance with the values American policymakers have espoused about humanity even during times of war.

The Senate may confirm Brennan as head of the CIA. It should also confirm where he stands on government accountability for lethal force and the CIA's role in the remote drone program.

The opinions expressed in this commentary are solely those of Sarah Holewinski.

This ocean drone can survive typhoons and collect data from the center of the storm.
Forget selfies -- make way for 'dronies'
updated 12:36 PM EDT, Thu July 3, 2014

Beyond military surveillance and warfare, drones have proven themselves useful in a number of ways.
Hollywood to feds: Let us use drones
updated 5:09 PM EDT, Wed June 4, 2014

It's almost entirely illegal to use drones for money-making purposes in the United States. But a little Hollywood magic could change that.
How to shoot amazing video from drones
updated 3:33 PM EDT, Thu May 22, 2014

A bird's eye camera sweeps over the green fields of Ireland, flies over the towering Cliffs of Moher and pans the ocean hundreds of feet below.
Hobbyists pilot small drones for dogfights, photography
updated 11:58 AM EST, Fri January 24, 2014

Ice fishers in Minnesota are reeling from a recent FAA decision prohibiting beer delivery by drone.
Drones will fill the sky
updated 8:56 PM EDT, Tue May 13, 2014

Drones are everywhere. They are our present and our future, especially concerning warfare, Peter Bergen writes.
Drones, lasers and satellites for Internet access?
updated 9:25 AM EDT, Fri March 28, 2014

Two thirds of the world population does not have Internet access. Before Facebook can sign up the rest of world it needs to get them online.
15 ways drones will change your life
updated 5:23 AM EST, Mon November 18, 2013

Apart from what they do for the military; drones have already proven themselves capable sheep herders, delivery boys, tour guides, filmmakers, archaeologists, and -- possibly -- spies.
Drone launches from submerged submarine
updated 9:32 AM EST, Fri December 6, 2013

Deer Trail, a small Colorado town, is considering a measure that would allow its residents to hunt for federal drones and shoot them down.
Drones over America? Time for debate
updated 3:24 PM EST, Tue November 12, 2013

"Live every week like it's Shark Week." Those immortal words come not from the Discovery Channel's marketing department but from Tracy Morgan on "30 Rock."
Photos: Military drones
updated 9:26 AM EDT, Tue August 6, 2013

Click through our gallery to learn more about the varied appearances of drones.
By The Numbers: Drones
updated 9:16 PM EDT, Wed May 22, 2013

Catch up on everything you need to know about drones.
Photos: Drone-makers vie for slice of civilian airspace
updated 8:20 AM EDT, Thu July 12, 2012

Drones are currently a growth industry in the aviation sector, with scores of new companies competing for a slice of the market.
CNN Explains: U.S. drones
updated 3:43 PM EST, Fri February 8, 2013

Here are some key facts about the U.S. drone program, including how and when they are used, and where.
Dronestagram uses social media to highlight strikes
updated 11:12 AM EST, Fri February 15, 2013

The use of drones to carry out military strikes is controversial, to say the least.