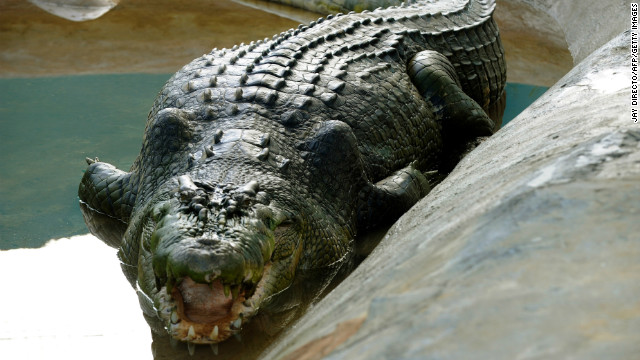 (File) Lolong is seen here in a caged pen in the southern Philippine town of Bunawan on September 21, 2011.
STORY HIGHLIGHTS

That was the phrase echoing around social media on Monday after news emerged the night before that Lolong, the world's largest crocodile in captivity, had died in the southern Philippines.

The outpouring of online shock and grief over the demise of the heavyweight reptile, which was more than 6-meters (20-feet) long, could be considered a little surprising, given suspicions Lolong may have been involved in at least two lethal attacks on people before he was captured in 2011.

But his world-beating size earned him an entry in the Guinness World Records and drew tourists to his enclosure at the Davao Crocodile Park in a remote corner of the Philippine island of Mindanao.

His death, the cause of which is still to be determined by a post-mortem, prompted tributes from top Philippine officials.

Environment Secretary Ramon Paje called it a significant loss to the country's crocodile conservation program, describing Lolong as an "ambassador," according to CNN affiliate ABS-CBN News.

But the 1,075-kilo (2,370-pound) crocodile's legacy will live on, Paje said, since officials plan to preserve his capacious skin so that it can be stuffed and mounted.

Wildlife authorities caught Lolong in September 2011, the result of a long effort to track him down after a young girl was reportedly killed in the Agusan Marsh on Mindanao in 2009. The later disappearance of a fisherman from the nearby village of Bunawan was also linked to crocodiles. Attacks on livestock were also reported.

But it was unclear if Lolong, a saltwater crocodile, was responsible for the attacks, so authorities made him the star of the show at the crocodile park near Bunawan.

He was reportedly named after local hunter Ernesto "Lolong" Conate, who died of a stroke while helping plan the capture of the gargantuan creature.

Before the giant crocodile died, park attendants had noticed that his right stomach was bloated, Edwin Elorde, the mayor of Bunawan said, according to ABS-CBN.

Elorde expressed support for the idea of preserving Lolong, so that villagers "can still see him."