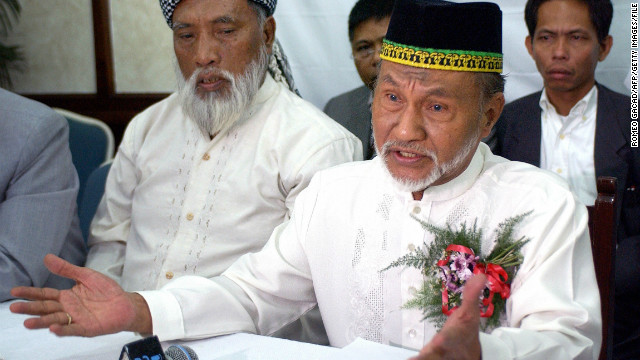 (CNN) -- An unusual standoff is unfolding on the island of Borneo where about 100 men from the southern Philippines have come ashore demanding to be recognized as representatives of a sultanate that has historical claims on the area, Malaysian authorities said.

Malaysian police and armed forces are negotiating with the men, who arrived by boat Tuesday in the remote, eastern district of Lahad Datu, in the Malaysian state of Sabah on Borneo.

The men claim to be the "Royal Army of the Sultanate of Sulu" and say they don't want their people to be sent away from the area, Tan Sri Ismail Omar, the Inspector General of the Royal Malaysian Police, said Thursday, according to the country's national news agency Bernama.

Malaysian security forces have surrounded the village where the men are, and discussions with the group are "proceeding well," Ismail said. "We have told them to leave Sabah peacefully, as we do not want any situation which can threaten the security of the people," he added.

Founded in the 1400s, the Sultanate of Sulu once encompassed numerous islands in the southern Philippines. At one point, it also comprised parts of Borneo, including Sabah.

The historical connection still fuels tensions between Malaysia and the Philippines, with Manila retaining a "dormant claim" to Sabah through the Sultanate of Sulu, according to the CIA World Factbook.

Sulu is now part of the Autonomous Region in Muslim Mindanao in the southern Philippines, an area whose islands come within a few dozen kilometers of Sabah and where Islamic militants groups such as Abu Sayyaf operate.

In 2000, gunmen associated with Abu Sayyaf kidnapped more than 20 people, including Malaysians and Europeans, from a resort on the Sabah island of Sipadan, about 100 kilometers south of Lahad Datu, and held them for ransom in the southern Philippines.

The group of Filipino men cornered in Lahad Datu say they don't want to be linked with any militant group in the Philippines, Ismail said, according to Bernama. But police don't rule out that the men are armed, he said.

"So far the situation is not tense and they appear to be behaving well," Ismail was quoted as saying. "We believe the group has friends in the village but do not have homes there."

Malaysian Prime Minister Najib Razak said it was important that the matter "be resolved without any bloodshed," Bernama reported.

Philippine government and military officials are coordinating with their Malaysian counterparts on the matter, the official Philippines News Agency (PNA) reported Friday.

Abigail Valte, a spokeswoman for Philippine President Benigno Aquino III, said the government is trying to "ascertain the facts" about the situation, according to PNA.

She said Manila was ready to provide assistance to those involved in the standoff after Philippine diplomats in Malaysia had assessed the situation.

The Philippine foreign ministry and the Malaysian prime minister's office didn't immediately respond to requests for comment from CNN on Friday. Philippine military officials declined to comment on the matter.

According to PNA, Manila still claims much of the eastern part of Sabah, which was leased to the British North Borneo Company in 1878 by the Sultanate of Sulu. In 1963, Britain transferred Sabah to Malaysia, a move that the sultanate claimed was a breach of the 1878 deal.