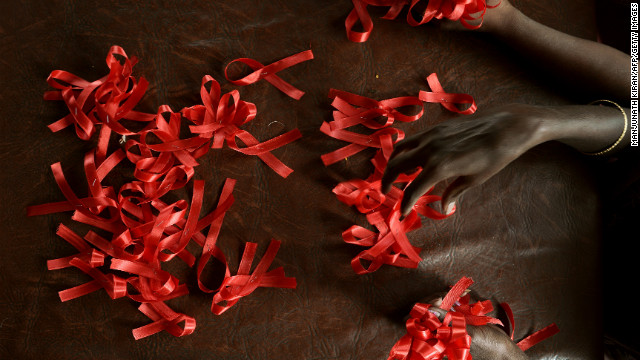 (File photo) Red ribbons, the universal symbol of awareness and support for those living with HIV.
STORY HIGHLIGHTS

Read a version of this story in Arabic.

(CNN) -- The case of a 12-year-old girl who reportedly received a transfusion of HIV-positive blood has sparked outrage across Saudi Arabian society, with angry calls for the health minister to resign.

In this ultraconservative Islamic kingdom, where HIV and AIDS remain taboo subjects and open criticism of government officials is relatively rare, the case of Reham al-Hakami has prompted unprecedented widespread discussion of both issues.

Mohammed Almadi, of the government-backed Human Rights Commission that is investigating the case, said Reham, who has sickle cell anemia, received a blood transfusion on February 12 at the main hospital in Jazan, her village. A few hours later, a team from the hospital came to her house to tell the family that the blood was HIV-positive.

She was then airlifted to the King Faisal Specialist Hospital in Riyadh, the Saudi capital. It remains unclear whether Reham has tested positive for HIV.

"This was a case of negligence," Almadi said.

Widespread online chatter and subsequent discussions in the Saudi media prompted the Health Ministry to issue a statement Monday calling the incident a "critical error" and apologizing to the girl, her family and Saudi society.

The ministry says it is investigating the matter. On Twitter, it said it was "acting on behalf of the family as the legal guardian in seeking compensation and to ensure that the legal procedures and the decisions made by the legal health councils will be carried out in her case."

In a widely circulated six-second online video, Reham, wearing a bright pink T-shirt, says, "I need you to stand by me and pray for me."

Seven ministry officials were sacked and some were fined, including the coordinator of the region's AIDS program, said the statement, which does not mention HIV. It is an unusual move in the heavily bureaucratic kingdom where government institutions usually remain silent in the face of criticism.

"I wish, just once, that a minister would resign over (his ministry's) mistakes" al-Sharian said Sunday on his talk show, which hosted the girl's father and uncle as well as a Health Ministry official. "If a case like this happened in other countries, not just one minister but several ministers would resign."

A local Saudi paper reported that the minister visited the girl in a hospital Saturday and gave her an iPad, a gesture that sparked mocking comments on social media.

The line "hey sorry about what happened so take this ipad and download some apps while you're waiting to die" was posted multiple times by various Twitter users.

An Arabic tweet by Saudi preacher Adel Al-Kalabani said, "this should go into the Guinness Book (of world records) as the cheapest compensation ever." It has been retweeted almost 4,000 times.

Al-Rabiah defended himself on a television program Tuesday, saying the gift was not compensation.

"I couldn't go empty-handed to the hospital to visit her for the first time," he told Saudi news channel Al-Ekhbariya. He said he asked ministry officials who visited Reham every day at the hospital what she wanted, and they told him she wanted an iPad so she could listen to the Quran, Islam's holy book.

"So I asked my colleagues to prepare an iPad and put some games on it as well as the Quran. As a father, if I visited her without bringing anything with me, I would have blamed myself," al-Rabiah continued.

Ibrahim al-Hakimi, the family's lawyer, said the family plans to sue the Health Ministry "starting from the most senior official and including all employees involved in this medical mistake." He said the family was still in shock over what happened.