Chinese bus drivers sentenced after going on strike in Singapore 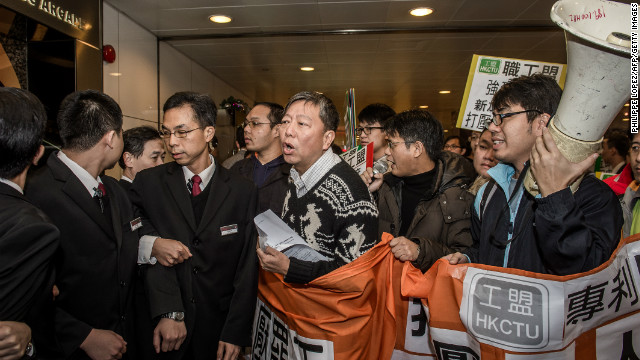 Activists demonstrate against the bid to punish striking drivers at the Singaporean consulate in Hong Kong on December 5, 2012.
STORY HIGHLIGHTS

Singapore (CNN) -- In a case that brought to light issues of unfair pay and poor living conditions among foreign workers in Singapore, a court sentenced four Chinese nationals to several weeks in prison for instigating an "illegal" strike in late November.

The four, who had pleaded guilty, were led from court in handcuffs to begin their terms in Changi prison immediately.

In announcing their sentence, Judge See Kee Oon said it was necessary so as "not to embolden others."

Regardless of their grievances, See said, the drivers "could not justify taking the law into their hands." The strike could have had the potential to "severely affect the lives of daily commuters," the judge said.

See said the cases were "not the forum" to address the workers' grievances.

Worker rights advocates in Singapore say issues of unfair pay and living conditions across many of Singapore's industries, including construction, need to be addressed. In late December the head of Singapore's public bus company, SMRT ,asserted that pay for Chinese bus drivers is "fair" but admitted the dormitory conditions need improvement.

Singapore requires 14-day notice for any strike in an industry considered an "essential service."

In an unlikely moment in court, there was a reference to the Academy awards ceremony and actress Anne Hathaway's speech after winning the Best Supporting Actress Oscar for her role as the prostitute Fantine in "Les Miserables." Deputy Prosecutor Francis Ng said, "Just as Anne Hathaway" hoped the misfortunes of Fantine would someday be found only in stories, "similarly we hope there will be no repeat of a strike among bus drivers."

One of the accused, He Jun Ling, was sentenced to seven weeks in prison as the instigator who had made online postings in Mandarin urging fellow drivers to strike and telling them how to do so. A translation of one of his postings issued by Singapore's prosecutor is titled, "The insults and humiliations suffered by Singapore drivers -- where is the dignity of the People's Republic of China bus drivers?"

The other three drivers, Liu Xiang Ying, Gao Yue Xiang and Wang Xian Jie, were sentenced to six weeks for their role in a "conspiracy" to instigate a strike.

One other accused bus driver -- Bao Fengshan -- was deported after his guilty plea and sentencing in December.

The remaining four had planned to fight the charges in a trial, but two weeks before their trial date decided to plead guilty.

One of the attorneys representing the four said his clients were just happy to see the end of a difficult chapter. Defense attorney Mark Goh argued in court for a reduced sentence, saying that they had not been aware of the 14-day law, and noting that SMRT had not addressed the drivers' grievances.

On November 26, 171 Chinese bus drivers went on strike alleging that Chinese nationals received lower pay than Singaporean and Malaysian drivers in Singapore, and objecting to the poor living conditions in the workers' dormitories. Twenty-nine of those drivers were immediately deported.