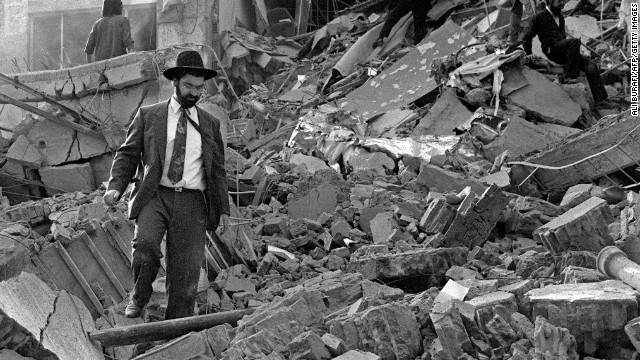 (File photo) A man walks over the rubble after a bomb exploded at the Israeli Mutual Association in Buenos Aires, 18 July 1994.
STORY HIGHLIGHTS

Buenos Aires (CNN) -- Argentine lawmakers approved an agreement with Iran that will create a five-member commission to investigate the deadly 1994 bombing of a Buenos Aires Jewish community center.

The measure passed by a 131-113 vote early Thursday after more than 14 hours of debate.

Prosecutors in Argentina allege that Iran was behind the attack, but a criminal investigation has stalled, in part because Iran denies the charges and has not made the accused available to prosecutors.

Argentina requested the arrest of several Iranians in 2007 in connection with the bombing, including the current defense minister of Iran, Ahmad Vahidi. Interpol approved so-called Red Notices for these suspects, alerting countries around the world of Buenos Aires' desire to have them arrested.

Seeking a way around the impasse, Argentine President Cristina Fernandez de Kirchner drafted an agreement with Iran that would create a "truth commission" and allow the judge and prosecutor in the criminal proceedings to interrogate the accused Iranians.

The government heralded the agreement as a way to find out what happened in 1994.

But the deal had much opposition, including from Jewish groups in Argentina, because the verdict of the commission would be nonbinding. There was also a feeling of mistrust in engaging in a sensitive agreement like this with Iran, a country whose president has denied the Holocaust.

"This is a memorandum that is not clear, that is not complete and that we feel doesn't bring any benefit to the cause," Julio Schlosser, president of the Jewish umbrella organization DAIA, said before the vote.

The deal does not provide a timetable for the commission to form or to hand down a judgment, or provide specifics about the interrogation of the accused Iranians, he said.

The agreement already had the senate's approval, and now becomes law.

It calls for a commission of five international jurists charged with unraveling what was behind the bombing.

"I negotiated this memorandum with who I had to, not with who I wanted to," Argentine Foreign Minister Hector Timerman said. "At each step, I kept in mind that us Argentinians learned with lots of pain that we have to seek justice and not condemnations, to seek the truth and not vengeance."

Opposition lawmaker Pablo Tonelli expressed his disappointment with the measure, telling the state-run Telam news agency that "Argentina will gain nothing from this investigation. The accused will remain free from the arrest warrants issued by Interpol."